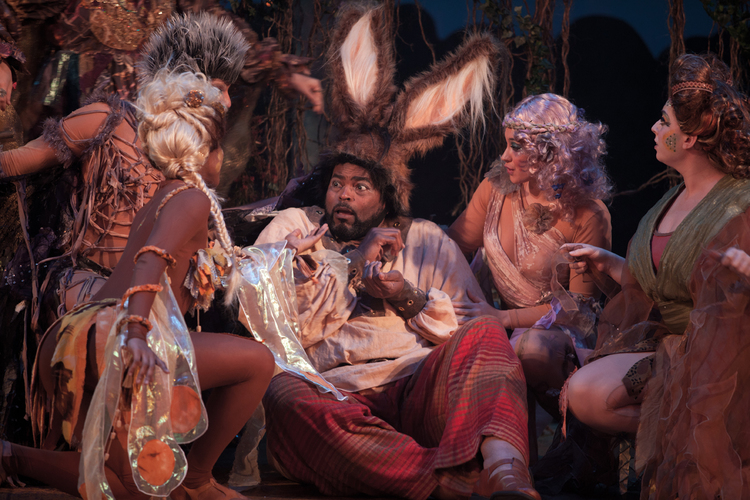 A cappella is a genre that comes with great potential for theatricality. This is supported by the success of groups with an added visual component on The Sing-Off, groups with a fully-devised plot in an ICCA set, and groups like Toxic Audio and The Voca People creating theatrical concepts. Further evidence of a cappella's malleability comes in the form of composer Michael Ching's vision for an a cappella opera, which is mostly uncharted territory; thus, A Midsummer Night's Dream — opera a cappella was born.

A full contemporary a cappella stage work is certainly a modern innovation, though this was not the first attempt. Playwright's Horizons in New York City premiered an original a cappella musical called Avenue X in 1994. In 2012, not long after Opera Memphis's opera premiered, an "Original A Cappella Musical Adaptation" of Midsummer, adapted by Kevin Fox (of Swingle Singers and Cadence fame), Tom Lillington, and D. Jeremy Jordan premiered with Driftwood Theatre Group, a company with a rich Shakespeare tradition based in Ontario, Canada. Though they opened within a year of each other, the two projects were independently conceived and executed. A Midsummer Night's Dream — opera a cappella sets itself apart in that it identifies itself in the operatic genre. Some of you may recall that a live performance of two songs from A Midsummer Night's Dream, I Have a Widow Aunt and Do Not Lie So Near, debuted at SoJam 2009.

For those of you trying to picture this concept by envisioning your local or university group donning armor and Viking helmets, consider this. The definition of opera is the plural of opus, which means "any artistic work, especially one on a large scale." It combines aspects of music, theatre, visual arts, and often literature in its performances. As other lighter forms such as operetta and musical theatre emerged, opera maintained a certain high-brow connotation, separating itself by largely employing traditionally well-trained singers and orchestras and typically being entirely (or almost entirely) sung-through. While Looney Tunes and various television commercials support the stereotypical view of opera, only select operas, including Richard Wagner's Der Ring des Nibelungen (also known as the Ring Cycle), actually deal with Norse mythology, so you may put down the Viking helmet. 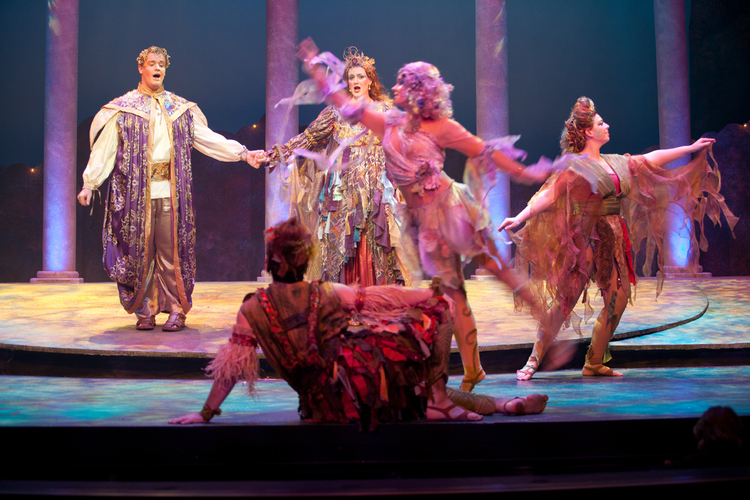 Michael Ching was trained in composition and is perhaps best known for his operas with a wide array of subject matter, including a sequel to Puccini's Gianni Schicchi, entitled Buoso's Ghost. His original works have been premiered by professional opera companies throughout the United States, such as Houston Grand Opera, Opera Delaware, and Pittsburgh Opera, and have been performed in more than thirty states. In addition to his career as a composer, Mr. Ching was the Artistic Director of Opera Memphis from 1992-2010, which connected him with DeltaCappella in a coaching capacity. In an interview, Mr. Ching explained to me that he could see theatrical potential in a cappella immediately and came up with the idea to use this medium in a new opera.

Ching's production and recording employed the use of an a cappella group as its orchestra, or "voicestra". This concept and term was first employed by Bobby McFerrin's group of that name with its formation in 1986, but has never been used in conjunction with a professional opera company. Twenty-five years later, the professional companies Opera Memphis and Playhouse on the Square, and Memphis-based Contemporary A Cappella League groups DeltaCappella (all-male), and the now-retired Riva (all-female) came together to make this concept a reality. [Editor's note: RARB Marketing Director TeKay is a member of DeltaCappella and the voicestra and was cast as Flute/Thisbe in the production.] 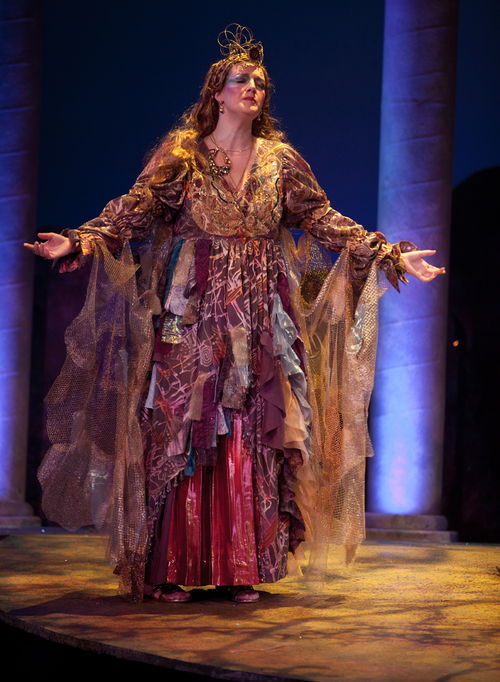 William Shakespeare's comedy, A Midsummer Night's Dream, has been adapted famously in the music world by Felix Mendelssohn for a concert overture and by Benjamin Britten for a 20th century opera. While the original play is five acts, Mr. Ching said he pared down his version to just two, both for the sake of the singers and the audience.

Having limited experience with a cappella groups before DeltaCappella, Mr. Ching said he had to adapt some of his compositional choices accordingly. One of his challenges came in the form of smooth, continuous voice leading; this is not as much of a necessity for instrumental parts, but it is paramount to vocalists maintaining their own tonality, as is the case in a cappella music. Moreover, Mr. Ching said that his early compositional choices for some songs were more complex and utilized more clusters, while his later edits trended toward simplicity for the sake of practicality for his a cappella orchestra and its studio recording.

Another challenge was the coordination of rhythms and syllables to match. Mr. Ching said that some passages would have been double-tongued by an instrumentalist, but in a vocalist, adjustments had to be made either in rhythm or in syllable selection. The voicestra had some input in this process, most notably DeltaCappella's vocal percussionist Paul Koziel, who has a credit in the liner notes for his composition of additional vocal percussion lines. 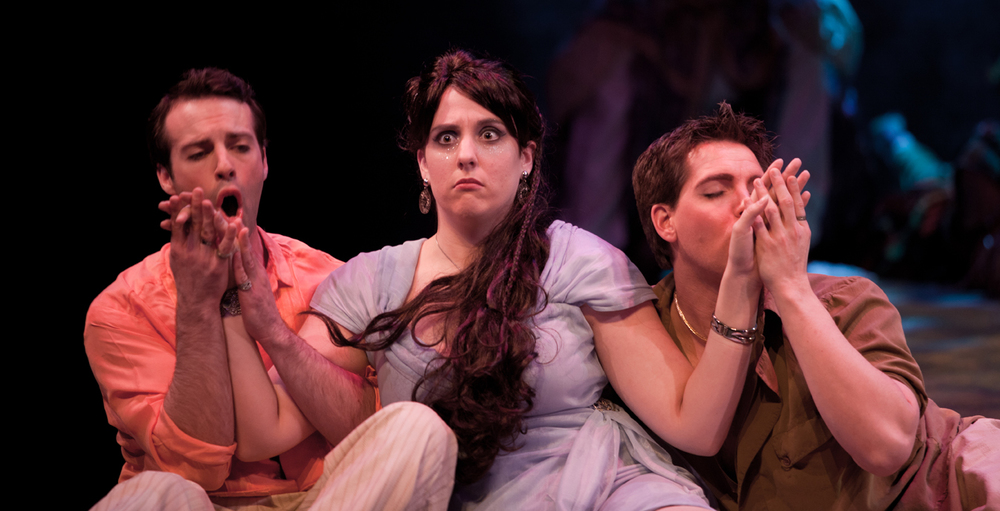 The opera is a fusion of Shakespeare text, a cappella background music, and different soloist styles based on the characters. For example, the characters of highest rank, such as Oberon and Titania, sing with a classical registration, while some of the more subordinate characters, such as Hermia, Helena, and Puck, generally sing in a more conversational style akin to musical theatre. To round out the group, the Rude Mechanicals were sung by members of the voicestra in a more contemporary pop style. These compositional choices create a spectrum that corresponds rank with singing style.

The opera features a healthy mix of catchy motives attributed to particular characters as well as quotations from other works, mostly operas, to serve as music for the play-within-a-play in Act 5 of the original. Almost every word in the opera is sung, though there are some passages that Mr. Ching opted to have spoken, as they served as minor plot advancements and did not require music to carry out their purpose. As is commonplace in modern opera, there are numerous time and texture changes throughout, as well as a spectrum of speech-like and song-like passages rather than black-and-white designations. The work is immensely tonal, which is a help to the voicestra. 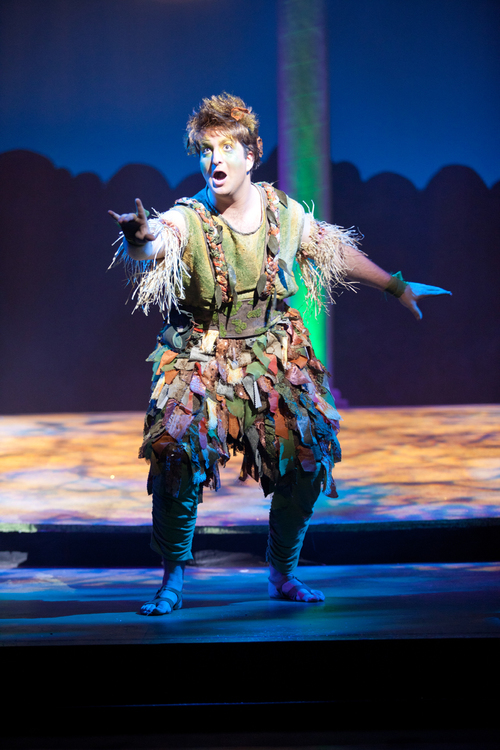 There are some excellent performances and pieces that may be excerpted for various ensembles. Jennifer Goode Cooper's gorgeous vocal color shone through her portrayal of Hippolyta/Titania. John Dooley and Laura Stracko Franks as Lysander and Hermia have a beautiful duet in Act 1, I Have a Widow Aunt, that could certainly be excerpted for a scenes program or part of an eclectic a cappella repertoire. Kyle Huey, as Robin Goodfellow/Puck, is very effective in his characterization, with a crystal-clear deliverance of text and a strong emphasis on expression.

Perhaps even more important than the work itself is what its existence could mean for the future: Mr. Ching indicated another similar project with a Shakespeare tragedy. In general, this meeting of the minds could spur a growth in theatrical projects accompanied by voicestra, or a basis for new projects in the classical meets a cappella realms.

The worlds of classical singing and a cappella singing do not often meet amicably. The type of vocalism used in a cappella is often a more lightly supported sound in order to ring chords. A cappella singers provide all of the music for their concerts, while stage performances have more breaks for others characters' singing and instrumental music. As a result of the style and breadth required for a cappella, singing the genre can be seen as dangerous to one's vocal health. This production, however, was judicious in the breaks given to certain voicestral performers in the score, greatly reducing the risk for vocal fatigue, which ultimately was not a factor in either the performances or the recording.

The results of A Midsummer Night's Dream — opera a cappella are exciting, as they expand the potential of the a cappella genre. I strongly recommend giving the recording a listen, if for no other reason than its powerful uniqueness. Do keep in mind that, if you do not frequently listen to opera or read Shakespeare, it is two hours of music and the language is archaic. But if you have an appreciation for operatic singing and/or Shakespeare, or are ready for something wildly different than the a cappella you're used to, this is must-hear music.

A recording of A Midsummer Night's Dream — opera a cappella was released in August 2014 with Albany Records and is available on iTunes and Amazon. For more information visit operaacappella.com.