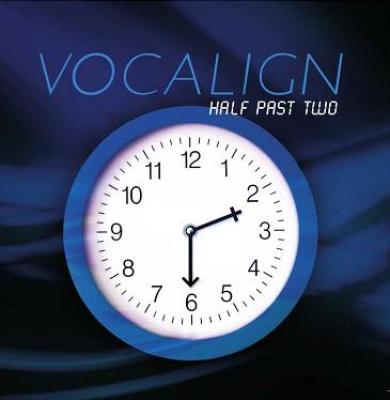 Vocalign has made a recording to be proud of. Elizabethtown College's singers worked hard, chose well and sang their hearts out on this eight-song charmer, which they recorded themselves and sent to Dave Sperandio for mixing and mastering. Everything sounds nice and some things sound really good. Quite an achievement, especially on a group's debut recording.

The opening distortion of Take Me Away shows this group's determination to make a record worth listening to. The track rocks out and sets up the tone of the album, marked as it is by a crystalline female solo, a steady groove and interesting accents embedded in the backgrounds. Percussion tends toward high hats and bass thumps, a somewhat minimalist approach that serves these songs well and keeps the group in the groove and out of trouble.

Two songs later, Erin Healy delivers an incredibly affecting performance of Between the Lines. The women of Vocalign are uniformly strong; Healy's heartfelt delivery and soaring pop vocals put her at the front of this talented pack. The male-led tunes are more uneven. Tubthumping is tons of fun, while The Wait lacks verve and doesn't hold together as well as the rest of the record.

Most of the chosen songs are interesting in themselves and as delivered. I enjoy the a cappella homage of including tunes by Sara Bareilles and Gabriel Mann, as well as the group's performances of Lighted Up and the aforementioned Between the Lines. The 80s showstoppers are far less to my taste, but probably a big part of this group's live successes. I personally find their rendition of Livin' on a Prayer too grating to listen to more than once. Don't Stop Believin' is a much better peformance — but at this point in the Journey chic revival I would be content to wait a decade before hearing this song again.

Vocalign is a new entrant into a crowded market, and they acquit themselves well. Here's wishing them all success on wherever they go from here.

Vocalign's debut album, Half Past Two, sounds very familiar to me. It's not that I necessarily feel like I've heard the co-ed group from Elizabethtown College before. It's more that I've become all too familiar with the pitfalls to which many fledgling a cappella groups succumb.

It's a shame, too, because I really want to like these guys and gals. They have a certain charm about them. They probably spent a lot of time on this album, and to their credit, the album artwork looks very nice. They look like pros on the CD insert — smooth art direction, all necessary credits provided, no tracks listed out of order (a remarkably common problem!). Nicely done.

I also hear some genuine heart coming through in some of the songs! The soloist for Livin' on a Prayer, Trent DeArment, deserves praise for his work. He sounds really nice, and he truly gives his all in the performance. What's more, he (or the group, or both) is aware of his range limitations; a second soloist was chosen for the high part of the chorus. At first, I found this kind of lame, but the more I thought about it, it became clear that this was the smartest, most logical way to address the issue.

Also, the soloist for Lighted Up, Glenn Knight, is wonderful, warranting the record's only "above average" track.

Unfortunately, the aforementioned pitfalls mean significant detriment to the quality of this album. I can note three major issues.

The first is the song selection. At only eight tracks deep, Half Past Two better deliver some quality material. Instead we get three overdone karaoke favorites and some unspectacular fillers to round out the setlist. The groups that are able to stand out — especially new ones — are the ones that challenge the conventions of a cappella. They do songs no one can believe they're trying. Even if they're not as comfortable with the material, they're MUCH more bound to get noticed. I'll be honest: if I want to hear an a cappella version of Don't Stop Believin', I'm cueing up the UNC Clef Hangers. Only the best of the best can make these types of songs sound fresh.

The second issue is that the group presumably decided to make an album and get themselves out there before they were ready to do so. I don't blame Vocalign for wanting to make themselves known, but producing an album is no small feat. If you listen closely to the singers, you'll notice that they probably need to spend some more time studying their music. Rhythm is by far the biggest issue; sloppy entrances abound, which, when coupled with the perfectly sampled percussion, sounds very awkward. There is also a general lack of musicality: dynamics, phrasing, vowel placement, etc., need serious work. When there are fundamental issues like this, you're bound to try to cover them up, which leads me to my third issue.

Audio engineers are mostly full of good intentions, but they're still businessmen, and they're not about to turn away revenue. They're gonna churn away until your album is produced and out the door, chewing up thousands of dollars in the process. Very few will tell you that you're not ready to make a record. Instead, they'll use ProTools to make the issues go away! Young groups may not fully understand that this isn't a foolproof plan. There are several moments on this record where some slick work actually makes the song sound worse. The recurring bass riff in Tubthumping, for example, was evidently sampled. Problem is, those several passes at the riff were out of tune, making the entirety of the song virtually unbearable to stomach. Even worse may be the sampled descending guitar licks in Don't Stop Believin', again perpetually out of tune, looped endlessly in alternating ears on my headphones. Come on, guys. Surely someone does that solo in your live performance. Do a few takes until you've got it down!

Vocalign's Half Past Two is clearly a novice attempt at making a record. I can't in good faith recommend this album, but keep an eye out for them. They do, as I said, have a certain "something" that makes them likeable — maybe it's youthful exuberance. Pardon the cliché, but I have a feeling they'll be back in a big way.

I realize this is damning with faint praise, but it's a testament to how far a cappella has come in the past ten years or so that an average album can sound this good. That pretty much sums up my review: Half Past Two is a fairly nice-sounding album from the mixed group Vocalign. It's by no stretch of the imagination an envelope-pusher, but it does employ some modern techniques to its advantage to help it become a nice-sounding album.

Let me focus on the nice things first. The singers are nearly always in tune; the music doesn't hurt the ears. None of the soloists are bad, and several of the soloists do a respectable job. The balance is nice between soloist and backups. The vocal percussion is spot-on, with a bit of what I term "computerized VP" (sampled drum hits), but not so computerized that you can't tell the sounds were man-made. Computer effects are also employed on occasion in ways that work — an "electric guitar" part in the middle of Take Me Away springs to mind. It sounds pretty cool. If you are familiar with the group, I don't expect anything on the album will let you down — especially considering this is the group's "first official album", as the liner notes say.

Unfortunately, I must move on to my complaints now. Many/most albums that I listen to repeatedly end up growing on me. Unfortunately this album did the opposite: I have now listened to it about seven times through, and I like it far less than after my first listen. A large part of my problem with the album comes from its predictability. For example, the song choices are mostly unimaginative. Three of the eight songs are ones for which I have other collegiate a cappella covers. Two of the remaining songs are ones for which I thought I had a cappella versions, but was surprised to find out that I didn't. That is because the arrangements presented here are so standard that they sound like music I just must have heard before. That only leaves three songs that are new to me; these are Something's Gotta Give, The Wait, and Lighted Up. One of these three (Lighted Up) suffers from the worst tuning problems on the album, which leaves two new songs for me to like. Not too thrilling.

None of the arrangements make me perk up. The group alternates between male and female solos. The standard arrangement for a female solo song: male bass line mimicking a bass guitar, and tenors & altos singing backup syllables. For a male solo song: male bass guitar line, and altos & sopranos singing backup syllables. Although the arrangements are nearly all vanilla, one arrangement that I do feel works well for the group is Tubthumping, where the song naturally alternates between male and female soloists.

These complaints are either a symptom of, or a result of, another serious problem of the album: there's no real passion anywhere. I can't even tell that the singers are enjoying what they are doing! I've probably quoted my old choir director's "First Law of Performance" before on this website, but it bears repeating: "Thou shalt not be boring." Unfortunately, after several listens to the album, I must conclude Vocalign has violated this commandment. And so, while the album is fine as far as it goes, I cannot really give it my recommendation.