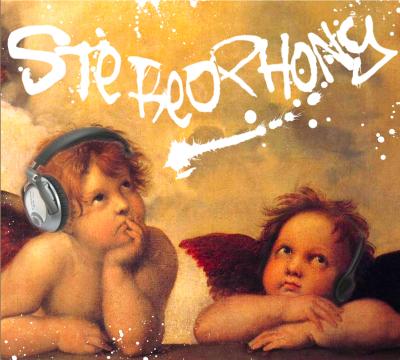 Good songs make a good album. A couple of kickin' dance numbers and a nice — gasp — medley make Stereophony one of the most accessible college albums I've heard this year. The Chorallaries sing well and do some good work in the studio with this one. I'd recommend it as a whole, and even more so by the individual song.

Here are the best tracks to download: Read My Mind, Come Around, maybe High and Hot Air Balloon, and definitely the Love Drunk/Battlefield medley. That paired number is a ball: energetic, nicely arranged, and very well sung. Tiffany Cheng is great on the second-half solo, and the whole number sparkles. I particularly like the stripped down chorus toward the end of the Battlefield segment: it's the kind of good singing and good texture change that makes you sit up and smile, no matter what else you're doing when the track comes up.

The Chorallaries have great energy in general. On Come Around and Read My Mind, I think their performances rival the originals in terms of catchiness and heft, if not in full-on rock and roll polish. Read My Mind benefits from a female solo (Tess Wise) that in my view outstrips the goofy tenor in The Killers. Plus The Chorallaries' arrangement uses up the good bits from The Killers' big hit, that "I've got soul but I'm not a soldier" lick that turns up all over the place these days.

Come Around is also fun, with an asterisk that Santa Claus scat solo that turns up twice. "You better watch out, you better not cry" — who can keep of straight face? It's like in The Engineers' Drinking Song — how does your man stand up on the surfboard after demolishing 40 pints of stout? But never mind. In other errant similarities, the soloist on Harbor has a distinctly old-time covered tone, like Gillian Welch or Uncle Earl's Rayna Gellert, which makes it hard for me to take the whole song in stride. I do like the percussion on that number, holding a steady three-beat throughout, and showcasing the rhythm skills that make all of Stereophony such a fun listen.

One of these years, some enterprising MIT group is going to really rehearse that drinking song and polish it up good, instead of just adding it on as a glee club mashup at the end. The glee clubs have gotten better, but so have the rock songs, so its skill lag has continued more or less the same.

Drinking songs aside, this is a fun album and a good buy for anyone who's into this stuff. Sing on!

The Chorallaries struggle on Stereophony, but are blessed with a few powerful soloists who, if you fall into their spell, can cover group weaknesses. However, when one of the struggling members of the ensemble has their turn at the solo microphone, they of course don't magically improve their vocal capabilities. Thus, this album is as inconsistent as they come. If you get Stereophony, play Share Your Love With Me to hear the group/soloist vocal divide loud and clear, whereupon the soloist (Yelena Bagdasarova) gives a 5 performance and the group more or less manages a 2. It's difficult to score, but interesting to think about: is a killer lead ever enough?

Stereophony starts out with good tunes. The opening four tracks are smooth and on par with a lot of collegiate a cappella these days with a nice mix of treats. Hot Air Balloon uses great production effects that really make the song. Can't Take My Eyes Off Of You is hip and urban thanks to Lauryn Hill, and employs one of the knock-out soloists (Cecilia Louis). Come Around is a little long, but if you trim the end you miss the vocalist charged with riffing the crap out of the number before the group goes for the pseudo-freestyle. Interestingly enough, another mega-riffer (or maybe the same one?) enhances High with her finesse. Basically, The Chorallaries are using the tools at their disposal quite nicely. So, is it enough?

Unfortunately, all sorts of problems happen with Harbor and keep cropping up for the rest of Stereophony. Really, it all comes back to soloists. With Harbor, we hear a scoopy soloist who has trouble finding the center of pitches, and the lifeless block behind her is seriously hampering the overall effect of the song. The soloist for Feel lacks grace on his low notes, which sound very forced. Love Drunk/Battlefield has another scoopy, and also flat first soloist. Additionally, Love Drunk and Battlefield are largely presented as two different songs, and should really be separate tracks. As it stands, the very weird merging and poor intonation makes it close to unlistenable, especially around the 3:43 mark when the two clashing solo voices overlap in a terrible transition. Zombie features yet another struggling soloist who can't hit her bottom notes, but has a very cool way of pronouncing repetitive "zombie". Read My Mind has yet another soloist without the necessary bottom range. What's going on here? And as previously mentioned, Yelena Bagdasarova is a total star on Share Your Love With Me. The big highs and clear lows of Stereophony are emotionally draining.

Finally, the group misses a huge opportunity with The Engineers' Drinking Song. It's a long and tired tune with sloppiness abound, but the lyrics are priceless. Example: "My parents spent a fortune sending me to MIT / although they heard it was a place of wild debauchery / but Mom and Dad can rest assured, and they should have no fears / I've never even heard of sex, cuz I'm an engineer." This is the prime time to go full balls-to-the-wall with vocal theatrics and energy because it's all so ridiculous. But, the group holds way, way back and sings it at a lullabye level. As a result, the whimsicalness of the song paired with the sleepy singers is kind of like a dirge in Smurfville. Sad to think about. Let's not. Instead, let's marvel over the fact that the arranger graduated in '83 and his work is still kickin'. That's awesome.

So, some crazy situations throughout Stereophony. The group needs to work harder at becoming a consistently engaging ensemble who is musically sound as a unit in order to back up what's happening at the lead.

These days most a cappella albums, be they high school, collegiate, or professional, meet a certain minimum standard of quality. "Do it yourself" enhancements have by and large made poor tuning a thing of the past. The growth of the home studio has taken hourly recording rates out of the picture, allowing for more time in tracking and thus higher quality vocals. It's just not that common anymore to hear an album that totally misses any of those marks. Unfortunately, Stereophony is one such album. It just doesn't meet the standard.

To be fair, it sounds as though the group made a real effort to display their best. They made a wise decision to work with the usual suspects (Bill Hare and Vocalsource), both of whom do quite a bit to add interest and cover flaws with studio wizardry. Also, Ed Boyer, in particular, concocts a neat banjo effect for the intro of Owl City's Hot Air Balloon.

Sadly, once the shine of the studio wears off, The Chorallaries' weaknesses start to show in a big way. Backing vocals are generally ok, if a little wonky in pitch. Arrangements are fine, though some feature some really obnoxious moments (the super nasal intro to Can't Take My Eyes Off Of You, and all of The Engineers' Drinking Song, which is a jumbled mess). It's the soloists that really make this album tough to listen to.

With the exception of Yelena Bagdasarova, who surprises with some good high notes and energy on Share Your Love With Me, the soloists on this album are some of the worst I've heard. I really hate to give that criticism; I'm usually very forgiving when it comes to solos because I recognize that most a cappella at the scholastic level is done by amateurs for fun. Still, when solo quality and delivery prevent me from enjoying the music, I have to mention it.

I hesitate to single people out, but in the interest of improving the next go-around, here are some of the most bothersome solo mistakes. The soloist for the Love Drunk part of Love Drunk/Battlefield is very out of tune, often due to wide vowel shaping ("I love you forev-ahhhhhhh"), and a nasal tone. The female soloist on Harbor has an incredibly wide, classical vibrato that doesn't work for the style of the song, and doesn't blend with her male counterpart. Those two also have several timing problems in which they don't hit individual words together. The Come Around soloist sounds soulless, as though he's too focused on the rhythm of his delivery. The soloist for Feel just doesn't have the high notes.

I could go on, but I think you get the idea. These are basic mistakes that groups at all levels should be able to avoid. They overshadow that which is good about the music and make it difficult to listen to.

The decent quality of the background singing makes me think that The Chorallaries are capable of better solo takes with proper coaching. I would highly recommend that they consider bringing in one of the a cappella producers they used for mixing or mastering to work with them in the studio as well. That, along with choosing a better set list to match the vocal talent available, will make a big difference in what this group is able to achieve.