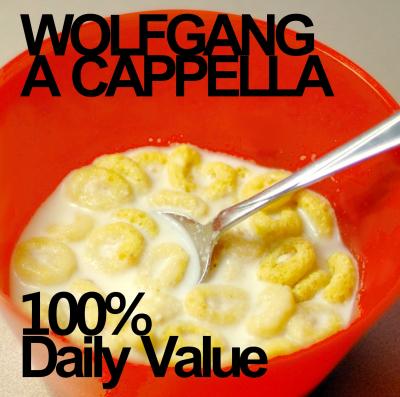 Wolfgang A Cappella, based at NC State University, comes across like a high school group: good-natured, enthusiastic and just plain happy to be here. This is a healthy way to sing. It keeps you out of the competitive rat races and hopefully away from the envious feedback loop than can envelop your college years if you're not careful. (This goes for a lot of things besides a cappella.) It also means that nobody besides your friends and relatives will ever want to buy your album.

The songs on 100% Daily Value divide pretty neatly into two groups: fun and not-so-fun. Here's the fun list: Thnks fr the mmrs, Here in Your Arms, Swing, Swing, Beautiful Day, Let Go and maybe also Your Star. Some of them are more in tune than others, some of them have fewer weak spots; all have good energy, convincing soloists and decent grooves. If you do have this disc, these are the tracks you should listen too, and I wish they were all piled up at the front of the disc in one chunk. I particularly liked the intro to Swing, Swing and the overall feel of Beautiful Day.

The other songs? Well, they are not great listens. Uptown Girl is questionable under the best of circumstances, and these are not they. In contrast, it's hard for me to begrudge these guys their St. Teresa — it's a great song, it's fun to sing, and if you're having a great time singing you might as well record. That said, this is not the version I want to listen to.

Anyway, keep singing, Wolfgang A Cappella, and keep having fun. That'll make your record fun forever, no matter what, and that's pretty cool.

The physical CD for 100% Daily Value is gorgeous, featuring a shimmering, succulent orange slice. It's art worthy of a dorm room. That's the strongest praise I can give for this album. I can also state that some of the percussionists seem to have good natural talent. And ... unfortunately, that's all for now.

Listening to 100% Daily Value is like listening to an old cassette tape that doesn't play so well anymore. It's pretty muddy and muffled. There are random loud sound bursts, like someone just manually jacked up the volume. The balance is strange. Sometimes you can hear the soloists pretty well, other times they slip away nearly completely. The background kinda comes and goes, too. There are a few names listed as producers on the insert, and there's definitely a little vocal tweaking going on, but nothing that's helping the sound. Not sure how many microphones were used to record this album, but probably not enough.

To make matters worse, some of the tuning here isn't just off, it's eye-crossingly bad. From the sounds of things, the current group needs a lot of focused rehearsal time, sectionals, and individual ear training at a piano before cutting another album. First things first: worry about the notes. Worry about your pitch. Then move on to creating better music.

Also, it would have been nice if Wolfgang A Cappella covered the basics in their liner notes. It's good and helpful to list the members who sing in your group, and the school you attend. Yeah, maybe we can guess NC State because of your name, but we shouldn't have to guess.

100% Daily Value is an album with some serious issues. There are brighter spots, but the album as a whole is not one I can recommend.

The liner notes credit production of the album to three group members and Wolfgang A Cappella with no indication of outside help. The resulting album sounds like as if it were mixed by an amateur, featuring heavy-handed production that hurts the album rather than enhancing it. There's a fade and build in St. Teresa that sounds as though the mixer simply grabbed the master fader, pulled it down, and slowly brought it back up. Here in Your Arms is a mess: background vocals that seem to be in a cave, a painfully bright lead who seems to be in a different room from the rest of the group, and a two-man percussion groove where the two men are panned hard to opposite sides of the mix. The production also generally feels like a few tricks reused repeatedly: the same background effect appears again on Your Star and on the distracting guitar riff in You Are the One.

The production does a disservice to the arrangements, which are generally lackluster to begin with. Most songs lack any sense of growth, dynamics, or variation, feeling as though they fall into a rut and stay there until the next song. For instance, You Are the One uses "do" for all of the background voices that aren't singing lyrics, St. Teresa has the men singing the same rhythm every bar for 75% of the song, and Uptown Girl compounds its lack of energy with a section in which all the backs are echoing the lead in a bored, flat manner one step above monotone. The production worsens these issues; the things that annoyed me most often seem mixed loudest.

Even when the group gets a good start, they can't sustain it. The opening of Your Star had me interested — a moody, open, bell-tone sound well suited to the mood of Evanescence — until the percussion kicked in and ruined it. And the opening track, Thnks fr the mmrs, had a neat stripped-down feeling in the beginning, but it felt tired by halfway through the song.

The singing itself is probably the strongest part of the album, but it's still not great. The backs generally hold together, and most of the solos have voices that are appropriate to the songs they're singing. But there are numerous pitch problems and many of the leads are either straining or failing to emote at all. For instance, there is a kind of terrible irony in hearing the soloist on Unwritten sing "Reaching / for something in the distance / so close you can almost taste it" as she's giving her all but straining to hit the line. In contrast, the lead on Swing, Swing is basically talking his way through a solo that should have at least some edge to it if connecting to the lyrics at all. There are signs of light in this category, at least: the soloist on Beautiful Day, while a bit stilted, delivers his lines solidly and with a reasonable amount of energy, if not the explosiveness I would have liked to hear.

The bottom line is that Wolfgang A Cappella is singing a bunch of artists and songs I've heard covered before (U2, Evanescence, Billy Joel, Paramore, and of course Frou Frou's Let Go). And while they're performed mostly competently, there is nothing that this group adds to any of the tracks that makes me want to hear their take on these songs again, in spite of the flaws.