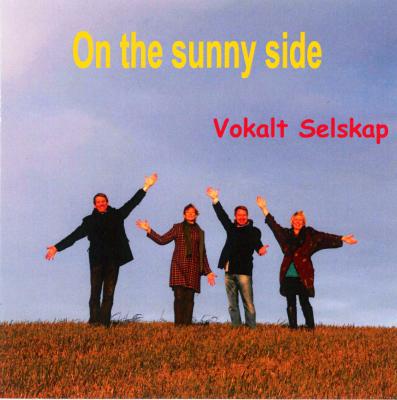 On the Sunny Side is the new album from Vokalt Selskap, a Norwegian jazz quartet, though there are often more than four voices at work. Two guest vocalists appear and five of the twelve tracks have significant piano accompaniment; this is more of a vocal jazz album than a strictly a cappella one. Also, at 36 minutes, it feels a bit short, despite containing twelve tracks.

The album is reasonably sung on the whole, with little apparent production. There are breath sounds and the occasional rough cutoff, leaving songs feeling fairly raw. The biggest production issue appears on Monicas vals, where the lead female vocal sounds like she's singing in a different room from the rest of the group. There are also points in multiple tracks where the panning makes the tenor stick out of the mix, particularly A Nightingale Sang in Berkeley Square.

The arrangement credits include the likes of Phil Mattson, Steve Zegree, and Gene Puerling, so you know they're solid, but the performances do not always live up to the potential of those arrangements. The album, in general, lacks the punch and tightness that I think marks the best jazz. Cutoffs are not always in sync, and I often had the impression that the singers were singing the lyrics as syllables for the notes rather than as words conveying a message. These issues are further compounded by moments of strange enunciation, both on lyrics and on some of the scatting (Autumn Leaves). Several of the songs which should feel fun and spontaneous instead come off as overly formal and rehearsed, doing a severe disservice to upbeat numbers like Accentuate the Positive and Mack the Knife.

A cappella i Acapulco, in particular, is a song that's supposed to be fun with a bit of Latin groove, and I never felt that Vokalt Selskap's version found that groove. The percussion break, when it comes, feels out of left field and strangely distancing because it doesn't feel like it comes from anywhere. Most of the percussion on the rest of the song is stripped out, making that section even more incongruous. Overall, the track feels much more like a collection of parts than a cohesive whole.

There were many things that bothered me, but On the sunny side does have positives. The high point of the album was Seterjentens søndag, with Vokalt Selskap working in their native idiom and showing their range. Soprano Idun Thorvaldsen's arrangement moves between a slow contemplative mode and a jazzy, upbeat feel. At turns, it is touching, joyful, and sultry. The scat interlude is handled well by all four voices, missing the awkwardness that marks a similar section in Autumn leaves. Indeed, I found myself connecting more to the nonsense syllables here than I did to the words on some of the other tracks. The promise shown by Seterjentens søndag indicates that the ingredients for a better album are there but need to be tapped more consistently for Vokalt Selskap to accomplish the sound they seem to be going for.

On the Sunny Side is a confusing trip through the musical minds of Vokalt Selskap. After listening through the album, I am left with disappointment stemming from high expectations. Between the multitude of famous and famously-sourced arrangements (Gene Puerling, The Real Group), the guest musicians, and the ambitious track list, I was hoping the goofy album artwork would belie the musical complexity of the disc inside.

Unfortunately, the Comic Sans-sporting disc art was a pretty decent preview of what I was going to hear. Of the twelve tracks on On the Sunny Side, five include piano accompaniment and three others include guest musicians. The vocal arrangements don't carry themselves on the tracks with piano; they're often just melodies in unison or octave, with the occasional harmonized chord. Had they not been in tune with the accompaniment, I would have scored all of these tracks with a "1".

Salseo epitomizes the unsettling feel of the album. It's so confusing that I literally can't think of a way to describe it other than to transcribe it in words. It begins with the bass arpeggiating a chord and ending phrases on a pitchless "ki tigh tigh," followed by some entering "kloot kloot"s from a higher voice, along with other nonsense syllables in a strange cacophony of sounds, until we hit a cadence and move into vocal jazz of ambiguous tempo. It was off-putting, and I didn't like it.

There's a tremendous quality difference between the first half of the album and the second. A cappella i Acapulco has a similar feel to Salseo but could have easily replaced it both as an opener and for inclusion on the album at all. It and the preceding track, Seterjentens søndag, are the best tuned and most stylistically unified of the tracks and sound the most rehearsed.

I cannot with much gusto recommend buying this album. On the Sunny Side was clearly recorded in single takes with very little editing and, for an album like that, it's pretty good. Unfortunately, that production aesthetic almost automatically puts the album years behind the curve and on my bottom shelf.

In addition to the four members that make up Vokalt Selskap, they call upon others to help them out for a few tracks—an extra tenor here, an extra alto there, and a…piano? Due to the fact that five out of the twelve tracks have a piano in it, I wouldn’t exactly consider this an a cappella album, my biggest issue with On the Sunny Side.

Looking beyond that fact, the album carries little energy, poor production, and below-average singing. In those tracks that actually were a cappella, I was hoping for the creativity that most jazz groups infuse into their arrangements. More often than not, their arrangements had a very basic chord structure that I wouldn’t expect to hear from a jazz group. In A Nightingale Sang in Berkeley Square the arrangement is only three parts, sometimes going down to only two. The beauty in recorded a cappella is that you can make everything more complicated than you can live. Why not take advantage of the glorious technology that is recording?

Vokalt Selskap’s take on the classic Smile is the best arrangement on the album, consisting of those beautiful chords you want to hear from a jazz group, but they’re only beautiful on paper. And I say this not because the notes aren’t sung correctly, they’re just not engaging. The execution of this, and many, tracks is sub-par at the best. Perhaps with a little more confidence and “umph” from the singers, this could have been a different album.

While the singing on the album may be accurate, it is far from entertaining. I would consider (the aca-tracks on) On the Sunny Side a more natural approach to recorded a cappella, but just because it’s natural it doesn’t have to be boring, does it? I found myself struggling to get through the thirty-six minute album. My yawning began to increase significantly throughout the last track, Brahms’ Lullaby. I suppose it was a rather fitting ending to a rather lack-luster album.

To order this album, visit CDBaby.com or Platekompaniet. Downloads are available via iTunes, Amazon and Napster.