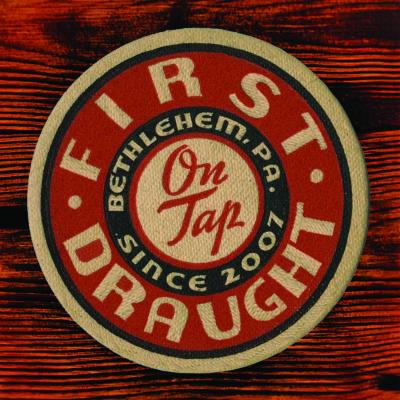 On Tap is a male quartet of twenty-somethings with a barbershop slant. Their final product looks professional, but their music needs a lot of work.

Intonation is the biggest problem on First Draught, On Tap's debut album. Some groups end up flat by the end of a song, or have problems with key changes. But On Tap struggles to stay on pitch from the gate, even with straightforward chords in well-known tunes. Furthering this fundamental problem is a seeming lack of confidence, as evidence by frequent warbly tones and passive singing. When there's only four of you, each of you'd better own your part or boy, it's really evident who needs help. The slower songs on First Draught that demand precision really expose these weaknesses, like Surfer Girl and When She Loved Me. Not that the uptempo pieces conceal musician issues; Runaround Sue's tempo is so out of control that it's hard to evaluate what the heck is going on.

Production isn't up to current a cappella standards, and sounds homemade even with an outside-of-the-group producer/engineer listed. At least the microphones sound like they're pretty decent. Obviously many problems would have been fixed or minimized with better studio treatment. Was there even a click track used for First Draught?

If there's a bright spot here, it comes from frequent lead John Rodgers. His lovely tenor voice has a lot of passion behind it, and the kind of sparkle that gives songs character. Without him, there wouldn't be much left to care about: in addition to the poor tuning, the arrangements aren't anything special and the track list has a lot of songs you'd expect from a barbershop quartet.

Being more critical in rehearsals and hiring a seasoned a cappella producer will surely help On Tap catch up to their peers. Until then, we'll have to wait it out.

It's not often that I have to force myself through a listening experience. On Tap's First Draught is a quaff that I had to steel my stomach for. I was hoping to be pleasantly surprised, to see a four-man collegiate quartet with a very eclectic track list come out and own their size and blow me away. This did not happen.

While On Tap professes to be a contemporary a cappella quartet, this is only partially true. Their album opens with a decent if underwhelming barbershop-style rendition of Surfer Girl, which sets a strange tone for the rest of the album. With few exceptions, the album bounces back and forth between old standards and contemporary music, never quite hitting the mark on either.

They're clearly not a barbershop group. None of their chords "ring", and their blend is often bad and occasionally nonexistent. When She Loved Me is the best of the barbershop tunes, and an exception. Their unisons blend nicely, and everything else goes pretty well too. There are some tough chords that are pulled off nicely. Lullaby (Goodnight, My Angel) also has an interesting arrangement, though it doesn't exactly break new ground.

Their contemporary tunes often lack groove or feel, and are rescued only by the appearance of John Rodgers on lead, who is usually the only thing that makes those tracks listenable. His take on Come On Over Baby (All I Want Is You) is actually one of the sickest solos I've heard in a while, made all the more impressive by the fact that he replicates most of Christina's runs exactly and relatively flawlessly.

Everything about First Draught's production aesthetic says "behind the curve". The album is almost exclusively live single takes, with some (often awkward) overdubbing thrown in. The engineering is incredibly subpar, at times bordering on unlistenable. Pops, clicks, obvious crossfades, and bad comps appear on a majority of the tracks on the sixteen-song album. Reverbs sound boxy or metallic and are often heavily applied to the point of distraction, and solos on some songs have EQ treatments that are physically painful (I'm Yours).

On Tap has potential. If they decide to be a barbershop group, they sound like they could have the chops to pull it off. Or, they could decide to be a contemporary quartet and hone their sound toward that goal. As it stands, they've planted themselves firmly in the middle, and the results are unfortunately not compelling.

The gentlemen of On Tap have released an album that is a little less than satisfying. It has its few good moments, but more often than not it is barely meeting average. There are a few too many tracks on First Draught, all of which are significantly under-produced. While none of the tracks got the attention they deserved, there was a lone one that stood out as "good".

My main issue with a majority of the tracks is that they simply are not polished enough to be released on an album, much less an album to be submitted for review. Come On Over Baby (All I Want Is You) has a few tuning issues throughout the whole song, and is not the only one to have that problem. This track also featured some less than stellar percussion. While I appreciate the fact that this barbershop group is trying to branch out from their traditional genre, I wouldn't recommend trying to do so with some not-so-great wannabe beatboxing to any group out there.

Tuning issues aside, the energy level in this album (with a few exceptions) is impressively low. This could be attributed to many different things, but the largest factors have to be the low production value and the less than average arrangements. As a singer, I find it hard to hear these arrangements and think how fun they would be to sing.

I do have to give it to these guys that every once in awhile, a decent track rolls around. The classic barbershop tracks, like The Longest Time, seem right up their alley; the energy is there, the solo isn't half bad, and the arrangement fits. While I really can't give this track a thumbs up due to the production value, I certainly feel confident in giving it an "average".

There's one track on First Draught that actually stands out as good. Lullabye (Goodnight, My Angel), arranged by On Tap's bass, Chase Philpotts, is actually okay. The production is still bad, but the arrangement is likely the best on the album. Unfortunately, it's the only one with Philpotts' name on it. There is a good bit of emotion portrayed in this rendition of Billy Joel's tune, perhaps even some vulnerability, not to mention a hint of musicality, something I had been searching for so hard in the rest of First Draught.

Lullaby (Goodnight, My Angel) gave me hope for this group — something is telling me that with significantly better production these guys could churn out a decent album next time. Drop the percussion all around, dedicate more funds towards production, and encourage Philpotts to arrange a few more tracks. That's my recipe for success for On Tap's next album attempt.