Best Understood by Children and Animals (2010) 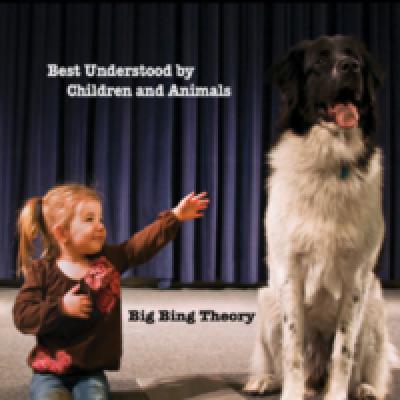 Best Understood by Children and Animals also works for nostalgic grownups. The best songs have a winsome appeal, like Michael Collings singing on Britain's Got Talent. Youth, romanticism, and decent production values are hard to resist.

Take Cheyenne Brand singing Tom Petty here with the Big Bing Theory. It's not perfect, it's not fantastically polished or even terribly stubborn. It is, however, utterly charming. William Deresiewicz recently pegged affability as the central tenet of today's entrepreneurial hipster ethos. Smile authentically, don't stint on the elbow grease and see how far you can go. Certainly it's working for this group.

Big Bing's elbow grease is getting results — this recording is logarithmically better than earlier efforts. Looks like the group raised the money to hire Bill Hare, then put in enough rehearsal time to make the investment worthwhile. The dance tunes show the partnership at its best. Hot 'N Cold is smooth and bouncy, and Harder, Better, Faster, Stronger bops its way to success.

Even the technically weaker numbers retain their charm. Beautiful Day has a lot less going for it than a dozen other a cappella covers of U2's latter day hit. Still, the version here doesn't halt the disc in its tracks — within its limitations, it stays likeable, just like most everything else on the disc. The group mostly keeps it light and friendly, retreating into sincerity only toward the end. Circle of Life is 100 percent irony free, a devotional tribute that gives Simba and Co. the same canonical treatment as a Sondheim or Rogers & Hammerstein revue. It's achingly sincere — and actually quite well done, especially if you meet it where it is.

I don't know what to say about the last two tracks. The Medley is too much, too many, unless maybe you're entering a song-a-thon hosted by Dick Clark or the Smothers Brothers. Naturally, meanwhile, is another throwback, a 90s a cappella staple that I hadn't heard in ages — but with, inevitably, a catch. The production values may have reached the 21st century, but not so the performance cred. The song ends with a slate of (nicely sung) tags interspersed with wretchedly trite narration in true 90s hidden-track style. Those scripted studio chatter bits were tacky then and the form hasn't magically improved since its heyday. Still, if you're selling nostalgia, at least you have tradition at your side.

Best Understood by Children and Animals is in many ways, quite consistent. We hear generally steady vocals, production, and soloists, all of which bob along without many dips in output. But, the whole group is also consistently too timid in its performance, which results in an album that is quite boring. One track blends into the next, with sugary sweet, shy voices carefully hitting their notes and swimming around in their comfort zones. It's time to take off the floaties and run straight into the deep end, Big Bing Theory.

The background singers evoke a lot of imagery on Best Understood by Children and Animals. Think pretty, soft-spoken fairies flitting around, or perhaps a line of lithe ballerinas gently twirling. I hate to say it, but the vocal immaturity here is more on the high school level than the collegiate level. The group's tuning is better than the average high school group, but the tiny sound and gentle approach sounds very Junior Prom. The only time we hear spunk is on Sweet Dreams, which has some genuine compelling drama. Thank goodness for a mid-album shot of variance or it'd be hard to stick with this release.

There's nothing fundamentally wrong with a smaller sound, but the material should be suited for what you've got to work with. This isn't a group that can successfully cover a Daft Punk/Kanye West combo at this particular juncture with these particular members. Shoot, even Tom Petty is a stretch. Circle of Life is actually a good choice for the group's style (usually the Disney/Broadway stuff has no business being on collegiate albums), but the corniness of Mufasa's speech is just too much. Much too much. The Medley fits in this Too Much category as well, featuring fragments from at least twenty songs. (Not a typo.) Just because one can do something, should one? It sounds like BBT could benefit from more outside feedback pre-recording instead of post-recording.

BBT is probably a group that'd do well exploring less mainstream pop songs. We hear musicality on Best Understood by Children and Animals, but the bulk of the songs present just don't seem suited for the singers' light touch.

On the Big Bing Theory's latest album, Best Understood by Children and Animals, it sounds like the group is too busy concentrating on what the parts are and diction instead of just singing. This applies to solos and backing parts, and to every track without exception. Nothing is out of tune and nothing is bad, but the state of collegiate and basically all recorded a cappella these days is such that if you're in time and on pitch, you've only won about 10% of the battle.

Bill Hare's perennially excellent mixing makes Big Bing Theory's album listenable and aurally pleasant, but there isn't a plugin or piece of gear in the world that can fake emotion (yet). Beautiful Day and Circle of Life are the two tracks with the best and most cohesive ambience on the album. I'd include Mack the Knife in this category without the "best": the ambience is appropriately old-timey, but the soloist's performance is histrionic and unappealing.

The rest of the album follows a similar vein: not bad but not particularly good either. Most of the time, I found myself thinking, "do they have any idea what they're singing?" Circle of Life is one of the worst offenders, where I can hear every single syllable pronounced, but it just sounds like gibberish. I don't mean to say that groups shouldn't sing in foreign languages; like almost every other former high school choir member my age, I sang Circle of Life and One By One and I know what the lyrics mean. It sounds like Big Bing Theory was more concerned with enunciating all the syllables of "sithi uhm ingonyama" than telling the listener "Yes! It's a Lion!"

I don't know how to adequately describe my feelings toward The Medley. Suffice it to say it is the weakest track on the album, and it is not sung any less engagingly than any other track on the album, and I decided to score it a '1'. There are at least fifteen different songs all based on the same chord progression, with little else stringing them together. It's basically Steven Lynch's musical comedy routine without any humor or any explanation, and it falls flat.

I tuned this album out as I was listening to it, and found myself having to jump backwards and listen to sections and even entire tracks over again because I wasn't paying attention the first time around. Best Understood by Children and Animals would make excellent driving music, and is fine for easy listening. If you're looking to be impressed, enamored, excited, or otherwise engaged, you may want to look elsewhere.