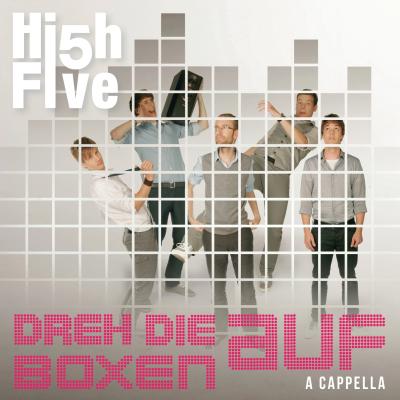 Most of RARB's readers don't speak German. If that describes you, then this is a release to pass on. This isn't a warning that accompanies all German albums. But here, the singing is so obviously focused on storytelling — mostly humorous — in German (with one unfortunate exception: Fix You). Without the language skills to understand the German stories, the songs are pleasant but pointless. The cleverness is lost.

On the other hand, if you're looking for a reason to study German, you could do worse than by starting here.

If you plan on picking up just one track, try Gisela, ich mag dich. While the story would definitely enhance the song, the beat and overall energy are just fun enough for the ignorant monoglots to enjoy.

Dreh die Boxen auf must be judged against the standards it sets for itself and its scores reflect that. But while the scores may be accurate, this isn't a release that crosses borders. German fans will surely enjoy it. The rest of the world is left to hope that these talented gentlemen one day grace the rest of us with an English release.

When it comes to non-English-language a cappella, there has to be something besides the lyrics to grab the attention of an English-only listener. Crazy vocal gymnastics, impossibly high solo lines, revelatory arrangements and cool studio wizardry are the hallmarks of world-renowned European ensembles like Rajaton, basix and the Real Group. So what about High Five, a quintet of relative newcomers from Germany? Dreh die Boxen auf, the group's second studio album, has none of these trappings, and as a result there isn't much here to love.

Unless, of course, you happen to be fluent in German. As a listener, I am far more likely to latch onto the music than the lyrics when hearing a new song for the first time. Yet whether it's the harshness of the language to Anglophone ears or the soloists being so far forward in the mix, it is nearly impossible to ignore the lyrics to these songs, so off to Google Translate I went. From what I can gather, High Five is meant to be a comedy group à la Da Vinci's Notebook, and even in translation a few of these songs are at least worth a chuckle or two. Shoppen ("Shopping") is about how the lead singer's girlfriend can't stop spending his money on high fashion clothes, so he suggests spending the day knitting together. Ich warte auf den Tag ("I'm Waiting for the Day") is about a longing to live in the '60s, complete with liberal name-checking (Flower Power! Jimi Hendrix! Jesus sandals!). Fünf Minuten ("Five Minutes") begins as a sweet break-up ballad, then quickly changes tone as we find out it was about speed dating all along.

There's not much going on in the music, which is surprising for an album whose title translates roughly to "turn the speakers up". Most of the songs were written and arranged by band members Sebastian Hug, Hannes Herrmann, and Ulrich Stoll in various combinations, and they range in style from boy-band pop at the beginning of the album to metal at the end. The better tracks are pleasant and forgettable; the worst of the bunch are downright creepy. The soloists aren't outstanding, the arrangements are all straightforward, and the vocals and vocal percussion sound refreshingly unproduced for the most part.

In short, it's about what you would expect from a small collegiate ensemble, which is more or less what these guys are. The members of High Five don't specify their ages on their website, but they sing about feeling old at twenty, and they don't look or sound much older than Justin Beiber. Even so, there are whispers of a more mature group here, as in the sophisticated, jazzy bridge of Jeden deiner Wuensche ("Each of your Wishes") and the majority of Pech und Schwefel ("Fire and Brimstone"). This latter track is the fullest sounding on the whole album, and is one of the few that I would listen to again. But it's just not enough for me. The bizarre inclusion of Fix You notwithstanding, Dreh die Boxen auf does not seem destined for an international audience.

High Five is a delight to encounter, a shiny happy package of songs and energy that is a pleasant antidote to any American angst that ails you. The group has assembled a 15-song package of mostly original music that is consistently well performed and also shows a fair bit of musical range. The music (not speaking German, I won't claim to have studied up on the words) is a mix of pop, rock, and novelty. The singing is smooth. And it's nice to listen to a small a cappella rock group for a change instead of a big collegiate muddle.

Dreh die Boxen auf is the perfect pop song, smartly placed at the top of the set. It's somehow shinier, poppier and bouncier than everything that follows. I think it synthesizes most of what High Five was going for, and the group should be proud of it. Elsewhere, the songs have less hook but still are pretty decent. Midpack, Gisela, ich mag dich is catchy in an attention-getting way, possibly because it's apparently German words set to a tune by the Danish pop star Ida Corr. The song sounds a bit like R.E.M.'s Stand and is followed by the pleasantly downtempo Fünf Minuten. As a back-to-back pair, they show the group's range and willingness to reach out.

My favorite tracks are the ones where everything goes off the rails. Kukident is bizarre and oddly compelling. I'm not sure I like it — but it's different, and it sounds great. Likewise, metalesque Die Acappellypse is a lot of fun and shows that these guys are at least partially in on the unaccompanied joke. A lot of the European vocal pop groups shy away from anything vaguely resembling irony. This Teutonic industrial track is just what you've always wanted from Germany (where "apocalypse" rhymes with "callypso"! so cute) or maybe I'm just speaking for me.

Anyway. This is a fun group and they made a fun disc. Worth a high five? Why not.