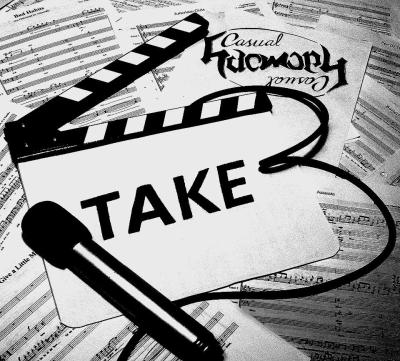 Take III is extremely full and flashy. But in an unusual move for collegiate a cappella, there are basically only two genres performed here, though they're hard to concretely name: a kind of jazzy R&B, and more-or-less rock opera. Since there are (basically) two approaches, I don't think it would have hurt to structure Take III into Part I (the jazzy R&B pieces), and Part II (ending with the rock-opera headbangers) to keep us in the flow, but I'm a little late with this suggestion. At any rate, the overall sound is tighter than the usual hodgepodge of collegiate albums and that's appreciated. So let's get on with the show.

The soloists on Take III are deliciously melodramatic. I'm picturing the leads recording their tracks on their knees, delivering pleading, soulful deliveries in the studio, bathed in moonlight. (Melodramatic, remember?) There's a metal rocker (Ryan Aiello) singing the sh — out of Eleanor Rigby. The intense emotion from Oklys Pimental in Assassin is spine-cracking. The many special touches and turns of vocal flair Christofer Peckhardt puts into American Girls is needed and appreciated; even the way he carries the notes across the bar from verses into the chorus is awesome — if only all collegiate singers had such control of their instruments. Then there's the infectious sass and command the soloists exhibit on the final two tracks; more of a funky slant for Peckhardt on Give a Little More, and a total show-off party for 25 or 6 to 4 (hey man, if you've got it, and Daniel Braff has it...). Also, falsetto singing is well-loved with these guys, but never squeaky, never strained, just hot, which you can hear oh-so-well on Bad Habits (way to be a master seducer, J. Aaron Boykin). Making the soloists all the better? An energetic, in-tune block that really pumps everything up. I will caution, however, that this group is so very energetic that it might be dipping toes into the overly aggressive category.

"Busyness" was a complaint for Casual Harmony's prior release. Arrangements are certainly dense here, and occasionally too packed. It's hard, for example, to get into the groove/feel the beat of Shake Me Like a Monkey because it's so cramped. But mostly it's great having so many elements to discover on repeat listens.

Honestly, it's hard not to give a "5" to a group that's in tune, has killer soloists, nice production, and fantastic energy. But here's the rub: I don't think there's quite enough vocal contrast from track to track, either in the lead deliveries or the arrangements. Be it for better or worse, iTunes decided to nestle Take III right before my collection of Clef Hangers albums, so each time Take III ends, the Clef Hangers start. And since we compare albums to the general body of a cappella music at RARB, there's my excuse. For Casual Harmony, there's a lot more to explore than just being really good at being really loud, though it's certainly fun to rock to.

I certainly enjoy Take III and imagine you will, too. Nice job all around!

Casual Harmony is back—this time with a little more cool to complement the group's signature energy! The group's previous release was an explosion of Pop Rock and Hip-Hop; a parade of crowd pleasing (if overdone) tunes which you couldn't help but be a little charmed by. Well, the frat boy charm is still there, but the boys seem to have grown up a little.  Now, armed with tunes like Butterfly, Fantasy, Assassin, You And I, and Give a Little More, they're trying to seduce as well as rock out. It's a nice development, even if the new direction isn't always perfectly complemented by the arranging style/solo delivery.

Let's look at arranging first, since it's probably the single most obvious place where the group's choices betray the aesthetic of the songs chosen. This album excels in places where the vocals have been studio-modified into timbres that are really unique and memorable. These moments almost exclusively happen when the syllables in the raw arrangement are simple, and the focus is more on the tone of the vocals, as opposed to the moments when they become too active and stand out as nonsense syllables.

Example of a good moment: the intro to Assassin kicks off with a nice treatment of "doo", such that it gives a similar impression as the marimba part in the original. Example of an awkward moment: at the 2:00 mark of Eleanor Rigby, there's a part where the levels of distortion suddenly peel away to expose the group chanting "jot jot jot jot jah jah jah jah jah jah jot". The hyperactivity of this series of syllables sounds forced, and it totally breaks the mood of the song.

Syllables aside, another arranging factor worthy of note here is that some of these songs are just too darn long! Out of eleven tracks, only four come in under four minutes long. The result is that some otherwise enjoyable tracks become stale before the end. Arrangers — tighten up your tunes! Take out unnecessary repetitions, intro repeats, outtro measures—whatever you have to do to present the absolute best of each song.

Arranging aside, when you're tackling a list of sensual songs, each track lives and dies by the soloist. The good news is that Casual Harmony has a stable of great leads to pull from, and everything works more often than not. Butterfly, Bad Habits, and Give a Little More in particular benefit from very strong lead vocals. Other tracks like 25 or 6 to 4 have strong leads that go a little over the top at times. Only Fantasy with its shaky falsetto, and Shake Me Like a Monkey with its karaoke snarl come up short. Everything else is varying degrees of good and great.

It's nice to see Casual Harmony branch out into some new territory with this album. My only advice is for the arrangers: just calm down a little bit with the overactive syllables and let the vocals/studio production create the mood and texture.  Choose vocal sounds that aren't so distracting and instead focus on singing them with the right timbre to match the style and support the soloist. There's clearly solo talent in your ranks, just get the arrangements out of the way and let your leads shine!

Take III has some seriously good tracks. Assassin is the best track and features a brilliant arrangement. American Girls is infectious and has me grinning from start to finish. And Daniel Braff's lead on 25 or 6 to 4 is spectacular. But most of the songs and arrangements have no ambition—they are content to be no more and no less than really well sung recreations of the original songs, right down to every guitar lick and drum fill, and often even the sound of the original artist.

The anomaly is You and I, which seems to be outside the group's comfort zone. The album mostly consists of up-tempo R&B songs and this ballad, while it is Stevie Wonder, is choral. The arrangement is rather homogeneous, which is not a strong choice for a ballad with a low-energy lead. I was shocked when the soloist finally came alive and delivered an impressive and nuanced ending. Where was this passion for the first three-and-a-half minutes? The song could have been great by either cutting the middle two minutes or evolving the arrangement and the soloist's delivery as the song progresses.

The album ends on an odd note with the original ending of 25 or 6 to 4. There's nothing "wrong" about it, but it's not the best way to end an album. I was left feeling unsettled and unsatisfied, which is a shame for an album with so many high points.

So if you've been looking for good a cappella covers of any of these songs, look no further. And if you're looking for a creative and exciting new arrangement, check out Assassin.

Visit www.casualharmony.com for details on how to get your copy today!