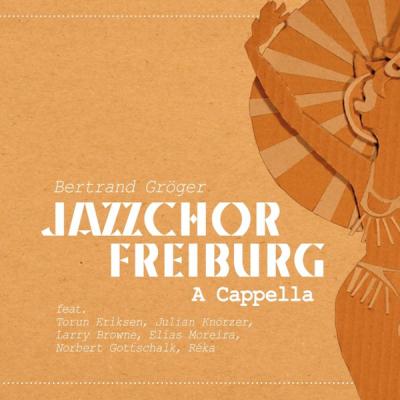 Jazzchor Freiburg faces the daunting task of making something new out of a genre that, by its nature, has a sound that is frozen in time. It's hard to make a high-quality record without sounding like a Manhattan Transfer/New York Voices tribute band — a feat that's difficult on its own and wonderful to encounter live, yet not enough to satisfy. It's hard to bring this music out of the museum and find ways to engage.

A Cappella mostly succeeds. Strong voices, good arrangements, and well-selected ringer soloists make the album technically proficient. From there, it's a matter of taste. RARB's rating system won't do you much good here — I decided pretty quickly to rate all the songs on skill, which is a lot higher than average and hence excellent if not as uniform as the numbers suggest — and sort out what I liked in my review text.

Torun Eriksen's performance of her own composition In Person may be my favorite track on this album. Her voice is soft and compelling. She's a Norwegian pro, not a member of the choir — this album may be as much a guide to the working jazz musicians of Europe as much as a collection of songs — and she sounds fabulous. I also very much enjoyed American-turned-continental Larry Browne's turn on Cute. It sounds almost more Jon Hendricks than Shiny Stockings, the actual Hendricks song here, ably performed with scat solo by guest vocalist Norbert Gottschalk.

The group sounds pretty good without the ringers, too. Percussionist Julian Knörzer has a deft touch anchoring many of the tracks with the right level of sound and color, and the singers hold up as well. In general, the group navigates the range of sounds required to sing chorally and in a jazz style at the same time, from the purely pretty to the grating and all the noises in between. I don't love A May Song, a composition by Jazzchor Freiburg's director Bertrand Gröger, but I like the thought that went into it, the effort to push the envelope. Likewise, his African Call is gutsy as hell. It sounds like a pastiche from somewhere on the The Lion King-Talisman continuum, but it is apparently an original composition and a very appealing one that Gröger used to coax his choir into a top-tier performance.

There's a bit of hoary chestnut syndrome here, but I suspect it will only affect vocal jazz afficionados like me who are simultaneously inclined to give a group the benefit of the doubt. I don't personally need to hear another round of Kirby Shaw's A Cappella or any kind of Beatles tune, nor do I have demand for Happy Birthday. But I bet all three go over well with the casual crowds. Likewise, the Latin touch tunes aren't unique to this group but still offer a lot. La Muerte del Angel is the most classical performance and comes across quite successfully. And they got a great arrangement from Roger Treece with Magalenha, brought to life by guest soloist Elias Moreira. I'll always be partial to Sergio Mendes, myself, but the Jazzchor version is pretty darn good.

Jazzchor Freiburg is at its heart a jazz choir, so if that sound doesn't appeal to you this disc won't win you over. But if you know that and want to hear more, this release offers a lot to appreciate and enjoy.

Jazzchor Freiburg's release confuses me. The group's name sounds German. The group's jazz choral ensemble feels Scandinavian. The album's music selection dances all over the map from Norway to Brazil to the heart of Africa to Kirby Shaw's platonic land of a cappella. The album is full of creative ideas, but for me, such a scattered mix of modern choral jazz with warmer African-inspired and Brazilian choral music is perhaps more of a soundscape than an album.

Jazzchor Freiburg deserves credit for pushing boundaries. The album feels like an experiment, a stretch for the group, or perhaps a well-developed sketchpad of directions the conductor Bertrand Gröger is considering. Some of these experiments are quite successful.

In Person features the song's writer, Norwegian jazz singer Torun Eriksen, as its soloist. Her alto voice is entrancing, with a flat, breathy tone that is expressive in her mid-range, bell-like at the top, warm and fertile down low. Her performance and moody, introspective lyrics captured me as much as her distinctive voice, yet the song is dragged down by the background singers in the bridge, which feel formless and vague.

Magalenha is both impressive and a bit boring. The Brazilian song features that sort of gospel dissonant chord structure that makes them sound shouty at any volume. The song production includes a very deep bass line in sections and traditional drums that are nicely executed. But the song, though textured, takes me nowhere.

A May Song was composed by Gröger, perhaps revealing his roots in modern ensemble music. It's atmospheric with group-wide breaths and quiet, human-sounding vp that serves more as background noise than driving any beat. Singers belt out a series of deliberately harsh dipthongs, then recess into a space of steamy, gassy breaths over a heartbeat kick drum. It's more soundscape than song, but it's intriguing.

Happy Birthday, yes, that Happy Birthday, is a jazz take on the traditional tune — with some kind of Afro-jazz fusion feel added later in the song for good measure. Few would consider this interpretation, but I'd argue that there is a reason no one has attempted an Afro-jazz rendition of Happy Birthday. Is it different? Sure. Was it necessary? Nah.

The thread that ties these arctically cool jazz pieces with more equatorial flavors is Jazzchor Freiburg's large ensemble approach to choral jazz. The songs bear little relation to each other but for their instrumentation — many jazz vocalists. The chorus's dedicated conductor controls the performances well. Entrances and cut-offs are clean and the timing is smooth. The group remembers dynamics, a rare trait in today's studio a cappella world, controlling builds so that quiet moments carry weight. While Gröger maintains the group's accuracy and precision, he's unable to enforce blend within specific voice parts. Higher voices of both genders clash occasionally, poking out of the blend in certain songs. For a group that has mastered difficult jazz chord pitches and chord progressions, to neglect blend is disappointing.

I am turned off by the clashes — of a cappella oldies (A Cappella, Shiny Stockings, Cute), ensemble jazz (Not Like This, Good Night), and African or Brazilian (Magalehna, African Call, Happy Birthday, La Muerte del Angel).

The strength of Jazzchor Freiburg is creative ideas arranged well. While the puzzling mix of songs feels gratuitous, it shows a breadth of ability that interests me for the group's next project; I'll hope for a more focused, fully-developed album.

Ah, Freiburg, Germany — I love this city! I actually lived there for a few months back in early 1991 while I was serving as a Mormon missionary. This Jazzchor (jazz choir) was founded the previous year, 1990, and although I never ran across them while I was there, I was quite excited to be assigned this album to review. The group's website added fuel to the fire of my excitement, displaying quotes from reviewers such as "A firework of rhythm" and "The most progressive voice in German choirs". The site also states that the group won first prize at the German Choir Competition in 1998 and the Choir Olympics in Korea in 2002 and has collaborated with Bobby McFerrin, and the Swingle Singers among others. Unfortunately, A Cappella didn't meet my expectations and didn't really even come close.

First the good things, though. The choir is quite large (that's not the good thing; bear with me). While I can't tell exactly how many singers there are, let's call it 23 — 34 (the smallest group photo on their website shows 23 singers, but there are 34 singers listed on the website by section). For such a large a cappella group, they do some things amazingly well. The cut-offs are spot on. The intonation is great. The balance between parts is also quite good, although there are a few times when the female-heavy nature of the choir shows through. I would be proud to sing in a choir that is as technically proficient as the Freiburg Jazzchor.

Now for some of my complaints. First, the music presented on this album seems, well, easy. Just about all of the pieces use simple four-part SATB harmony. Why use just four parts when you have so many singers? And the harmonies are not especially impressive or difficult, even on the jazz numbers. Nothing at all made me say, "Wow, that was cool!" It seems to me that the conductor's strategy was to pick pieces that could be learned in a single sitting, then practice, practice, practice, until every last "bug" in the performance was ironed out. For some reason, this really rubs me the wrong way.

One of my other complaints is that the music lacks artistry, meaning that it doesn't touch me emotionally. That's perhaps largely a result of the size of the choir, combined with the simple arrangements they used. As mentioned, few of the pieces depart from four-part SATB. Nearly all of the time when they do, however, I like them. For example, A May Song is a song without words which features sections doing vocal percussion together, and making interesting sounds such as "doom" and "shah". I quite like it. But sadly most of the notes I took while listening to the album say things like this: "bass soloist scat is pretty good, but song doesn't speak to me" (Cute), "very slow and uninteresting for the most part" (La Muerte del Angel), and "Why is this on the album? Seems quite odd. I don't like the arrangement" (Happy Birthday). And another, more minor issue, I'll mention that the background talking and cheering in the first two songs is distracting and inappropriate.

This album is available on iTunes and at Acappellazone.