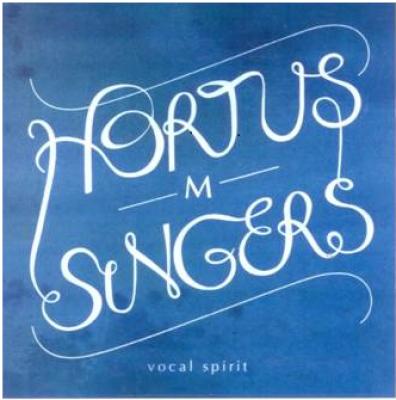 Vocal Spirit is a brave album from Hungary's Hortus M. Singers, a vanguard of contemporary classical composition. Bass Imre Bogár wrote all of the music he presents here, and he's got some really interesting ideas. Like a lot of interesting new music, it's not always easy on the ears — and like a lot of interesting new music, sometimes the concept gets out ahead of the singers. I view this album as an excellent demo of what Bogár's work sounds like and a worthy showcase performance.

Wandering is the best song and nicest performance on the album. It has a lovely wordless theme with echoes of Annie's Lament and features a gorgeous duet between two of the women's voices. Like all the tracks, it's sung by a quartet of professional-caliber singers, three women and Mr. Bogár. The composition is beautiful and would translate just as well to two voices with instrumental backup (piano and bass?), or even a wind quartet or accompanied duet. Gossamer tries for a similar effect and isn't quite as successful. Overture has shades of David Wright's barbershop Gershwin arrangements for Ambiance, nicely sung and presented to start off.

Fire is the other song with potential for broader exposure. It would translate very well to a chamber choir of 16-24 singers, with its soprano overlay and modern but generally accessible harmonies. As presented here, the balance is a little off and the rock n' roll style bass line doesn't entirely work and sometimes goes just too low. But it wouldn't take much editing to clean up and send out into the world. In contrast, Amok Running just doesn't work, coming across like a derivative pastiche based on Bei Mir Bistu Shein and a triplicate bass line borrowed from Blondie.

The Hortus M. singers are best heard as a contemporary classical ensemble with jazz influences rather than a jazz group. The jazzier numbers are generally too staid for my taste when viewed through a straight jazz lens. As modern compositions they sit much easier on the ears. To get the most out of this recording, you also have to listen for what the composer is trying to say as well as to the singing here. Istengyermek — Deo Child, for example, sounds too hard for this quartet; its harmonies are just that much harder to lock, although a top group with lots of rehearsal time might be able to nail it. Likewise, Karácsonyi ima — Christmas Pray sounds practically un-singable with its huge range. But the piano accompaniment (the only one on the disc) is pretty and sensitive and the piece has some cool ideas that might find life in another kind of arrangement.

For the most part, these songs should be viewed as a sampler and not a song cycle. There are certain groups of them that work together (perhaps Love and The Passion, or Fire, Wandering and the pretty The Song). In general, the English numbers work as well as the Hungarian. The Passion could have benefited from consultation with a native speaker, as the arrangement passes through a four-syllable pronunciation of the word "extremely" that you'd say only if you'd never heard the word spoken properly aloud. The sound also requires some generosity. The singers generally sound clear and strong, especially the lead soprano, but the balance is intermittent and a few of the numbers suffer from distortion when the levels seem to have gotten the best of the recording equipment.

Overall, Vocal Spirit is an interesting album and shows a lot of talent on the part of the singers and the composer. I'd recommend it to anyone looking for modern new classical music and a sense of what's possible.

Let me be blunt: I dislike this album extremely. I don't like the style of music, I really don't like the intonation of the singers, I don't especially like any of the soloists, and I don't even like their accents in the songs that were sung in English. This may well have the lowest "repeat listenability" of any album I've been asked to review, and for that reason alone I need to rate Vocal Spirit a "1" even though others may possibly find more redeeming features in it than I do.

Backing up a step, the Hortus M. Singers are a Hungarian group of four singers — three women and a man. It's not clear if they are a professional group, or if they only do this in their spare time. The songs are largely their own compositions. The style is a sort-of avant-garde jazz. The melodies are strange. The harmonies are strange. Really not my cup of tea. Generally speaking, the bass constantly mimics a string bass while the three women sing melodies and harmonies above him. Several of the songs are wordless.

I may have been able to live with the strange harmonies if the intonation had been better. But it isn't. It's largely horrible. I tried to pick out the worst offender and was unable to because so many of them are off-key in so many places. And perhaps the worst thing about the poor intonation is that in many songs I genuinely can't tell if I don't like the strange harmonies because they are, well, strange, or if I don't like the strange harmonies because they just sound so bad due to singers being sharp and/or flat. You'd think that singing non-a cappella would help, but no — Karácsonyi ima — Christmas Pray uses a piano, and it's one of the worst offenders in this regard.

The production is nothing to write home about either. The bass often sounds strangely muffled. Same thing with the soloists. Mostly, if not entirely, the album sounds simply like four singers standing around four mics and recording themselves in single takes.

I apologize if my harsh words offend the group, but this is an album that should not have been.

Listening to Vocal Spirit is like spending an evening with a few old friends. The pleasant part of this evening is hearing the depth of stylistic and thematic ideas shared among this jazz/classical quartet. The bummer is that if you have not kept in touch with the Hortus M. Singers, you might not be too impressed with their unrefined presentation.

The Hortus M. Singers skip over the small talk of contemporary hits or a cappella classics, choosing instead to express themselves with original compositions. Imre Bogár, who penned the entire album, provides a wide variety of textures and moods that transition coherently from the stately Overture through to the exuberant Amok Running. The arrangements capitalize on the space available in a small group by incorporating classical-style countermelodies, improvisational-style solos, and spunky bass lines interwoven with percussion. After just a few songs in this intimate recording setting, you can't help feeling right at home with the voices of the Hortus M. Singers.

As inviting as the situation appears, the sloppy performing and mixing make for a slightly awkward visit. Even with a piano in Karácsonyi ima — Christmas Pray, the Hortus M. Singers are simply not consistent enough to hit every note. Amidst an air of dissonance, it does not help to have singers stretching their range and trying to rapidly enunciate "fa" and "va". A soft attack is appropriate on occasion, but I greatly preferred the clarity of "ba" in The Song. The only times the group really locks together are when upper voices sing "oo" on three-part harmony over a relaxed walking bass.

The album would be more amicable had the sound engineers been more careful. The shuffling at the start of Wandering makes it hard to focus on the buildup of the riff. The snipped soundbites at the end of Fire shatter the otherwise mesmerizing atmosphere. And the distortion on the lead in Gossamer is so harsh that I initially thought there was something wrong with my headphones. Missed notes and lazy production are passable for a neighborhood get-together, but a little primping goes a long way for a night on the town.

If you do find a copy of Vocal Spirit, listen to it from the end to the beginning. The most glaring faux pas are unfortunately clustered within the first few tracks, and it would be a shame to duck out before you get to the more energetic arrangements and cleaner performances in the latter half of the album. The Hortus M. Singers may not be pushing the envelope of sound production, but it's comforting to know that the spirit of traditional a cappella is still alive and well among friends.

This album is available for purchase at the group's web site and Acappellazone.