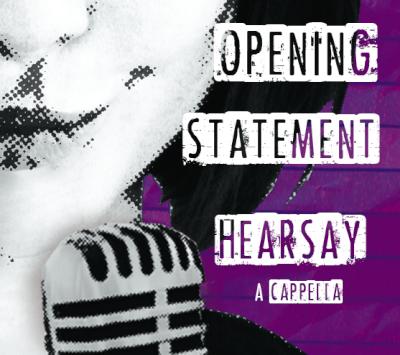 Thin voices and simplistic arrangements aren't helping this Opening Statement from the ladies of Hearsay A Cappella. If it weren't for thoughtful production, I'm not sure what'd be left to hang onto. The polish from the singers is here — they have certainly rehearsed — but vocal oomph and clever writing is not.

The arrangements on Opening Statement are the main shortcoming. Finding many of them too expected, redundant, and easy enough for a casual listener to memorize, I decided to count how many times the backs sing the same "Rumor has it!" sequence in Adele's hit. I count thirty-one times in less than two minutes. This is not imaginative work that acaheads will run back to. Nor is singing the same "jenna jn ja-nah!" run for nearly the full score of Call Me. It's hard to pay attention to or reward the lead when the compositions are this stubbornly unexciting. Risk, above all else, lands the reward. And how should one react when one of the primers for delivering musical tension, Zombie, doesn't have any natural musical tension — just filters added by the engineer? This is the unfortunate story of Opening Statement: what should be enjoyable just comes up short.

Though parts of Opening Statement certainly have more sparkle. I enjoy the smoky-voiced soloist, filled-out lower end, and playful groove of Don't Stop. And there's nice texture work and a thick atmosphere to envelop on Warning. The track list in general has a lot of promise: it's my first time hearing about half of these tunes done-up for an cappella release.

It's hard writing reviews like this because I know how much energy, money, and heart goes into recording collegiate albums. Been there, done that. All the best to these ladies from Cornell for a stronger outcome on the next go-around.

Nobody ever gets excited about jury duty. It's a chance to take a break from the day job, try something new, meet new people, and contribute to the community ... and somehow it's not fun. I've never been selected for jury duty, but I get the impression that the opening statement and subsequent trial is a lot of dry jargon interspersed with flares of impassioned opinion. That's the impression I got from this Opening Statement, too.

Hearsay has a dense arranging style that conveys about as much expression as courtroom legalese. Every song, except Warning, opens the same way with an assertive round of the primary riff. Once that tone is set, it continues almost without rests until the end of the song. The persistent overlapping "den jen jingaling" and "ja na na na din doh" jargon bulldozes over the nuances that would keep the song interesting, making it difficult to follow the emotions of the soloist or the overall song arc. The arranging style, tone, and tempo are so similar throughout that you really have to familiarize yourself with the melodies to distinguish between the tracks of Opening Statement.

From the sound of things, the performers and producers on this album might have just come from jury duty. You can hear the backgrounds toiling over correctness rather than conviction. It's evident in their strings of tongue twisters, and glaring when they hold out notes in the bridge of Rumour Has It. To liven up the performances, mixer Carl Taylor compressed and distorted or phased the bamboozle out of everything. It's almost tasteful in Lost and Found, but downright painful in Sick Love, Warning, and Zombie. I know the recording process can drag on, but you have to keep the energy flowing and the ears alert to give your best to the a cappella community.

There are a few songs that Hearsay judiciously put together. Don't Stop, Call Me, and Lost and Found are entertaining, and with some more careful arranging could be really good. I'm admittedly partial to Grace Potter, but White Rabbit really is a neat song choice that achieves the only dramatic build on the album. Locked Up is the most dynamic track thanks to arranger Louisa Thanhauser and a delightful solo by Regina Zaremba. These tracks are wisely spaced to keep your attention through the less inspired parts of Opening Statement.

I'm sure Hearsay is a fun group, thoughtful with their dynamics and excited about what they do. It just doesn't necessarily come through in this album. Crowding arrangements and filtering vocals has been a popular way for a cappella groups to adapt pop songs, but these techniques rarely do justice to the original. If you cut down on syllables and unnecessary studio magic, the performers and the audience can devote much more attention to the inherent power of vocal harmony. To get the most enjoyment from a cappella, just like jury duty, sometimes less is more.

With any good opening statement, the presenter is tasked with delivering content in such a way that the listener knows exactly where the story is headed. The ladies of Hearsay have me a bit lost with what they are trying to convey off in their album Opening Statement. Granted, this album has individual features that make for shining moments such as commendable production work and the occasional standout soloist. But as a whole, the project is missing natural passion and a level of connection that would otherwise have me ruling in its favor.

What is evident with this album right from the start is the level of production. The team at Liquid 5th blends the vocals of Hearsay with appropriate effects and clean editing that makes listening to this music rather easy. Call it a choice or preference, but I enjoyed the decision of Hearsay to not go with a super-octavized low end; it makes their recorded sound seem very natural and realistic.

Although production work is good, the issues with this album come from the occasional imbalance between leads and the backing group. Tracks such as Sick Love and Lost and Found illustrate these concerns as the leads are often overshadowed. It becomes difficult for an audience to connect with a song when it has no lead to hang onto. Other times, songs just feel as if they are lacking a connection such as with The Fear, or need more intensity as with Warning.

But Opening Statement has its moments of redemption, especially when Hearsay is backing soloist Saira Dayal. Dayal sings both Don't Stop and Rumor Has It with a soulful/indie vibe that just feels right at all times. Or when the group delivers Zombie by capitalizing on major effects and a sense of an emotional appeal that the song is naturally begging for.

The ladies of Hearsay still have a great deal of growth ahead as this album is full of mixed feelings. I am sure that at least one or two of these tracks are bound to grab your attention, even if it's momentarily.

Opening Statement is available for download from iTunes, CD Baby and Amazon.com. Physical copies are also available from CD Baby.