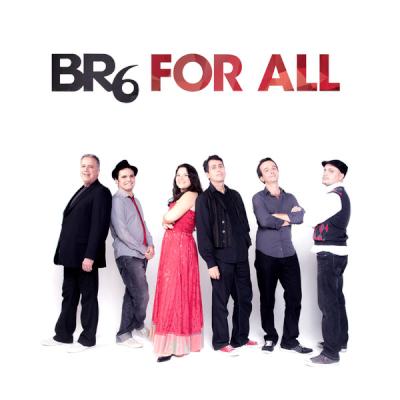 I love me some vocal jazz and I've been impressed by the little I've heard from BR6 in the past, so one would think their latest release would be right in my wheelhouse. At times, it certainly is. But almost as often, it falls just slightly short.

The key vocal jazz ingredients you want — terrific intonation, seamless blend, crunchy chords — are there in abundance so there's no cause for complaint on those fronts. These folks have been singing with each other for a while now and it's evident in the wonderful ensemble sound and group diction, especially in the faster moving passages.

What's a bit more hit-or-miss here is the arrangements. Always tight, but sometimes just a little too plain, straightforward and formulaic. In general, when the group has a decided point of view — preferably an unexpected one — on a given classic, the results can really be quite fun, engaging, and enjoyable. The Beatles Medley, created in collaboration with The House Jacks, is the high watermark for this sort of creativity, but the variety of musical pallettes and techniques employed in Libertango, and the slower-jam feel of Every Little Thing She Does Is Magic are consistently intriguing even if every choice is not my personal favorite.

Far less interesting are the predictable, deliberate covers of Human Nature and Play The Game, and a take on Signed, Sealed, Delivered I'm Yours that fails to differentiate between verse and chorus, offering the "Here I Am Baby"s as nothing more than another lyric like the ones that precede and follow them.

One aspect of BR6's inescapable approaches to every arrangement is a heavy reliance on layered and skilled vocal percussion. But somehow, what is clearly very accomplished work, is also a blessing and a curse. There is nary a track to be found here that doesn't have solid, anchoring vp. But it feels at times like the group becomes so dependent, or at least reliant, on it's percussion that the arrangements can take a vacation from doing much more than plodding along in homophonic echoes or syllabic fills. When the background vocals themselves are integrated with the vocal percussion into the creation of syncopated or unexpected rhythms, that is where the arrangement is most successful.

Of course, the knowledgeable among you may be thinking, "Hey, wait a second! This album won a CARA this year for Best South American album and was runner-up for Best Folk/World Album." To that, I say 1) the sample set of albums in contention for those awards is typically a lot smaller than other categories. And 2) BR6 consists of terrific individual singers and a fantastic ensemble who deliver smooth, easy listening vocal jazz with great aplomb. They just have to find a way to keep it all a little more sophisticated and a little more consistently surprising.

Brazilian music. What are your expectations? Mine are: the inclusion of fast music meant to shake your hips to; crazy rhythmic modulations and experimentation to get people amped during the shaking and samba rolls; and the kind of energy that goes into Carnival — floats and costumes and everything. Sometimes it's great when expectations aren't met on albums because it introduces you to something else entirely wonderful, but in the case of BR6 For All, I got a much more subdued party than expected. This release is more of a sipping cocktails affair: plenty of pretty music, some of it quite compelling, but the overall package isn't as fulfiling as I'd hoped for.

Nothing about these singers or the ensemble as a whole is "average"; that I must make clear. These are professionals from top to bottom. And not all of their music should be fast musical mayhem or we'd have too little contrast. Take Brasil Pandeiro, which is dripping with sultry vocals, genuine warmth and super smoothness, and an absolutely fabulous percussion track that really, truly, takes us away. I'm there, I'm in Brazil, dancing with smiling friends after dinner in the fading summer heat because of the happiness and authenticity focused into this track. But it's a mid-tempo track sitting in the middle of an album of lots of mid-tempo tracks, and that's certainly an overlying issue when you let this album keep rolling.

In the search for contrasts, yes, there's strong attention to infusing creativity into these arrangements. But too often, it's misguided because of abrasive syllables and deliveries, or just plain odd choices. I'm struggling with many of the arrangement choices. Why is the Mission Impossible theme intertwined into the oldie Signed, Sealed, Delivered? What musical or thematic relationship warrants such a jarring pairing? In a song with no words, Libertango, why do we have such hard nasal tones and overly aggressive deliveries? Is it representative of the hardness of the ballroom tango, or just because? Similarly, in Human Nature, the soloist has the most gorgeous and pleading voice ever, and she's paired against distracting background syllables. Contrasts within songs is really important, but achieving this through out-of-place background parts is a tough sell. When BR6 just simply sings and locks chords, that's often enough, because they're awesome musicians. Add in the cool percussion patterns with flavors of South American dance for support, and all the better, because then it's unique. And I'd expect that the most creativity would center on the percussion and rhythm because that's the heart of Latin music; it's the first thing hardcore a cappella listeners will focus on because of the album's origin. Best rhythmic presentation on BR6 For All? The "Ob-La-Di, Ob-La-Da" section of The Beatles Medley. That whole piece is so hot and fun.

So here's the thing: despite my personal preferences, I'm thrilled that RARB received this submission because we don't get a lot of Latin American music crossing our desks, and it's cool to hear what's going on south of here. I'll give this advice to BR6: take the music and flair that makes Brazil flashy to your friends higher north and showcase this one-of-a-kind heritage with fire in your notes but sophistication in your arrangements.

Sometimes, you put on an album and it just feels like home. BR6 For All, the latest from Brazilian sextet BR6, might not seem like such a fit for me with its steady undercurrent of Latin rhythms, a far cry from my normal "comfort music". Nevertheless, it became clear from the ringing of the opening chords that this was music I could really sit back and enjoy. With a smooth, grooving bassline, colorful melodies and harmonies, and creative, evolving arrangements, it's hard to imagine any true a cappella fan not finding much to enjoy here.

Starting with the most basic elements of rhythmic music, bass Symô glides up and down his range with a velvety richness throughout, locked in a constant conversation with percussionist Fabiano Salek's popping, skittering beats which are themselves restrained but crucial to the overall vibe of the album. Another fundamental element met with consistent success is the arrangement structure of each song. Regardless of which group member arranged the song (except for the joint collaboration with several House Jacks on the Beatles Medley, which I'll get to shortly), there are a few consistent traits. Each arrangement is simple in its bones, but adorned with changes from verse to verse, interspersed with occasional surprises to keep things interesting. Sometimes, the surprise is a restructuring of the melody, sometimes it's a reference to an entirely different song, but it never feels inappropriate. Ok, maybe the Mission Impossible theme opening to Signed, Sealed, Delivered I'm Yours isn't quite "appropriate", but it nevertheless works.

In choosing the tracklist, BR6 did a nice job of mingling classic American (Stevie Wonder) or British (Queen, Sting) pop music with more traditional Latin jazz and pop. In fact, they also did a great job of introducing Latin elements into the Anglo pop songs, nowhere more so than in The House Jacks' collaboration The Beatles Medley. Because the transitions and approach reminded me of the brilliant Beatles-themed concept album Help! released by Overboard a number of years ago, I wasn't surprised to find that the arranging genius behind that album (HJ member Nick Girard) contributed to this medley. The song works so well because it melds many elements of what BR6 does best (rhythmic percussion, light airy chords) with what The House Jacks do best (groove, fuzz, reinventive hooks). It is performed with love and respect for the original compositions, but also a fun sense of ownership for reimagining the originals. The song has everything I want in a cappella covers, and it has it in spades.

For an album that hits all the right "notes," this one is surprisingly restrained in the production department. This isn't to say it doesn't sound great (it does), but rather that it is far less heavy and saturated than many of the better-sounding albums of recent note. Kudos to Cylan Delgado (recording and mixing) for a pure, simple, clean sound which is authentic to the group's style and timeless.

Despite all this praise, BR6 For All is not a perfect album. The solos are good, but not stellar. Of course, when a group blends and works as well together as BR6, this is nearly a secondary criticism. Human Nature does little to distinguish itself from the dozens (ok, hundreds) of other a cappella versions in the past two decades, but does fit the group's style. Nitpicking aside, this is a fun, thoughtfully constructed, excellent-sounding album that should appeal to a broad range of interests. BR6 For All, indeed.

For sales or wholesale information contact Bo Crane at bocrane@pandisc.com.