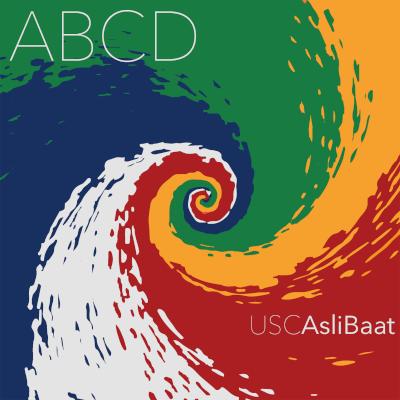 ABCD is about as elementary as its title suggests. There are just four tracks, stripped down to their essential structural elements and condensed into no more than three and a half minutes apiece. The collection is enough to establish both the American and Southeast Asian influences of Asli Baat's repertoire, but not enough to delve into any unique or uncharted territory. Fleshed out with consistent performances and production, ABCD provides the basics of a cappella with room for improvement.

There are certain tropes we have come to expect from collegiate Southeast Asian a cappella, and Asli Baat delivers. The EP opens with an English/Hindi mashup. It follows up with an Hindi pop hit and an English pop hit, and closes with a theatric Bollywood number. No surprises, but no complaints here, either. It's fun hearing the fusion of cultures and languages, and Asli Baat chooses a sampling that sounds both foreign and familiar in a way that makes you want to take to the Internet and find more.

Despite their different sources, all four tracks are stamped with a homogenous finish and lots of block chords. I Care is especially monotonous with simple whole and quarter notes plodding along to the chord changes. Dark Horse / Jiya Jale and Dastaan E Om Shanti Om have some textural variety but don't back it up with the dynamics necessary to create any sense of climax or closure. The post-production adds intrigue to the bridge of Manmohini Morey but otherwise muffles the backgrounds with too much low end and too much reverb. It's a heavy soundscape, so even though the arrangements are short, they tend to drag.

Only one part moves with any energy, and it's way more than ABCD can handle. It's the Pavlovian Percussion (also discussed here). It's prog rock double kick drums and hip hop turntable scratches and sixteenth triplet high-hats trying to race through songs that just aren't going any faster. A sprinkling of purposeful percussion hits can drive home the groove. A deluge of rhythms just blurs together into hissing white noise under the thick harmony of the vocals. It's easy to get carried away with the possibilities of studio percusion loops, but something simpler would be better suited to the style of singing and arranging.

ABCD is probably not going to blow your mind. It is, however, a mind-blowing improvement from the live-sounding album Real Talk that Asli Baat released in 2010. With ABCD, the group has found its feet in the recording studio and created a well-rounded collection of South Asian/American hits of the day. Mastering the ABCs of arranging, performing, and recording is an accomplishment. As Asli Baat builds on the basics to make statements of its own, the group will make even more wonderful contributions to the growing field of multicultural a cappella.

Asli Baat, the premier South Asian fusion group from the University of Southern California, provides a sampling of tunes in both English and Hindi on its recent EP release, ABCD. Although it isn't the most innovative or complex fusion work out there, ABCD is a polished set of four tracks that is easy to digest and enjoy.

The headliner in terms of tune recognition from an American standpoint is Katy Perry's Dark Horse, which begins the album with familiarity. I have some difficulty with the track — it's not offensive in any way; it's just short. It contains one verse and chorus of Dark Horse followed by the Jiya Jale tune, and ends without doing much in terms of chordal or architectural complexity. It's not displeasing to the ear in any particular way, but neither tune goes anywhere, providing a mediocre opening to the album. The platform of using Jiya Jale with a popular American song does not carry enough innovative weight with me, as it's not the first group I've reviewed this year with that idea in mind. Perhaps more interplay between the two songs and complexity in terms of form, or simply more content, could have sold me on this track. Manmohini Morey was a bit of a difficult track for me to dig into at first because of its unclear form, but with repeated listens I came to appreciate being taken on a melismatic journey filled with intricate syncopations. Unfortunately, not helping either track is that musicality is average at best, with little change in dynamics or intensity throughout long notes and phrases, which accounts for my difficulty in discerning the second piece's form.

Directly following are two tunes that are more readily digestible. It's no small feat to cover Beyoncé successfully, but with a simplistic arrangement behind her, Esha Roy's strong tone, flexibility, and emotional intention provide a focus on the soloist that makes I Care extremely effective. Dastaan E Om Shanti Om has the first male solo of the EP and rounds out the album well with a smooth lead from Mehul Nair over an energetic beat.

Perhaps some of the highest praise on this release belongs to Bri Holland of The Vocal Company for her studio work. Every track is well-balanced with tasteful amounts of reverb, helping otherwise simple arrangements transcend the page and read effectively to the listener without any one part becoming a distraction. This comes with just one caveat: the percussion often sounds too canned and is lacking in intensity in some places, namely the refrains of the last two tracks, in which the soloists primarily drive the song forward with something left to be desired from the vp.

ABCD is an EP that's easy to put on repeat because of its flow, tunefulness, and brevity. While it may not wow you with anything you haven't heard before from an a cappella group, this release is one that has elements to appreciate many times over.

ABCD is a clear-cut example of what Asli Baat is trying to accomplish on the USC campus. According to its Facebook page, the group's "aim is to provide singers of both South Asian and Western musical backgrounds with a platform to showcase their musical talents", and the group delivers this with a collection of tracks ranging from Katy Perry and Beyoncé to tracks straight out of Bollywood. However, despite some quality moments, ABCD falls short with regards to overall energy and musicality and relies a little too much on the production of the album to inject energy into the tracks.

Starting with the first track, which mashes together Katy Perry's Dark Horse with Jiya Jale, the soloist delivers a passionate performance in which you can really feel the pain and anger that the track demands. This energy from the soloist, though, is not entirely supported by the same power in the background vocals and sounds a little breathy, too. The change to Jiya Jale is a bit of a surprise, as the mood of the song completely changes to something more upbeat than what Dark Horse calls for. Though while it sounds a bit out of place, the change in song and mood increases the energy of the background vocals, which is definitely a positive for this track. By its end, Asli Baat does a good job in blending the two songs together — I just wish that I didn't have to wait until the last twenty seconds to hear how well the two songs can work.

As we progress further into the EP, the amount of production seems to increase, particularly in the bass and vocal percussion lines of the tracks. Both the songs I Care and Dastaan E Om Shanti Om are quite heavily produced in these lower parts, and it gives each of those parts a sound that doesn't sound very natural. More importantly, the amount of production takes away from the other voice parts, particularly the soloists in each of the tracks, each of whom delivers strong and passionate performances with lots of energy. The background vocals need to follow the soloist's energy by giving more to their individual voice parts, such as adding greater breadth to their dynamics and giving more attention to the phrasing of each line.

ABCD is a good starting point for Asli Baat, and I looking forward to hearing more as the group moves forward in the future. Until then, it may be a while before I give this EP another listen.

This album is available on iTunes, Loudr, and Amazon MP3.