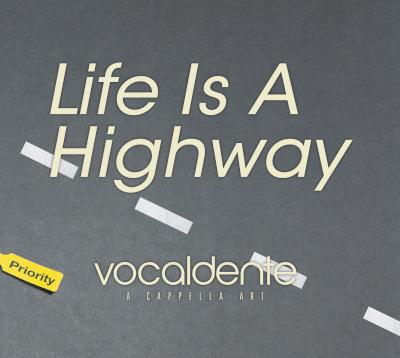 Life Is a Highway is definitely a grab bag — a vocal potpourri, a throw-everything-in-the-pot goulash — and I can't say the variety works in vocaldente's favor.

Our cover-heavy genre means we almost always receive albums with a lot of randomness. The track list for Life is a Highway is even more wild than a cappella fans are accustomed to, however. After a country-folksy version of Life Is a Highway, we whip a 90-degree turn for Teenage Dirtbag. I must say, hearing a quintet of strongly-accented Germans sing this high-school-angst anthem is just plain cool — definitely give it a listen to improve your mood, but be prepared to have it in your head for weeks, charming accents and all. And then, another sharp turn for a silly little German zinger, Kannst du pfeifen, Johanna?, that includes whistling, gurgling like fishes, conversational back-and-forths, talking in feminine voices, and some manner of sheep/goat/livestock noises. But we're in the a cappella genre, so I can handle the unexpectedness, and so can you, even when a zany Chop Suey and a charming Don't Worry, Be Happy roll around. But it's just far too much of a change to throw in the religious Prayer of the Children with metal just a few ticks beyond, and by the time Yesterday starts wrapping up the album, I've made up my mind: this isn't an album, this is thirteen singles released in a thirteen-piece collection. Absolutely nothing wrong with that, but cohesion certainly goes a long way toward heightening the listener experience.

There's also certainly plenty of room to add sonic density, should vocaldente desire. There's not a lot of layering here: you can easily conclude that you're listening to five voices. The sparseness gives works like Chop Suey an entirely different sound from the original — delivered with extreme melodramatics here — and offering fresh musical interpretations is one of the goals of a cappella, after all. But there's a whole world of techniques and approaches to apply to make some of these works much stronger, Chop Suey definitely included. Although, the gentle engineering hand does complement the ballad With Me very well, with a captivating result of warmth and closeness because we can hear the rawness of the voices. So if it's the group's preference to have the production take a backseat to the vocal talent, I support that; but at least use the tools at hand to fine-tune performances. To this point, the performance of Yesterday gives me concerned pause. If a professional group wishes to sing one of the most iconic, covered songs in history, right on par with Over the Rainbow and Happy Birthday, it needs to basically be gorgeous precise perfectness, because they're professionals after all. The blend in Yesterday isn't good, and the intonation gets a little wobbly, too. Seems like a good time for more digital tweaking to me.

Even with my criticisms, I can absolutely see why crowds love vocaldente: Life Is a Highway is definitely entertaining. I laughed, I gasped, I said, "No way!" The group's release is just not as organized and polished as it could be.

Life Is a Highway is an eclectic mix of cover songs by German group vocaldente. With a track list that includes the title track by Rascal Flatts, two children's songs (Kannst du pfeifen, Johanna?, and Der Kuckuck und der Esel), a version of the Beatles' Yesterday, various modern pop songs in German and English, a German rap (Ein Teil von uns), a Mormon-written prayer composed in response to ethnic cleansing in the former Yugoslavia (Prayer of the Children), and a controversial song which was airing during 9/11 and was pulled from the radio in the aftermath due to lyrics about suicide (Chop Suey), it's hard to figure out just what the group is going for. Perhaps it's a representative sample of what a live show would be like? Even though I enjoy nearly all of the tracks to some extent — and the children's songs more than most — I can't help but feel a studio album should be a bit more targeted.

The group, founded in 2005, consists of five male singers. The typical song features a tenor soloist, a bass, two harmony parts between soloist and bass, and a higher harmony part. Most of the songs (eight of the thirteen) do not employ vocal percussion at all. As can be surmised from the track titles, some songs are in German and others are in English. The group's English is very good, with only mild accents; very rarely does the accent detract from the song.

The two major issues which lower the quality of the album are arrangements and production. The arrangements are mostly uninteresting, on par with what an average collegiate group might arrange for themselves. They too often rely on block chords, a plodding style, and little rhythmic structure. I expect much more from a professional group! The production similarly seems a bit amateurish, with the bass often sounding artificial, inconsistencies appearing in the soundstage, soloists sounding muddy instead of clear, and abrupt timing synchronization at times which adds to the artificial feel. From a production standpoint, this album reminds me quite a bit of Momentum by Face, which I reviewed in 2009 ... which was fine at the time but a cappella production has improved substantially in the past six years, whereas this album seems to have been left behind.

It's no surprise, then, that the best track on the album, Kannst du pfeifen, Johanna?, is a relatively natural-sounding song with a clever arrangement. Parts switch around during verses with funny voices and natural sound effects. The voices mimick the conversation between Johanna (a young girl) and an adult (a parent?), where the adult repeatedly asks her if she can do various things: "Can you whistle? Can you sing? Do you eat peaches? Can you gargle? Can you complain?", concluding with "Can you be silent?" The singers alternately whistle, smack their lips, gargle, complain, and so forth. It's very fun. According to Wikipedia the song was originally performed by The Comedian Harmonists, an all-male German close-harmony ensemble that performed between 1928 and 1934. It's terrific to bring back an 85 year-old song so successfully! In case people want to hear it sounding more like the original (I'm guessing), vocaldente has included a second version of the song, a hidden track at the end, which uses fake static and scratching to give the song an early 20th century gramophone feel. Der Kuckuck und der Esel ("The Cuckoo and the Donkey") is even older, being a children's song from the early 1800's. That song describes a singing contest between a cuckoo and a donkey, and is mashed up with Bobby McFerrin's Don't Worry Be Happy. Seems a little odd but it works fairly well.

My second favorite track may be Prayer of the Children, composed by Kurt Bestor. It is a gorgeous song that starts with two voices in unison singing "Can you hear...", splitting into two-part harmony on "...the prayer of the children on bended knee, in the shadow of an unknown room?" Then full harmony appears with the lyrics, "Crying Jesus, help me to see the morning light of one more day ... Can you feel the hearts of the children? Aching for home, for something of their very own. Reaching hands, with nothing to hold on to but hope for a better day." Words are poignant, harmonies are tight, but the main strike against the song is that it lacks the natural expression of the two other recordings of it that I own (one by InsideOut, the other by Kurt Bestor himself). It's also confusingly followed directly by a pop/rap song (Problem) which kills the mood. Still a marvelous listen, though, just barely missing out on a "5" rating.

So what to make of Life Is a Highway? I've listened to it several times now and am still not quite sure. Perhaps you will need to judge for yourself.

Over the past few years, the world of a cappella has spoiled us a little bit in terms of quintets. Thanks to groups like Pentatonix, the House Jacks, and Home Free, the standard for any a cappella quintet is unbelievably skewed towards constantly and consistently pushing the boundaries of what can be done a cappella. The norm for any quintet is quickly becoming a bass and vocal percussionist that can present an entire song by themselves, and three high-caliber soloists that work seamlessly with each other to present every other little piece of musicality present in the song that forces them to have tremendous vocal range and constant dexterity. When I first saw that vocaldente is another a cappella quintet, I was expecting them to be a German version of these famous American quintets. Boy, was I wrong.

Life Is a Highway has a sound that is quite unlike anything else I have ever heard. None of the singers in vocaldente has that same "pop" timbre that has become the norm in modern a cappella. Instead, their vocal timbres are similar to barbershop music, which leads to some astounding blend and energy. However, instead of singing your standard smattering of barbershop songs, vocaldente presents songs like Ariana Grande's Problem, plus Prayer of the Children, System of a Down's Chop Suey, and a smattering of both serious and comical German songs. The range of styles and emotions vocaldente reaches is absolutely unbelievable. Many a cappella groups have a repertoire that becomes somewhat synonymous with the sound. The House Jacks have a repertoire that is particular to them, much like Pentatonix and Home Free have repertoires that reflect their individual sounds and talents. In many ways, vocaldente is the exact opposite. Their style is a little of everything, with voices that make it possible. Listening to their album is like going to a family show. Everybody is going to find something they will like.

However, vocaldente becomes victim to the saying "a jack of all trades, and master of none". There are some shining moments, such as Kannst du pfeifen, Johanna?, where the timbre of the voices gives a perfect jovial presentation. I know virtually no German, but I found myself smiling as I went along the musical journey. This track is a great example of how musical emotions should be irrelevant of the language they are presented in. On the exact opposite spectrum, darker songs like Chop Suey are hindered by vocaldente's generally brighter sound. The presentation is well done on this track, but doesn't exactly promote emotions in the same way as some other songs do. The group's cheerful energy is readily apparent across the album. Unfortunately, the same sound that leads to tremendous overtones and great high spirits doesn't necessarily translate well across all tracks.

In closing, I present a challenge to vocaldente: the range of songs presented needs to be narrowed a bit. The massive amount of diversity accentuates both the merits and flaws of the group. It is very easy to see which songs stylistically fit the sound of the group and which fall short. However, if the group could harness the elements of the arrangements that really let their sound and energy shine and further apply it, the final product could be amazing. There is never anything wrong with being a jack of many trades. However, I would love to see what happens if vocaldente truly masters a couple.

This album is available from iTunes and the group's online store.