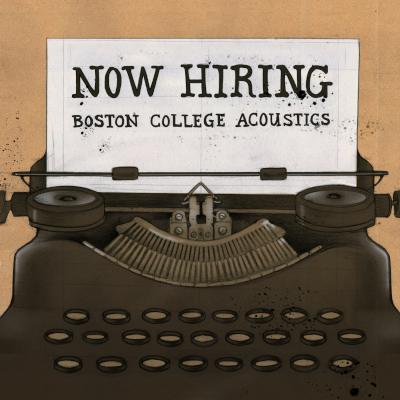 The latest from the Boston College Acoustics, Now Hiring, hits you hard and hits you fast. Sure, the first twelve seconds may seem a bit cheesy and a little cliché, but the remaining three and a half minutes of the opener more than make up for it. Hold It Against Me is quite a track, playing well between Matt Moyer, a strong beatboxer driving the charge, a strong and sultry soloist in Julie Gill, and backgrounds that fill all the gaps in sound without giving sensory overload. By the time the dubstep-influenced effects take place around the two minute and fifteen second mark, I'm in musical heaven. I can still pick out all of the voices. The integrity of the beatboxing still shines through. There's even a miniature quote from Toxic, another Britney Spears hit. The opening statement made by the Acoustics is incredibly strong.

The Acoustics never manage to reach that precipice again. The remaining tracks are an amalgamation of songs with a large amount of potential, but are dragged down by some rather subpar presentation ideas. Paris (Ooh La La) is the poster child for this, where the opening two and a half minutes sell the hard rock ideas. However, around the two minute and forty second mark, the "ooh la la"s being sung as the foremost thought are sung with an immature tone I would almost consider reminiscent of a small child. This immature sound is then later paired with a small note cluster that doesn't fit the established sound of the song. While this sound may fit the lyrics of "you've got me high as a kite", it puts a serious dent in the sound that was previously established. The overall damage to the track is rather minimal, but my ears were begging for a little break after listening to this song.

By the time Call Me came around, I was becoming rather disheartened with this album. While there were glimpses of excellence throughout many of the tracks, there was just nothing that really compelled me to love this album. Now Hiring feels like the Acoustics tried to run a marathon like a 100 meter dash. While you can sprint for the first part of a marathon, you're going to find that you will run out of gas rather quickly. The Acoustics did just that, pushing forward fast, and then never having the energy to keep the album going at such a high level. There are moments where the energy is trying to push forward, but it's never as good as it was at the start. By the end of the album, it feels more like a relief that the race is over rather than a strong and confident finish. The Acoustics found the energy needed for a top-notch performance, but they'll need to learn how to maintain that energy to produce the high-caliber album that they're capable of.

It's hard to miss the immediate irony in a group called the Acoustics utilizing heavy effects to kick off its album Now Hiring. But it's the best kind of irony when it totally works and immediately hooks you in. The typewriter percussion is very cool and leads in nicely to the electronic sound of Hold It Against Me. And that successful use of effects continues the rest of the way through the album. The production team does a great job of utilizing effects without going overboard, providing just the right amount of oomph to make some of the less acoustic (pun intended) songs click.

Keeping the good vibes going, I want to specifically give shout outs to Olivia Lynch and Matthew Michienzie, the two standouts on the album for soloists. On Bennie and the Jets and You Are the Best Thing, respectively, Olivia and Matthew bring such raw emotion and style to the songs that I want to listen again and again. It was just a bonus to get to hear them wail some more on the bonus track Call Me. And props to the group for featuring a different soloist on each of the first seven tracks; it's always great to show the wealth of talent that you have as a group.

The group's approach to arranging helps and hurts at the same time. In each of the songs, the arrangement is built around the solo, which works great with an all-star soloist. However, when you have a soloist just hitting the notes, the arrangement needs to hold its own. In Hercules and My Immortal, I would have loved a fuller sound so that the solo doesn't have to carry as much of the weight.

At the end of the day, the Acoustics have put out an album that has its high points with no real low points, and this reviewer will definitely enjoy listening to the album again and again.

Now Hiring is my first sampling of the BC Acoustics, and while brief, the album definitely leaves a solid impression.

I wasn't a fan of Hold It Against Me when Britney did it herself, but somehow, the Acoustics actually made it work for me. I was pleasantly surprised. Alternating between grimy, basement "untz-untz" dance beats, and the brighter, more choral a cappella style that most are used to, the Acoustics really take control and shape the song into their image. With creative production on the vocal percussion and a healthy energetic backing sound, it's hard not like this one.

I was excited for Justin Timberlake Medley, but it just doesn't really do it for me. Where's the cool? Where's the swag? The soloist has the Justin-esque runs and whispery falsetto down, but the whole track has an oddly karaoke feel that disconnects me from the piece. Rhythmically, everything feels just a bit a wooden, mathematical. The production bells and whistles are nice, but the groove and danceability just aren't quite there to make it a true JT tribute.

Bennie and the Jets gets a thumbs up. The groove feels mostly nice and steady and soloist Olivia Lynch does well managing a delicate balance between soulful angst and effortless rhythmic gliding over the track. It's a keeper in my books.

You Are the Best Thing is by and large my favorite. The arrangement isn't anything crazy, but the energy is well-kept and the solo is one of only a few I've heard in awhile that feels organic. Lead Matthew Michienzie sings with a good understanding of the genre and the soulfulness in his voice doesn't feel forced. There aren't too many extra twangs added to diction that often cheapen the sound of a track, a mistake many groups make when trying to achieve "authenticity" when covering folk, blues, or soul songs.

Now Hiring is a great spread of diverse styles in a convenient package. Overall, there's a great sense of musicality and an understanding of various genres throughout that allows it to nimbly navigate various tastes.