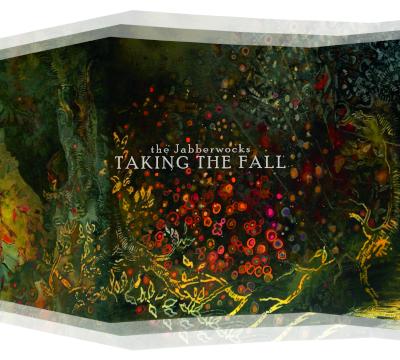 Winning voices make the Jabberwocks' latest offering a sweet refuge, a great relief when wading through another a cappella compendium of pop radio standards. In 2016, one good-quality album of a cappella covers blends into another in ways that would have blown my mid-90s mind right out of the sky, which is noteworthy since I've been reviewing Jabberwocks recordings every couple of years for the past two decades. The group has consistently strung a nice bunch of songs together and this year is no exception.

Sweater Weather is the best song on the disc and the perfect opener. Upbeat, enthusiastic and wonderfully led by Jesse Weil's lead vocals, the song stays tight and to the point. Intonation slips for the rest of the disc, oscillating between pretty good (Stitches, Bad Blood) and kind of spotty (anything slow). In some places, the middle voices don't add up, while in others the falsetto notes don't lock into the chord, and overall a lot of the backgrounds don't quite gel. For the most part, the production picks up the slack, with one notable exception. The reverb and (I presume) dashes of autotune are all wrong for Farewell — the group would have been better off to record the song in a church or some place resonant and let it get a more acoustic glee club sound. As it is, the compression and studio-recording sheen combine to take all the give out of the blend and tuning, turning a charming piece of nostalgia into a missed opportunity.

I like nearly all the solos. The Jabberwocks chose their material well and the frontmen come across convincingly and well-matched. Taking The Fall also has a nice palate of soft pop, leaning toward R&B on some songs, indie pop on others and adding a bit of swing for Spiderman. For the most part, this group keeps hold of its rhythm. There are also a few nice turns in each of the arrangements — for example, I quite liked the doo-doo-doo cascades at the end of Stitches. An arrangement doesn't have to be revolutionary to be fun.

Overall this record didn't wow me the way that JABBERTALK did in 2013. But the singers sang, keeping their focus on the heart of the music, and that makes Taking The Fall a worthy addition to the catalog.

Taking The Fall is a winding road, showing off some breathtaking new vistas worth stopping the car for, but also visiting landmarks we've all been to before.

Pack your camera for the first three knockout R&B/hip-hop tracks that would make for an EP hard to top. Sweater Weather has an almost 80s vibe meets current hip-hop, with a slammin' solo and lots of gorgeous phrasing in the backgrounds. In addition to "gorgeous", words and phrases that will come to mind frequently while listening to the backgrounds of these first three tracks include: luscious, vertically locked, quite musical, unified, shimmering, and divine. This is all especially true despite the aggressive, fiery solo and rap on Power Trip, creating a stunning inner-song contrast that's a thrill to take in. Another welcome contrast is the grittier vocal percussion of Bad Blood mixed with the honey-voiced lead who has perfect falsetto. These three songs work as a mini-collection and demonstrate the best of the Jabberwocks.

Then we take a sharp u-turn into Expected Collegiate Territory. Me and Mrs. Jones has a simple crooner/barbershop feel from an era gone by, and its arrival is wildly jarring backed up against the opening numbers. Spiderman is all old-time snappy swing, and yes, it's indeed the familiar theme song for Spiderman. Not to slap all the fun out of a cappella, but yeah, its inclusion is pretty unexpected in the middle of an album that opens with such elegant complexity. We remain in Expected Collegiate Territory for the rest of our journey, with some strong offerings along the way. The staccato, almost calypso beat of Human Nature is fresh and engaging, and Drift Away makes the beloved tune wonderfully beautiful and warm with its arranging and swirling energy.

Arranging issues certainly creep up in this back end, starting with Stitches, which is a little shaky from the start and finishes with an arrangement that's a bit too grating in its syllable choices mixed with dense vocals. And while it's truly charming to hear old school Ben Folds, transcribing a piano and a man with a wholly unique voice still proves to be a feat here, and wrapping up Brick with a pretty choral chord just doesn't work. Lastly, this is the same interpretation of Cry Me A River you've already heard in the a cappella circuit, and it just can't compete with the fresher works on Taking The Fall.

The Jabberworks keep their quirky tradition of closing with Farewell to remind us to "Beware the Jabberwork". It speaks of their brotherhood. Taking The Fall speaks of unlimited potential if the group focuses on a tight album showcasing only what the Jabberwocks do best.

Taking the Fall feels like it was made by two completely different iterations of the Jabberwocks. There is such a stark contrast in quality between the first few songs and later songs that it's hard to track the reason for the turn for the worse as it progresses.

The album starts pretty strong with Sweater Weather, Bad Blood and Power Trip / Mine. Despite some issues maintaining momentum throughout each song, the core sound is quite strong, soloists deliver great performances, and arrangements fill space with the voices well. They each also have good attention to smoothness and groove.

This sense of groove, however, starts to falter in Me and Mrs. Jones. It's still there for the most part, especially thanks to Robert Lee's excellent work on the solo, but the arrangement and performance have hiccups that impede the whole thing from being excellent.

The groove is then completely thrown out the window in Spiderman. The stiffness throughout the song is evident as early as the throaty opening bassline and the shoehorned (and uncredited) insertion of Sing, Sing, Sing (With a Swing) by Benny Goodman. It shocked me in my listen-throughs of this album that the same group that recorded Bad Blood recorded this song, especially since the same member, Robert Lee, arranged both.

Human Nature, Brick, Cry Me A River, and Drift Away all suffer from stiffness issues as well. Intensity seems to stagnate, there is less attention to momentum between sections of songs, and arrangements seem to accent peculiar yet uninteresting vocals and rhythms through large stretches of songs. Oftentimes, it feels as if attention was too focused on imitating the sounds of the original song, rather than on emulating the emotion and feeling behind the original. These are sometimes minor faults, but they serve as distractions when they are so heavily accented.

The album's finale, Farewell, is questionably executed on almost every front. Heavily produced, pitch perfected voices with zero momentum between phrases does not sit well with this style of music. Jesse Weil's melodramatic recitation of the poem, while cute, doesn't seem fitting with the rest of the song and album. The very end of the song seems so uncertain and underwhelming that I could've sworn there was more to the song that just went missing. I fully understand what the Jabberwocks were intending here, but that doesn't mean I can commend the execution of said intentions.

I must also make note of issues regarding the album's liner notes. I cannot emphasize enough that crediting original performers is not nearly as necessary as crediting composers and songwriters. Taking The Fall includes the former while omitting the latter.

There are strong moments on Taking The Fall, and creating a foundation out of those moments is imperative for the Jabberwocks to improve for future releases.