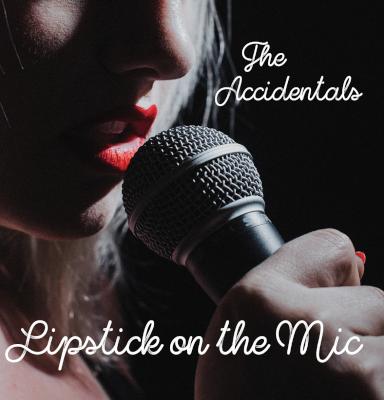 Lipstick on the Mic is the 25th anniversary album of the Accidentals, an all-female group at the College of William and Mary. Interestingly, it sounds like it was recorded 25 years ago. With all of the studio magic out there these days, it seems to be a deliberate choice of the Accidentals to forego much more than a little reverb. They don't use an octavizer to give the songs more range. They don't use Auto-Tune, which shows mostly in the solos of Unstoppable and Outlaws. They don't loop and tweak their vocal percussion so that it sounds like a real drum kit.

Lipstick on the Mic is purely vocal, a throwback to the way things used to be, when an album succeeded or failed on the merit of the voices in the group. Judged by that yardstick, Lipstick on the Mic is a relative success. With the exception of a few pitchy moments and some forced mash-up choices (Rolling in the Deep into Crazy, and Uptown Funk into Levels), the Accidentals have put forth a sweet, homogeneous-sounding album, despite the wide variance in song selection.

Judged against modern standards for recorded a cappella, however, Lipstick on the Mic falls short. The "large auditorium" reverb, uneven mixing (for example, Bridge Over Troubled Water is a choral piece but the melody gets lost at times), and boom-tsk percussion are a nice stroll down memory lane but do not make for an exciting listen.

At 18 tracks and 59 minutes of music, it also feels overly long. The sameness of the songs does not support the decision to include all 18 tracks. When I Say A Little Prayer by Dionne Warwick has the same feel as Million Reasons by Lady Gaga, something needs to change.

The liner notes announce that this is the 25th anniversary album, but do not explain further. Context would have been nice. Is Holding Out For A Hero a song they've done for 25 years? How about Wonderful World? More information could have justified the decision to include so many songs on the album.

The liner notes also feel like a throwback in that they do not list original performers, which is nice information to have (along with original songwriters). I've provided the original performers for you below along with information on the more obscure musicians covered. If you long for the days when a cappella was naked voices, this album may be for you. If not, pass it by.

We've been invited to a 25th anniversary celebration with Lipstick on the Mic. Despite the ambitious track list with a framework to show off girl power alongside freshly sung classics, Lipstick on the Mic is a rather decaffeinated offering that's also held back with shaky musicianship and novice-sounding arrangements.

The Accidentals have twelve prior albums listed on their web site. That's a big and notable legacy for 25 years. Thus, I expected a lot more polish and finesse on Lipstick on the Mic, and a strong sense of, "We've been at this a long time, and here's the best version of ourselves." But serious issues abound, starting with vocal technique and musicianship in the very first measure. I can't recall a recorded opener in recent times that starts with a shaky scoop up to the pitches. Such uncertainty continues uninterrupted in this very long-play release, with all manners of vocal troubles openly exposed without correction, from vowel matching, to cut-offs, intonation, and blend. All of this could have been buffed into finer sheen long before laying down tracks, and most of this could have been improved with digital tools, but alas, the mistakes are right there, not making a very good impression for the Accidentals. I respect purely vocal music, and prefer to listen to purely vocal music over highly processed music, but the wobbles really take over each song. If I were the music director, I would approach my next recording (which is so labor intensive and financially challenging, and thus worthy of extreme preparation before hitting "Record") like an athlete training for the big game who drills (in this case, measure by measure) with their teammates for their biggest opponent, the only one who they really need to win over (which is, of course, not critics like us, but themselves).

While the overall execution could have been improved through production, you can never fake real energy, real sizzle, and a sense that singers are palpably driven by something unseen but truly felt from singing together. (This connection is why we like to sing in groups in the first place, no?) The prominent lethargic background singing gives all of these tracks a coating of timidness and almost sadness, even when the tune instructs us to be happy. Unenergized singing also makes pitches droopy and genuine dynamics and phrasing nearly impossible, putting singers at a big disadvantage immediately. My ears didn't perk up until the stylish and sultry, "How you gonna fix it, fix it, fix it?" run up the scale in Damaged. (And that occurs in track twelve, which is often a closing number on full-length releases.) And note that that's just one little moment; oh to have such presence-filled moments stitching together each song! Then your album would become full of personality and spice.

However, a lot of the leads completely showed up to front these pieces. The lead of the aforementioned Damaged is definitely feeling her words. And most notably, I am absolutely envious of the note-smacking soloist Jessica Campbell on Million Reasons. Her ability to sing across registers strongly without an audible break and to stay in the rhythmic pocket against shifting tempos is rare and impressive. We're also treated to unique soloist timbres and colorings on Lipstick on the Mic, especially in XO and Crazy. None of the individual solos across the release sinks a track, which leads to curiosity on why the background ensemble singing sounds so weak as each voice's primary role on this album is in that same background ensemble.

As for the penned backgrounds, with the exception of the most thematically-constructed Damaged, the arranging itself leaves a lot desired, too. Often built on orderly moving block chords for the verses, and more frenetic lines for interest in the choruses (that have a tendency to interfere with the lead line in the mix), there's not too much to praise enthusiastically. One area to refine for future pieces: each soprano reaches a point in her upper register where she should be singing full, enunciated sentences very sparingly, not regularly; clear tones will carry more strength and impact.

This review was largely written to the group instead of the consumer. Perhaps there will be more to recommend after tenacious rehearsing, arrangement editing, light (?) studio tool usage, and learning to build energy off of one another.

There's a certain sense of odd nostalgia that accompanies this album. With Lipstick on the Mic, the lovely ladies from the College of William and Mary celebrate their 25th anniversary as a collegiate a cappella group. Personally, I love anniversary events in collegiate a cappella. It's amazing to watch how the young adults from years ago have now transitioned into the real world. However, once those alumni step back on the stage, it's like nothing has changed and they are back among the family they have known forever. I immediately saw the track listing and anticipated it to be that reunion of both past and present members singing the arrangements of years ago and today. Unfortunately, this reunion tour has many flaws that really prevent the Accidentals from putting their best feet forward.

The first thing one will notice is the recording quality of this album. Lipstick on the Mic doesn't sound like it fully utilized the abilities of the recording studio. The sound quality is very similar to live recordings, where the group performs in a soundproofed room with one microphone in front of them. This creates problems, as the balance becomes very skewed very quickly. The bass and percussion aren't nearly as prevalent as the upper voices, which partially removes the anchors of pitch and tempo. Without these anchors, the drive of some of the more modern songs such as Levels and Youth fades away. This listlessness transfers into the energy and the tuning of some of these songs, too, and leaves an unpleasant taste in the mouth.

The other major flaw that bothers me is the lack of dynamic contrast. Across the album, the majority of dynamics appear in the mezzo-forte range. Of course, this is roughly expected in some regard — the sound technicians are going to be balancing the levels and keeping the overall volume of the album relatively consistent. What's more concerning is the lack of energy across the album. Consider the song Bridge Over Troubled Water. It can be inferred throughout the song roughly where the dynamic is softer and where it is louder. However, what's presented is one energy level that is somewhere between the two. The changes in dynamics are going to be driven more by energy when volume isn't a factor. Therefore, without the energy providing the difference between piano and forte, all that the listeners get is a monochromatic presentation.

Even with all of the criticisms I have, there's always a light at the end of the tunnel. There are no major fundamental flaws in the presentation. All the arrangements have strong moments. Soloists come across well, if only hindered by the recording quality. All that is left for the group is to find how to take their skills and present them better, whether that's through a different recording method or finding a better way for their energy to reach the audience. However, after 25 years, the ladies of the College of William and Mary have found their skill set. Hopefully before their next 25 years, they will find a way to present these skills successfully.

This album also streams on Spotify.