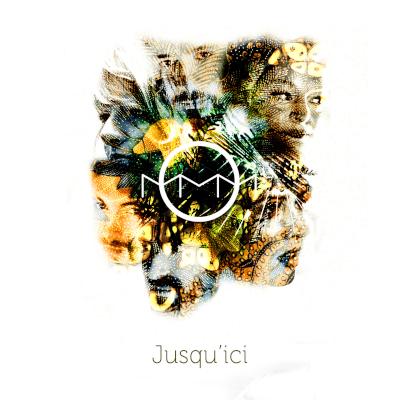 Jusqu'ici is unlike any a cappella album I've heard before. With an electro-acoustic sound that seems in many ways reminiscent of the performing artist Bon Iver, this French sextet takes the listener on a unique, yet overall somewhat underwhelming experience.

The titular track for this album tells a lot about this group. Jusqu'ici opens with an African mbira arpeggiation that is the underlying drive of the first verse. The pattern repeats many times throughout the song — it's clear that the group is more focused on the auditory experience rather than its defining factors. Vocal digitization is used intermittently in the song in varying degrees. The first is the record-skipping effect that occurs and the other is the use of pitch correction, which is fascinating. Sometimes, the bass is almost corrected too far to the point that it sounds more like a tone generated electronically rather than vocally. Conversely, during the phrase "jusqu'ici tout va bien" in the chorus, almost no correction is used. This results in minor tuning errors from the notes an octave apart from each other. Overall, the groove of this track is very well-presented and I like the musical ideas. However, once that superficial level of a first listen has passed, the layers underneath start to reveal some issues in the sound.

What a Wonderful World is an interesting spin on a classic piece of music. Replacing the peaceful original backings with a driving bass and percussion accented by upper vocals is an interesting move. The feel of the soloist changes to almost haunting. However, there are moments where the backgrounds are not in tune, taking out all of the feeling that these haunting moments have by instantly shifting from groove to confusion for the listener. When the bridge comes, I've lost the direction of the entire number. I can understand why the bridge is there and the value the group wants it to hold, but the haunting drive needs a climax to go to and instead the track is suddenly stuck in neutral. This track doesn't ebb and flow, it just drives. It makes for an interesting case study, but the musicality of the piece becomes lacking. When the song ends rather abruptly on a chord, it doesn't give any sense of finality to the piece and leaves a bitter taste.

Jusqu'ici has a great set of ideas that lack cohesion in sound and execution to work properly. The juxtaposition between the acoustic and digital sounds is a bit jarring when at the extremes. Ommm has to be very careful to make sure that when the differences are noticeable, they are still relevant and performed well. Otherwise, what happens is a lackluster presentation highlighted by issues in sound as opposed to a unique offering accented by flashes of never-before-heard ideas. It's a line that Ommm currently walks on the wrong side of, but a few quick tweaks could bring this group towards a really fascinating style of music.

Jusqu'ici, the third and most recent release by the French group Ommm, is well-produced and a decent listen, too. Ommm is composed of four singers — one "human beatboxer" and one "dub master", according to Ommm's website. This group has been around for about ten years and has an active presence throughout Europe. The group's experience together shines through on this release.

First, two of the tracks are in French. Like some other RARB readers, I am not a French speaker, which makes this cross-continental submission refreshing and different.

Second, even if I had a limited understanding of the lyrics, the group does a good job at creating an aesthetic through its execution of the songs and engaging production. We're talking animal sounds (birds), weird swamp sounds (like bubbles hitting the surface of a muddy swamp), and wind sounds. Of course, the ordinary vocal percussion is also there to keep the tracks moving. Sometimes the effects distract from the singing, but most of the time they add helpful texture.

Third, the four singers are decent and do a good job blending with one another, even on crunchy jazz chords. All of the solos are female solos and are consistent, even if they won't blow listeners away (this is more of a group-focused EP).

Finally, I enjoy the arrangement of What a Wonderful World, the mainstay song originally performed by Louis Armstrong. The arrangement takes the elements of the original but morphs it into a jazzier, more eerie and haunting rendition. Armstrong has such an iconic voice and the song is so well-known that it is nice to hear a different take.

My main takeaway after listening to this release is that an EP-length project is enough for this aesthetic. In achieving this cohesive EP, Ommm forwent the inclusion of more varied tempos, styles, and soloists. After four songs listeners will get a good idea of the aesthetic, and will probably enjoy it, but there is not enough variation to keep listeners excited about a longer album.

Ommm demonstrates incredible musical proficiency on Jusqu'ici, but a lack of polish and foundation in the core sound holds back this group of amazingly talented singers.

There are so many individual points of praise for this EP. The solo work never falters for a second — every song is brought to life with an amazingly warm, vibrant, and expressive melody line. Arrangements have a constant sense of intention and purpose — no individual voice part or vocable part feels arbitrary, while mixing effects from production fit the emotion and arc without causing distraction. There's a constant melancholic and unsettling vibe in these songs, and Ommm explores this texture extensively. From the moment the song Jusqu'ici began, I knew I was in for something unique.

I must also give a shoutout to both Jusqu'ici and Ding Dong for being originals, and doubly so since these are also easily my two favorites on the EP. The group obviously has a lot of investment in them.

When a group has so many things going for it and so much demonstrable musical ability and experience, it becomes frustrating when the singers are held back by something as fundamental as tuning and blend. Instances of close harmony and homophonic lyrical singing consistently don't lock, and cascading textures between different voices often border on a chaotic sound. It's hard for me to pinpoint any single defining issue behind these problems — it could be balance, intonation, resonance mismatch, or any combination of the above. Whatever the root cause may be, it is incredibly distracting on otherwise great tracks. My enjoyment (and in a way, scores) on individual tracks became contingent on how noticeable the problem was on each piece.

What a Wonderful World is especially held back by such problems when the homophonic held-out "world" repeats so often, and it never sounds clean. On that note, What a Wonderful World is also the only song where I question the need for that melancholic and unsettling vibe I mentioned earlier. Unique takes on previously composed and performed songs is always encouraged, but such approaches should still hopefully remain true to the lyrics in some way. The minor take on this song simply doesn't match the unequivocally hopeful and cheerful lyrical content, and the execution is not polished enough to sell me on it.

This, of course, is not enough to keep me from enjoying Jusqu'ici as a whole. There is so much good to latch onto here that I'd still easily recommend giving this release a listen. In the future, however, I would love to see Ommm polish its core sound — it would give me a reason to be completely immersed in the final product without a single hint of interruption. The importance of a cappella fundamentals cannot be overstated, especially for a group that obviously operates at such a high level.