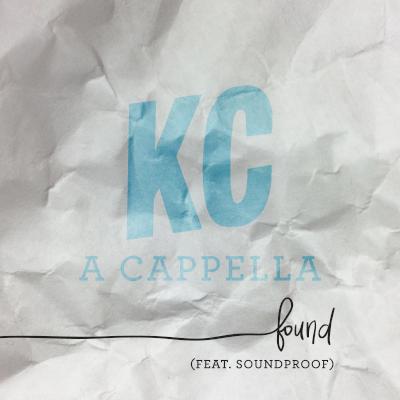 Found is a successful and inspirational release, featuring talented young voices coming together to make uplifting, precise, bold music together. If I could spin a digital record, this one would go 'round and 'round for a long time.

The group SoundProof is part of a larger non-profit organization, KC A Cappella, that hopes to have several groups in its Kansas City line-up. SoundProof, specifically, is a mixed ensemble of students who've auditioned from different Kansas City high schools. Found is like a business card, because if you don't know SoundProof yet, you will now. Unbridled joy is this group's signature sound, carrying through each piece so very audibly. Enjoy your first dose of happy on Something Beautiful, where the high-octane aca-choir stays fired up throughout and there's earnest emotions from all.

Though Creep is absolutely not a joyful song, it sure sounds that way here. You may like it, or maybe you won't. I can't fault the singers' innate personalities, but the treble-heavy offering really needs more of a bottom anchor to pull off this chart successfully. It's still interesting to hear, and I suggest you do to form your own opinion.

Lastly, we're treated to the power anthem You Will Be Found, sung with voices that sound far more mature and seasoned than their real ages. There is life here, lots of it, and delightful mixed-voiced shared leads that harmonize perfectly, that are absolutely peanut butter and jelly and fresh bread (Max Pinson, Naomi Turner, Devyn Trondson). The group's arrangement (Rob Dietz) and delivery of You Will Be Found could work as a single. It could also stay as the closer. Or it could work as an opener, or in the middle, or any where you want. You Will Be Found just works, and you'll replay it immediately.

Nothing but clear skies ahead in Kansas City. Pick up Found and enjoy this pristine music.

The barriers to entry in the recorded a cappella catalog have lessened substantially in the past decade. This is great because many more groups have access to quality recording opportunities, quality arrangers, and quality instructors/directors.

Yet, the resulting flattening of the sound quality curve places inordinate pressure on groups, that now have to work harder to make performances stand out.

KC A Cappella is a non-profit project devoted to fostering a cappella in the Kansas City high school community, and the group's three-song EP lays bare the increasingly difficult path to noteworthy recorded a cappella.

The production and tuning here are good, consistent with the global trend. In key remaining areas, however, KC A cappella has decidedly mixed results. Something Beautiful showcases a contagious exuberance over a dynamic arrangement that highlights the group's youthful energy. Sadly, it is followed by a flat, tone-deaf cover of Radiohead's Creep. This song is in well-known and well-trod territory, and selling it anew requires either a spectacular performance or an intriguing arrangement. Offering neither, KC instead reimagines the song with a startlingly chipper, light-FM version wholly devoid of the angst and isolation at the core of the song's essence. You Will Be Found, from Dear Evan Hansen, finds a middle ground, beginning empty and a bit lethargic before growing both in complexity and energy. Eventually, the song attains the vitality and excitement captured in Something Beautiful but it takes a while to get there.

To the extent albums or playlists reflect an effort to capture a group's personality, voice, or vision, this EP just isn't quite consistent enough to stand out in the a cappella catalog, but the group is clearly on the right path and should look to build upon the success of Something Beautiful.

SoundProof, a high school group that pulls top singers from the Kansas City metro area, has released an EP that is thematically consistent, well-executed with strong soloists, and well-produced, too.

Sometimes a group will release an EP as a mini-yearbook album or as an appetizer for a more substantial release in the future. This is not inherently bad, but it can limit the success of the EP by lacking the completeness or thoughtfulness of a full album. SoundProof doesn't have to worry; this group has put together an EP that makes a statement and stands on its own.

The first song is Something Beautiful, originally by Tori Kelly. The song is about the beauty of heartbreak, support for the heartbroken, and optimism for the future. Naomi Turner does an outstanding job on the solo and carries the song. She captures the essence of the original and gives listeners a rich alto tone and passionate belting. She is gentle when she needs to be gentle and assertive when she needs to be assertive. It's as if she's saying, "Okay, I'm here for you in this sad moment, but let's celebrate it and move forward as stronger people." Her approach works.

I enjoy the arrangement of Something Beautiful as well. Outside arranger Isaiah Carter gives listeners good texture throughout the song. I especially enjoy the tenor line which often echos the soloist. I think the second chorus could have been more intense to better contrast with the verse that comes after, but this is a minor gripe.

Creep, originally by Radiohead, comes next. Arranger Robert Dietz incorporates cascading background parts, swelling block chords, and a tempo that gives listeners the ability to really immerse themselves in the chords and singing. Soloist Devyn Trondson does a fine job expressing the pain of the original, but at times she does not sound fully invested. It may have been a deliberate choice, but I would have liked more variation and build between verses and choruses to establish a better arc to the song. In both the arranging and solo execution, the song loses some of the intensity and rawness of the original without rising to the challenge of perfecting a different interpretation. But, even if not perfect, I appreciate this different approach to the song and the solid execution on the whole.

The EP ends with You Will Be Found from the Tony-winning musical Dear Evan Hansen. It rounds out an EP that centers around emotional pain and giving affected people acknowledgement and support. This track is well-executed. Max Pinson brings an earnestness and tone that is perfect for this song and both Turner and Trondson bring an equal intensity to the table. Sometimes the intensity of the soloists is not matched by the background parts, especially in the chorus around 2:30 and the last thirty seconds or so of the song. However, I think arranger Robert Dietz (and the group) did a good job shortening the song from the original and adapting it for the EP without losing quality. This is one of the stronger arrangements of this song that I have heard.

Found is just over ten minutes long and worth a listen. Each of the three songs are stylistically distinct but come together nicely on this EP. SoundProof and the all-star production team of Ted Trembinski, Ed Boyer, and Bill Hare make these tracks shine. Go check it out.