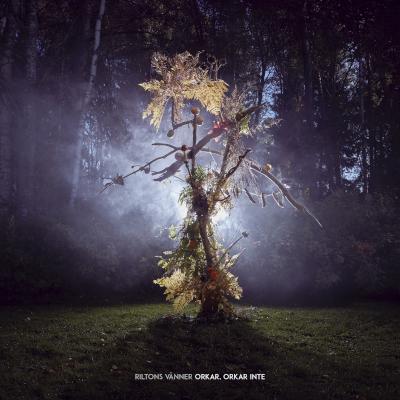 Riltons vänner is as good as you've heard. Excellent singing, mid-tempo pop goodness, and no annoying parts are the highlights of Orkar, Orkar inte, the group's third release to come to RARB and the first to come to me. The warmth of the group's sound and the shimmer of the blend make every track worth your time, with enough variety for you to feel good picking your favorites.

True to form, I prefer the softer, folkier numbers. Sebastian Rilton's soaring solo on Ta mig för en människa and the acoustic break-to-reverbed fadeout of Kommer du ihåg? are particular highlights. Interestingly, both of these tracks are effectively two songs in one. The former switches from ballad into a hair-rock coda, perhaps echoing the consistent hair-pop-and-a-little-showtune vibe of the preceeding Så viktigt. Very Scandi. For Kommer du ihåg?, even after multiple listens I haven't quite convinced myself the two parts are the same song. The first part is a boppy number with the same forward motion as Your Smiling Face-era James Taylor. I like it a lot. Per previous, the ending is my favorite.

Of the dancier numbers, I fell for the synthpop of Var min vän. The percussion sounds vocal throughout, while the background flips between an electronic groove and something more recognizably vocal. It has a good beat and you can dance to it. Orkar inte, another dance track, is a little more '80s — channeling Bowie, maybe? — but I never clicked with it.

The name of the band is Swedish for "Rilton's friends," and I would have to say Rilton has very good taste. My favorite female lead on the album is Linnea Rilton, and I should point out that Skäms is especially lovely, possibly also my favorite. Sebastian seems to have done most of the arranging, along with his songwriter friends. It's interesting to hear an album of original music where the songwriters and the singers don't overlap, although Peter Sydén helped record and produce so I guess that makes him a member of the band in addition to composing two-thirds of the songs.

Google translate offers several different translations for the title of this release, none of them clear and all of them intriguing. You should listen to this album and see for yourself.

Founded in 1999, disbanded in 2010, and reformed again in 2015, the former winners of the CARA for Best Folk/World Album of the Year are in top form on the group's sixth album, Orkar, Orkar inte.

Riltons vänner ("friends of Rilton") delivers an unexpected and deeply emotional journey this go-around. It's like running into a first, true love after many years. The reunion reminds you of who you were and all you felt in a rush of beautiful and profound emotions, and yet all the while you see this through your older eyes, confronted with how you've changed, for both better and worse. Orkar, Orkar inte is equally joyous and bittersweet, breathy and effortlessly blended, smooth, intense, imaginative, and inviting. What Rilton and his "vänner" say about themselves: "We can manage. We can't cope. We get stuck. We are passionate. We are playing. We get scared of each other. We become afraid of our longing. We dare to take our longing seriously."

Orkar, Orkar inte is wholly original — a rare achievement in a cappella, rarer still for its excellence, all penned by Peter Sydén, Mathilda Lindgren, and Peter Hägerås. The not-so-secret sauce is the founder, Sebastion Rilton, who arranges every track except one, which he co-arranges. My commentary on the group's 2008 album continues to hold true for this brilliant new release: "The arrangements, intertwined with the production, are beautiful servants, providing the leads and songwriters with what is most needed. They bloom gracefully, presenting themselves simply, yet with subtle complexities. Somehow Riltons vänner can deliver bold chordal surprises with a grace that leaves their power intact while steadfastly assuring us of their inevitability."

Deeply human performances with a firm touch of bionic studio enhancements make Orkar, Orkar inte perfectly listenable, a balance of intimate and powerful. If MP3s can wear out from repeat plays, these surely will. And for those who like to actually wear things out, or perhaps those who just appreciate analog warmth, you can get this release on vinyl, another rarity in stream-centric a cappella.

Unfamiliar listeners seeking a touchstone may reference the sound of the US's Arora (Sonos), Denmark's Dopplers, or even some of Germany's ONAIR, but here, similarity is not imitation. And while these differences could be examined in fine detail, the most immediate is simply that Orkar, Orkar inte is Swedish. For the large majority of the world that does not enjoy Swedish fluency, relax; that's "inga problem alls" (no problem at all). The music is so compelling, so story-esque on its own, that it's more than sufficient to feel narrative without the immediacy and precision of language. In some ways, it's more freeing. And as an added plus, for those who work or study to background music, Swedish isn't likely to cause jarring distractions.

As on prior releases, Riltons vänner prominently features the females of its ensemble, here Linnéa Rilton, Johanna Löf Cervin, and Mia Greayer. Their universally heartfelt and powerful deliveries make that a successful choice. But the men, Mr. Rilton and Daniel Greayer, are in excellent form as well, a notch better, in fact, than on some prior releases, making for a particularly well-balanced sound.

I have two complaints regarding the album. The first is mastering. It's very good, revealing all of what it should, but in just a few scattered moments of "too much", it's not quite up to the excellence and seamlessness of the underlying mix and performances. Most listeners won't even notice or care about these few moments. The second complaint is that the album is simply too short. It's probably wise planning to leave us wanting more, but as a result, well, you will want more.

Orkar, Orkar inte means "can, can't" or "I have the energy, I don't have the energy". But it also refers to the daisy-picking romantic game Americans know as "she loves me; she loves me not". For those hoping for love, the hopeful party takes a daisy flower, picking off one petal at a time. For every petal they alternate between "Älskar" (loves), and "Älskar inte" (loves not). When the last petal is picked, you of course hope for "Älskar", which means that the object of your affection loves you. At least according to the powers of flower prognostication. The title deliberately conjures both that hope, and also the general mixed feeling of those with kids, working too much, sometimes getting high on what life's offering, and sometimes getting veeery tired...

The title's meaning may be multifold, but the bottom line for listeners is much more simple: Orkar, Orkar inte is a must-have.

At an a cappella convention in 2007, an audience member asked the panel a time-old favorite: "If you could only take one a cappella album with you to a deserted island, which would it be?" I told him, Här är passion by Riltons vänner. The group's particular brand of a cappella — jazz with influences of funk, classical, and a touch of blues — wasn't well known to (or frankly, appreciated by) American a cappella ears, but I absolutely craved it.

Imagine my sadness when the group split up a few years later.

And now, imagine my delight to have these singers back together again!

Fourteen year have passed since the release of Här är passion, which is two lifetimes in the sound production realm. If that record led me to label it as "sound lounge" music where "the walls are red velvet and the waitresses only serve cosmopolitans", Rilton's 2019 offering is decidedly futuristic space music (courtesy of mixer Peter Sydén, who also carries the majority of composition credits). Thick with sound effect ambiance, freestyle tempos, and a fair amount of laid back spoken-word performances, Orkar, Orkar inte is a well-designed mood-altering experience.

The first two tracks are as mainstream, radio-ready as Riltons vänner offers on Orkar, Orkar inte. Vad är det? features gorgeous, easy-going ensemble singing under a steady, bass-percussion groove — as accessible as this boundary-pushing group is willing to record. Orkar inte is the token slick and dancey piece.

And then we time-travel right back to Riltons vänner signature-style work with track three, Håll mig hårt. If Sebastian Rilton isn't on your list of all-time best basses, I trust this is because you simply haven't heard him yet. Thankfully he's popped up in the mix for your enjoyment throughout Orkar, Orkar inte, though you should respond quite affectionately to his bass duties on Håll mig hårt as well as Gav mig av.

Is now a good time to say that the ladies of Riltons vänner are basically real-life sirens? There's nothing mystical about their enchanting and elegant vocals — I'm assuredly under their spell, with their work unforgivingly strong on Så viktigt and Skäms.

I'm thrilled that the recorded discography, but moreover the musical innovation and continued friendship, marches forward for Riltons vänner. My only pause with Orkar, Orkar inte comes from the aggression and distortion of Så viktigt, simply because there's less space for the sensitivity and nuance that Riltons vänner offers so easily. I'll happily buy whatever this group is selling, though, and you'd be wise to do the same.

Orkar, Orkar inte is available in digital, and CD and vinyl formats.