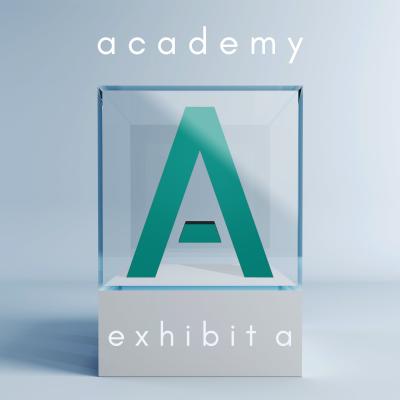 Exhibit A is the type of album that your party guests request when they're wanting a bit more oomph pumped into their night. It walks a fine line between pop and rock, spanning a few styles and decades, and throws in a few surprises along the way.

The members of Academy, from the University of Bristol, are an absolute riot from beginning to end on their latest album, offering plenty of entertainment, crafty arrangements, and fresh vocals. Perhaps the most incredible feat about this project is Academy's ability to deliver vocals that make you forget it's a university group.

It all starts with a banger, no pun intended, as the group's voices shine on Bang Bang Bang. The track features an assortment of vocal arcs, whether it be in the group's meticulous execution of dynamics, mastery of the lyric's French diction, or the style switches that maintain such modern appeal. It's a hip track filled with gooey effects and tantalizing singing.

What You Know keeps the swag train rolling as Academy pulls off a sophisticated sounding track that doesn't settle for simplicity. Academy's rhythm section is at its best here, as the song teeter-totters between rock and jazz stylings. The song has a forward movement to it that constantly pushes the beat without becoming chaotic. What You Know is easily the best track on Exhibit A.

Listeners will enjoy the contrasting elements that Bitter Sweet Symphony and Living in the City bring to Exhibit A. The former invests heavily in a methodical buildup, led by the vocal efforts of Academy's stunning bass lead. The substitution for a more dialed back, patient arrangement compared to the original's anthemic and percussive laden feel makes the experience more dramatic in the best way. Living in the City is the opposite, relying heavily on an in-your-face rhythm created by an otherworldly vocal percussion performance. Pairing this with balanced vocals helps to keep the listener engaged as the album rolls along.

If there was ever a track to catch listeners off guard, it would be Big Girls. Queen meets MIKA meets Dirty Loops in this fast-paced, rip-roaring, comedic three-and-a-half-minute jam that you must experience.

If you're a fan of the technical aspects of an album, No Time to Die is a track that you'll love! The mixing and editing are phenomenal. More importantly, it's the album's most emotionally charged track. And Love Me is a funky, joyful track to simply kick back to, and just let yourself groove to a fantastic soloist.

While technically sound with countless incredible auditory moments, Exhibit A suffers from an imbalance of emotional singing. I find myself really connecting to only two of the featured tracks, which feels strange given the full throttle energy Academy brings to the table. I hope that moving forward, the group can find a way to better infuse emotional conviction into its projects.

If you are still trying to convince your one friend to finally start listening to collegiate a cappella on the regular, just go ahead and use Academy's debut album as your Exhibit A evidence. Ok, yes, that pun was intended and admittedly somewhat forced — I'm not apologizing for that. But, all puns aside, Exhibit A may just be one of the more complete albums that I've heard in a while, and it's truly incredible that the guys of Academy managed to put together such an album while separated from each other in the midst of a global pandemic.

Former music director Felix Dickenson arranged all seven tracks on the album, and he simply did a masterful job in balancing the essence of each track while showing off his own level of musicality and creativity. Big Girls is just one example, with the arrangement staying true to MIKA's original Big Girl and the group knocks it out of the park. But to then throw in Queen's Fat Bottomed Girls in the middle of the track with the same feel as the MIKA track instead of what is traditionally a punchy rock track works surprisingly seamlessly. Then there's The Verve's Bitter Sweet Symphony, where Dickenson decided to completely turn the song on its head by having the overall emotion and feel of the song match the lyrics much more closely — more melancholy and more reflective than the original. But the biggest decision of all for Dickenson was to not use the iconic violin motif that runs throughout the entirety of the song. Instead, there's a steady pulse from the lower voice parts in the verses and a lot of held "oh" vowels in the chorus. While this is quite the decision to make given how famous that violin is, I think it was the right one given how drastic the emotional pivot was that Dickenson undertook. If I'm honest, I'm not sure I'll listen to The Verve's rendition in the same light.

Great solos are not in short supply across the album — all of them cut through beautifully (shout out to Liquid 5th Productions for the great production value on this album) and are delivered with plenty of power and vocal finesse. Many of the tracks have multiple soloists, which then adds the additional music ear candy that are lyric harmonies. Living in the City is a great example of this, where Teddy Trenowden, Tom Carron, and Harry Clements come together at the end after trading the solo off with a beautiful three-part harmony that's blended to perfection. Clements is also showcased on the opener Bang Bang Bang with Kaylan Patel and Charles Crow that's just non-stop fun.

If there is one track that I must nitpick, it's No Time to Die, and it's more of a personal preference than anything else. A great strength throughout the whole album is the musicality of these tracks, particularly the focus on dynamics throughout the tracks, and the growth from the beginning to the climax of the track in the final chorus. And while both Ali Manclark and Seb Waddington deliver great solos, the arrangement is too strong in the beginning and therefore doesn't allow the arrangement to go anywhere by the end. The original track, as performed by Billie Eilish, is very ethereal at the beginning and gradually grows in intensity and volume by the end as more instrumentals are added. The strong vocal from Manclark and a heavy percussion from the start prevented that Bond-esque opening, which may have been the intention from Dickenson given his choices for the arrangements in the other tracks. And while I do not have a problem with the vocal percussion being added at the start, I would have gone a little lighter with the snare (which is quite pronounced) and more high-hat/fill, eventually growing to more snare by the end. It would have helped the overall arc of the song. Again, I'm nitpicking here as I do enjoy the track. I mean, an English collegiate group singing Bond ... does it get better than that?

I know we're not far removed from the release of Exhibit A, but I'm already eagerly waiting to see what Academy introduces as follow up "evidence" for its next exhibits and releases. This album was quickly added into my rotation of a cappella jams!

As I started listening through this album, I found myself having an odd sense of déjà vu; much of this album feels vaguely reminiscent of itself. Looking through the track listings, only Felix Dickenson is listed as an arranger for the entire album. On the one hand, there's some serious kudos that need to be given. There's a lot of faith shown by the group to have one person arrange the entire album, and Dickenson has some serious chops. However, it becomes apparent that his bag of tricks is only so large, resulting in many musical themes and ideas being rehashed and repeated throughout the album. These themes fall roughly into two chunks, the uptempo selections and the downtempo pieces.

The uptempo pieces are centered around rhythms. Consider What You Know. The piece starts with a simple pattern. Then, the pattern changes slightly in the second half of the first chorus. The pattern evolves further by the chorus, and the changes continue to cascade. By the time the end of the piece rolls around, no fewer than ten different patterns or sections have been shown off. The problem stems from a strong desire to maintain interest, but some of these rhythms are bordering on the limit of how fast the human mouth can be manipulated. This complexity becomes tiring to me, and the soloist gets lost in a sea of background ideas. By the end of the piece, I'm not convinced I am listening to one song, since there are so many ideas thrown in all at once. There's nothing unpleasant about any of these moments, but the lack of idea continuity is problematic by the end.

The downtempo songs could more correctly be described as edgy power ballads. No Time to Die is one of these pieces. This song is constantly driven forward by a stellar haunting baritone solo from Ali Manclark. However, by the time the second verse rolls around, many of the same ghosts come back to haunt the piece. There are again a large number of background rhythms, but we get the inclusion of a duet from Seb Waddington. The issue is that, by the time we get to the bridge, this piece has the same issues as the uptempo pieces. The ideas in the piece have gone through so many changes that the climax is robbed of some impact. The technique is sound, but the musicality is severely impacted because there are no opportunities for the emotions to enter the song.

Exhibit A could be greatly impacted by the phrase "less is more". There are no bad ideas or sour notes thrown anywhere into any of the songs, but the music becomes so supersaturated that the story arc and the big ideas of the piece get drowned out in a sea of small ideas. Academy should take more time to really analyze the pieces, define what the most important parts are, and then make sure those moments are fully on display. There's a lot to love, but a good amount of room to grow as well.

This album streams on Spotify, Apple Music, and YouTube Music.