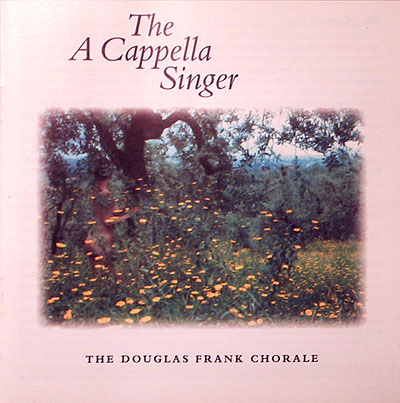 Madrigal likers can bask in the glow of the Douglas Frank Chorale with a CD that has created a mood, as well as an album.

Bright, Renaissance-y choral music, sung in standard madrigal SATB fashion — that is to say, with soprano melody and domination — reminds me of high class Sunday brunches. Light streaming in through a kitchen or dining room window. Large wooden table with white tablecloth or embroidered placemats, perhaps some cut flowers or evergreens, since it is always fall or winter in the high class brunches of my subconscious. Neatly dressed, educated people milling across beige carpet or hardwood floors, champagne glasses in hand, making sleepy small talk or eyeing the kitchen to see when the food will come out. And cheerful, Englishy choral music wafting out of aging speakers and misting the whole scene over.

It's a mood — it's not relevant that some of the songs are in German or French or Italian. They don't even need to be distinguishable. All that matters is that the chords are in the right places, the voices are dulcet and trained, and periodically there is a song — or a lull in conversation, or a distraction — that makes someone look up and say, "My, how lovely this music is.".

This album is a lovely way to import that mood to your dinner party, breakfast in bed or late-night history binge. The singing is fine, if not arrestingly spectacular in the way of the Tallis Scholars. The liner notes are excellent, with garden party imagery, full lyrics, and a few scholarly notes. And the song selections are familiar, cheerful and varied enough to avoid mood-breaking monotony.

The A Cappella Singer is a safe gift, a reliable purchase and a sturdy example of the music it sets out to convey. Madrigal mood associations are sure to follow.

This fast-paced album showcases the Douglas Frank Chorale's grasp of the madrigal, chanson, etc. genres. The composition of this disc is based upon a collection (The A cappella Singer) of 30 musical pieces, published in 1936. While the Douglas Frank Chorale performs these (now) canonical pieces quite well, the songs seem to lack an emotional depth and technical precision that would pull this album into the territory of excellence. Some of the dark songs aren't dark enough (Adieu, Sweet Amarillis), the happy ones not sufficiently joyous (Flora Gave Me Fairest Flowers, Matona, Mia Cara). Even though the Douglas Frank Chorale pulls off a couple of quite intricate arrangements, the group often gets off to a rough start (i.e. In These Delightful, Pleasant Groves).

There are also moments where tuning could be better. With this type of music (for the most part, four part choral), the music truly shines when the harmonic frequencies really ring together (a la barbershop). Otherwise, what differentiates an adult small ensemble from a high school choir? Sensitivity, dynamics, pronunciation, shaping, blend, and timbre, definitely. The Douglas Frank Chorale exhibits many of these abilities, but seldom all at the same time. Furthermore, the balance of the parts sounds really off; the production has the sopranos up too high while the tenors are mixed too low.

If you enjoy madrigals and songs from the 13th-16th century, you may be like this disc. I would also recommend it to those who want to hear some quality renditions of the aforementioned genres and are particularly interested in professional-quality performances of these pieces. But for those of us who are always looking for something *more* when listening to the music of our high school days, I would think twice.

The Douglas Frank Chorale is a not-for-profit organization based in New York, consisting of ten very talented individuals. Their latest creation, The A Cappella Singer, is the first recording of thirty specific popular Renaissance classics. I think I speak for everyone else in the world by saying, "Thank you".

A collection of French chansons, Italian and English madrigals, and Russian romantic part-songs is truly a treasure to add to your music collection. The problem is that this particular recording of the collection is hampered by minor musical and interpretational flaws.

Rest, sweet nymphs is an exception to the rule. This four-part lullaby by Pilkington is simply beautiful. The Douglas Frank Chorale creates the texture and haunting melody of this madrigal almost better than the composer could've imagined.

Matona, mia cara is the essence of what I expect out of an album of this nature. Great dynamics, diction, style, and musical passion. I dare any chorale in the nation to sing the "Don, don, don, diri, diri, don, don, don, don" refrain better that the Douglas Frank Chorale. It's just not possible.

The downfall of a project including tracks as superb as the two previously mentioned is that you hold the rest of the album up to a greater standard, and if it doesn't live up to that standard, the album looks bad. Unfortunately for the Douglas Frank Chorale, parts of this album don't live up to this standard, and actually, some are so far below the standard I doubt that they can even see it.

Now is the month of Maying from Thomas Morley is a fantastic piece of music that the Douglas Frank Chorale makes sound dull and muddy. They rush the song, not allowing for individual diction and style to take shape with each syllable. The song leads itself to a big dynamic push, and when it finally comes, it's in the wrong place. I wanted more tension here...it never happened.

I found it odd that the songs sung in the English language seemed to have much less dynamic contrast than the songs sung in other languages. Many times, in So ben mi ch'à bon tempo for instance, I wish the soprano voices would've sung with the same intensity and aggressiveness that the bass and baritone voices conveyed. Little changes like this would make a world of difference on an album such as this.

This album is a collection of some of the best music available from the Renaissance period: almost a greatest hits album, if you will. The Douglas Frank Chorale deserves a lot of credit for a good project, but because of the promise showed on some tracks, I am left wanting more out of this album. Until some other chorale records this collection better, I'd say add this album to your collection. You won't be disappointed.

Fact is, The A Cappella Singer from The Douglas Frank Chorale really deserves two reviews: one for its concept and another for its execution of said concept.

The concept was to record the collection of songs published by Schirmer in 1936 as The A Cappella Singer, a sort of hit parade of a cappella music centered primarily in the Renaissance, but moving forward all the way to the late 18th and early 19th century as well. It is the Chorale's hope that the album will take on added significance as an archival resource and a primer for future generations of singers.

As a concept, the album is flawless. The repertoire was, of course, not up for discussion, as it is directly taken from the Schirmer publication. The extensive liner notes, replete with both biographical information about each composer and specific details about each song, greatly enhance the listening experience. Other groups recording period music could take a lesson from this album in how to take the edge off music which, for many less adventurous listeners, is often discarded as dated, inaccessible, and unintelligible.

As for the execution, the result is a bit short of flawless. Mind you, the singers are talented and very much at home in the various musical styles they explore. Further, easily maneuvering through homophonic and contrapuntal settings, through English, French, German and Italian, these singers are clearly dedicated to their craft. Nevertheless, a few stray notes here, a diction problem there, and it seems to my ears that many tracks fall just short of excellence. Specifically, notes on the extreme high end result in occasional scooping or overshooting by the sopranos, moving interior lines nag at the tenors, and the fine line balancing crisp pronunciation with understated "f", "t", and "s" sounds is not always toed. Ironically, although counterpoint is a staple of this music, it is in the more homophonic pieces that this group truly shines with beautiful tuning, balance and musicianship.

If you have only a passing interest in Renaissance music, this album will likely prove too esoteric for your tastes. (Frankly, if you have only a passing interest, any full album might be too much for you.) If you're an absolute perfectionist, you'll need to turn to groups like The King's Singers or Chanticleer, who have expertly tackled much of the same material. But if you only want to keep a few "classical" CDs in your collection, and you're willing to make very minor sacrifices in performance for the sake of history and diversity, this could be a must-buy.

Congratulations and thank you to Mr. Frank and the Douglas Frank Chorale for doing what someone should have done decades ago: recording the immortal The A Cappella Singer, front to back.

If the plain title of this anthology, described in the outstanding liner notes as "one of the most widely circulated and often printed musical anthologies of the 20th century", doesn't ring any bells, don't worry, because you are probably more familiar with it than you think. It's a perennial classroom favorite, and choir veterans will easily recognize warhorses like Sing we and chant it, Now is the month of Maying, and Mon coeur se recommande à vous.

The sheer ubiquity of The A Cappella Singer virtually guarantees this album a good degree of popularity and longevity. Teachers and directors will rejoice to finally have a reference for choosing and teaching The A Cappella Singer pieces in their classrooms. But the Chorale didn't create some kind of publisher's sampler here. Instead they expanded and updated the songs "to a contemporary adult sensibility" (to once again quote the marvelous liner notes), all the while observing traditional balance and voicings.

My one caveat is so much a matter of taste that I'll mention it only briefly. I would have preferred a flatter, clearer recording. Sometimes words are lost in the reverb, despite excellent articulation. But all in all, a worthy addition to both the casual and professional music library, as a teaching tool or a soundtrack for a relaxing day at home.