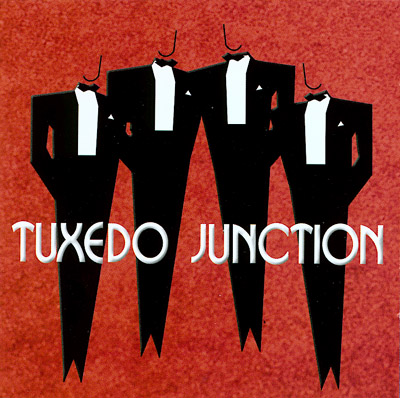 Tuxedo Junction. I can't figure out if they're barbershop or doo-wop. Maybe both. Maybe more. Track number two, Java Jive, now exists amongst the ranks of a standard vocal jazz standards that have been overdone to death. Track nine is entitled Birth of the Blues. Hmm. In any case, Tuxedo Junction delivers an album full of favorite tunes, from (presumably) their namesake, Tuxedo Junction, to When I Fall in Love and Silhouettes. Their arrangements are original and fun, adding new inflections to otherwise old songs. And unlike many of the barbershop groups I've had the grand fortune of reviewing/hearing in the past couple of years, Tuxedo Junction (the album, not the group or the song) contains more than a few songs where everything comes together: tuning, sensitivity, solo, arrangement, and production. Their liner notes discuss how much the group loves the music that they perform — and you can tell. Most other groups performing these tired old songs would not do them as much justice as is done on this album. You *can* really tell that these guys love the music, and that's what makes this a great album.

Highlights of the album include a fantastically mournful Midnight Rose (love the suspensions there) and a special appearance by the daughter of one of the gentlemen on Lida Rose/Will I Ever Tell You?, which is very sweet.

On the downside, there's a dullness to the production, which could have added a critical sparkle to the album of oldies but goodies. The sound is also extremely dry (except for In My Room, oddly enough), and there are times when a bit of wetness (reverb) would have been welcome (solos, climactic chords, etc.). Additionally, the energy that they apparently exude in concert (according to the liner notes) is noticeably lacking on Tuxedo Junction. I know that of all things lost in the translation from live performance to canned audio, energy is nearly always the most difficult to recapture. And unfortunately, even though their careful interpretation of each song reveals the love they have for the music, they were not able to communicate that energy here.

Tuxedo Junction is a great record for those who love new renditions of their favorite barbershop, doo-wop, and light jazz songs, but may not be ideal for those searching for something more groundbreaking.

I'm likely to have Tuxedo Junction's self-titled debut album ringing around in my head for a while. Mind you, that's a good thing and a bad thing.

First off, know that I don't listen to a lot of barbershop. That said, I have to believe that these guys are at the top of their game and among the best at what they do. Their blend is superb, their diction flawless, and their intonation dead-on. It's equally pleasing to note that they are a barbershop quartet proud of singing pure barbershop. Unlike some of the groups I recently sampled on the Barbershop's Best CD, who are blurring the distinctions (for better or for worse) between barbershop and vocal jazz, doo-wop and/or classical a cappella, these guys are the real McCoy. Accordingly, they're likely to stay with me as prime examples of barbershop's finest.

So what's the bad news? Well, I have one major beef with the Tuxedo-ed gentlemen: volume. Specifically, too much of it.

Now, I love a nice, bright, major chord as much as the next guy, but these folks never met a fortissimo they didn't pounce on with voices blazing. With one or two exceptions — most notably the tender tone of Lullaby — I defy you to find any dynamics below mezzo forte (or perhaps mezzo piano if given the benefit of the doubt). As a result, there is a sameness of tone throughout the album that grows tiresome, especially in some of the less imaginative arrangements of songs six through ten.

While on the subject of specific songs, a quick word on my scores listed above. This album needed a scoring system a la figure skating which awards separate scores for technical merit and artistic integrity. Notwithstanding the dynamics issue mentioned above, most, if not all, of the songs deserve a "5" for technical merit. But in moving beyond the pure singing to account for interpretation, creativity, mixing (which often shades too far towards the mids and bass), and other intangibles, some songs simply stood out above the rest. Those remained a "5" while the others, for one reason or another, were reduced to a "4".

To be honest, I don't know if there is a barbershop album that I'd consider to be a must-have. But if you're looking to start your barbershop collection, or even fill it out a bit, this is a good addition to any a cappella library.

Tuxedo Junction's self-titled album will not swell the ranks of barbershop fandom, but those already in that camp might just be won over by this group's enjoyable, if cautious, vocal stylings.

Clear voices blend well, and although the odd vibrato doesn't quite match up, Tuxedo Junction succeeds at locking their chords with the best of them. And they somehow manage to evoke a little emotion here and there, not an easy feat in a format whose standard lyrics don't veer far from "Jeepers, creepers, where'd you get those peepers?". Personal favorites include When I Fall in Love and the strangely effective In My Room.

From a production standpoint, I would have preferred a little more bass and a balancing of the lines. When the lead switches on When I Fall In Love, for example, someone didn't tell the producer, and the second solo voice comes out distant and thin.

The last three tracks offer a strangely inadequate finale to the album. Silhouettes is far below the quality (and style) of every other track, Alleluia suffers from on-the-nose Christian lyrics, and Lullaby sounds unbelievably similar to Bring Him Home from Les Miserables. A strange finish to an otherwise respectable album.

Tuxedo Junction's latest album, Tuxedo Junction, combines sweet harmony and traditional barbershop tunes into a solid, enjoyable album. Each of the vocalists on the album has a pleasing, accurate voice. No nasal tenor here: the tenor effortlessly hits high notes with a pure and full sound. The bass is equally effortless in his resonant low notes. Pitch, blend and tempo are the basic necessities of a good a cappella album, and Tuxedo Junction covers all three. The energy of this album is great. There is excitement and emotional punch in the voices of the singers. To me, this is most evident in When I Fall in Love. It is an accomplishment to maintain energy and interest through every song in an album, especially in ballads like the beautiful Beach Boys cover In My Room.

A refreshing moment in the album was when a light, young-sounding soprano joined in with Junction's Lida Rose. With Shirley Jones from The Music Man in mind, I wished for a moment for a richer sound in the soloist. The moment quickly passed.

Groundbreaking and barbershop are not two words that go together. Adding a vocal percussionist and tons of effects would contradict the definition of barbershop. But with Tuxedo Junction's excellent technical abilities, intensity and pleasant sound, I would say they are a cut above standard barbershop albums.

Tuxedo Junction has brought together a very good collection of songs, a fat sound, and championship singing ability for their first album, Tuxedo Junction. Tuxedo Junction is a barbershop quartet hailing from central Texas. They won the 1999 Southwest Quartet Championship, a SPEBSQSA district that is known for champions. This album shows that they are very representative of that championship level.

The first time I listened to the CD, I was enjoying the really wide sound that these guys produce. The arrangements were top notch, with lots of opportunities for lesser musicians to stumble. They succeeded in creating some admirable four-part harmony.

Even though I was really enjoying the group, something nagged at me. What was it? Songs: Tuxedo Junction, Java Jive, Jeepers Creepers, Midnight Rose, Lida Rose....Lida Rose!!!! That's it! These are songs and arrangements sung by some of the biggest quartet champs from the '70s and '80s, with a heavy emphasis on Bluegrass Student Union. That was it. These were songs from the champs, only it wasn't the original foursomes.

Tuxedo Junction had laid out some big shoes to fill. For the most part, they've done it. From the very first notes of the song Tuxedo Junction, the breadth of their sound is of champion quality. It fills all the space between the speakers. They demonstrate a musician's sense of flow and song interpretation — knowing where to sing it by the spots and where to be creative.

When the arrangement calls for someone besides the lead to sing the melodic line, the other three are very capable. John White, the bass, drops a nickel in the Java Jive pot with enviable tone and quality. On When I Fall In Love, bari Joel Bourgeois lays out two bars of beautiful solo that evolves to an even more gorgeous duet with the lead, Bill Wilkinson. Tenor Pete Cogswell uses the same song to demonstrate his ability to step out into spotlight.

As good as they are individually, the members of Tuxedo Junction shine best when singing in a classical barbershop quartet fashion. The listener feels the intensity this group can generate during the song Midnight Rose. Lullaby is probably their best song on the CD, fully utilizing their dynamic range, playing with a sweet set of bell chords, and ultimately making the listener visualize the child with eyes closing.

Anyone who has sung a cappella knows how easy it is to stray from the tonal center. On most of the songs, Tuxedo Junction wanders slightly. While this is not serious enough to make you shelve the CD, it's something they need to work on.

This is a CD I'm glad to have in my collection. With all the great songs, it's one I'll listen to frequently, alongside the original recordings of the great songs.