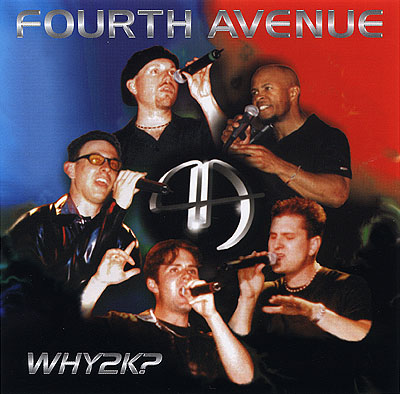 If Rockapella were a street-corner doo-wop group instead of a boy band, they would sound just like Fourth Avenue. Anchored by fabulous percussion, a good groove, and some disarmingly Altman-like solo work, Why2K? is an infectiously good listen.

Fourth Avenue's sound is a little sultrier than Rockapella's, its timbre a little deeper and more resonant. It's also nowhere near as fine-tuned, although it mostly avoids the biggest pitfalls of the authentic street corner sound. And Mo Harris is one helluva drummer, vocal or any other kind.

This record holds together well and sounds like a concert album, unlike those live albums that sound like a collection of cut-n-pasted live greatest hits. The set list flows well, the songs have a fair amount of variety, and the spoken-word intros are well-chosen and for the most part keep things moving forward. The screaming teenagers are a great touch, in keeping with the unretouched, five-guys-live sound.

You can dance to this music, from the dominant motown groove to the jazzy outlier Brother. (Tuning issues keep Ryan Holway's original from true greatness, but it's a great track nonetheless.) There's a great jam-band feel to many of the numbers, which makes bearable the inevitable disco-hit string-along. Land of a Thousand Dances is one of those songs that everyone knows and no one knows the name of. This version ought to rouse even the staunchest cynic.

Fourth Avenue does a terrific job of bottling their live electricity. They deserve to be able to sell it.

I'm not exactly sure how best to approach Fourth Avenue's Why2K?. Treated as a regular a cappella album, with my usual expectations for precision, clarity, energy, sophistication and all-around technically sound singing, this album rates as a "pretty good". On the other hand, when considered more as a demo album — one designed to encourage potential bookers to engage Fourth Avenue for a concert — this album earns far higher marks.

The root cause, I suspect, for my need to make such a distinction lies in the fact that the album was recorded live. Fourth Avenue has done its best to preserve the live concert experience, complete with screaming female audience members, song introductions, and audience participation. Do I really want to hear all this on an album I intend to listen to alone in my living room? No, not really. Am I happy lowering my standards for sound quality and tuning precision since I know the music was recorded live? Again, no. Conversely, would I be psyched to book Fourth Avenue for my local school or community event after hearing Why2K? Most certainly.

Moving past the live nature of the recording, the one musical issue standing between Fourth Avenue creating a kickin', blow-the-roof-off-the-joint sound vs. a merely solid, enjoyable blend is the lack of something in the background tenor vocals. Crispness? Energy? Vitality? Oomph? I can't put my finger on exactly what that something is, but somehow that's where most of their material felt lacking. In Maurice "Mo" Harris, the group has a solid backbeat vocal percussionist — not perhaps as subtle or sophisticated as a Jeff Thatcher or Wes Carroll, but able to create a heavy, driving force behind every song. The bass, Jim Brown, has just the right balance of power and feel in his rhythmic bass lines. And frankly, when any of the remaining three guys (two tenors and a baritone) take a solo, they sound fine. But somehow, when relegated to singing interior background lines, there is a palpable lack of zip which detracts from otherwise well-conceived arrangements.

A check of Fourth Avenue's website and the album's liner notes lets us know that this album is actually the group's second and that recent years have brought the group exposure via the CARAs and The Harmony Sweepstakes. Still, it seems that most of their live concerts are centered in the Ohio area. This album should certainly help them get new exposure in other areas of the country. But as for making a purchase, I'd wait until the guys get back into the studio to get an idea of what they really can do.

First of all, kudos to Fourth Avenue for taking their talents and the art of a cappella into our high schools. These guys deserve the praise they get, and Why2K? is proof. It was actually recorded, screaming fans and all, at a tribute concert honoring Fourth Avenue as the most popular high school act in their area.

Fourth Avenue courageously foregoes an all-cover set list (a safer bet with a high school crowd), and successfully presents some original material, including the Weird-Al-ish Psycho Chick and the catchy opener Gettin' My Groove On.

As a testament to Fourth Avenue's outreach efforts, and as a souvenir for its audience, this album is an unqualified success. Standing alone, however, the flaws come out, and as a recording the album is far less successful.

Most annoying is the wonky tuning, especially on Joy to the World, with its repeated harmony that wasn't once in tune. Rhythmic integrity was similarly lacking, despite some impressive vocal percussion from Maurice "Mo" Harris; the tempo ebbed and flowed on nearly every track. Granted, Why2K? is a live album, and I'd be far less critical if I were listening from a seat in the audience. But a performance put on CD for all to hear demands a higher musical quality than Fourth Avenue was able to muster at this particular show.

Take a pass on this particular effort and wait for the studio album.

CD's can be purchased at shows, or online from the following sites:

or at the following locations:
×