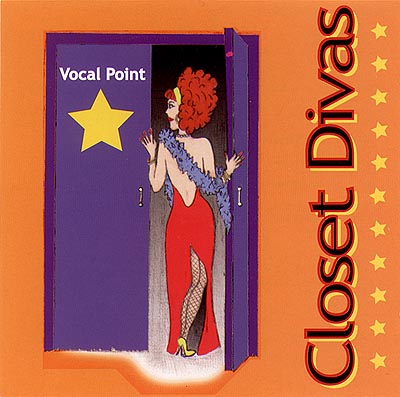 The cover of Closet Divas is a cartoon drawing of a slinky lady in fishnets, heels and a feather boa. That fits the music, which is more reminiscent of a girl at a high school costume party than the aging starlet who would wear that outfit for real.

Closet Divas does best on the songs that are supposed to have a high school-girl sound, like Natalie Imbruglia's Torn or Janet Jackson's Together Again. There's a lovely version of Everything But the Girl's We Walk the Same Line. Most everything else sounds like it came out of an overly earnest choir, or maybe a musical theater workshop. So much expression! So much heart! And just not the right sound, not for the music they are trying to do. They have a sound tailor-made for doo-wop, or a Sweet Adelines-style show choir. When they start throwing themselves into Buffalo Springfield or Curtis Mayfield, I'm torn between wanting to avert my eyes and wanting to give them a standing ovation in the spirit of a high school talent show.

Somehow, I suspect neither of those is the desired response.

There's just a mismatch somewhere, and I couldn't tell you if it's song selection, talent, attitude or just a lack of proper coaching. I bet these women all read music pretty well, all get good grades, and all have good enough voices to sing solos in the college choir. Those are not skills to be sneezed at. It's just that there's a mismatch with about half their group's repertoire, like all those soul-free Scottish bands in love with Otis Redding covers. The snippet selection on the last twelve tracks only adds to the school talent show atmosphere.

The Vocal Point on Closet Divas sounds too innocent to sing the blues, too inexperienced to sing about seduction and really mean it. But they have sweet voices and a lot of feeling, and turn in nice performances when they tackle songs that are the right size for them. They're just not quite grown into their fishnets.

That old bugaboo of female a cappella rears its ugly head once again on Vocal Point's latest album, Closet Divas.

What I'm talking about is more prejudice than fact: the idea that female groups lack body, depth, and resonance, and that their ability to cover bass-heavy contemporary a cappella songs effectively falls short of their male and mixed group counterparts.

I say prejudice because the issue has long been laid to rest with groups like the Tufts Jackson Jills and the USC Sirens combining jaw-dropping alto ability with savvy production to create tracks with enough punch to compete with the best male and mixed groups out there.

But Vocal Point's latest effort doesn't follow suit, and only confirms the prejudices of years past. Despite strong singing and arranging, the album sounds thin and listless, even with a full thirteen members in the current group.

The lack of depth doesn't completely sink the album, however. Strong vocals include Jean Massimo covering Joni Mitchell on A Case of You, Nicole Zakak on At This Point in My Life (Tracy Chapman's songs can be elusive, but Zakak finds the groove), and Amy Beckhusen on We Walk the Same Line by an artist named Tracy Thorn. Arrangements stay simple, with Hot Fun in the Summertime and Tears of a Clown highlighting the instances when that simplicity works well.

I would be remiss not to mention the Divas Medley, but since my esteemed colleagues will likely remark at some length, I will add only this: the excitement of a well-arranged medley lies in the beauty of the unexpected — those transitions of style and key that take us from song to song. Indeed, often those transitions matter more than the songs themselves. Cutting the songs up, as was done on Closet Divas, removes the medley's entire raison d'être. That being said, there are lots of pop music medleys out there in a cappella-land, and I have yet to hear one that actually, truly works (The Harvard Opportunes' Let the Music Play comes closest).

Vocal Point has chosen a tricky slice of the a cappella spectrum — female groups covering contemporary songs, bass lines and all. But other groups have done just fine there. Vocal Point has the talent. Now it's time for them to step up and do justice to the kind of music they've chosen to sing.

On Closet Divas, the University of Rochester a cappella group Vocal Point has two major problems. First, they sing flat on most, if not all, of the cuts. Second, the production quality and form of the album add to the first problem. The good news is that they generate a reasonably high level of energy that overcomes some of the problems.

As I began listening to the album, my ears picked up consistently flat singing. Sometimes they sang notes just a shade under the pitch. At other times, the flatness of a singer or section of singers was very noticeable. The longer I listened to the CD, the more it became apparent that tuning was a major problem for the background singers, for the soloists, and for the duet singers. There are many ways to fix this issue. It's a shame that they did not do so before issuing the CD.

Some readers will say I am being picky about this next point: the Diva Medley is not a medley and is sliced into 13 distinct tracks on the CD.  The length of the medley-ettes range from 35 seconds to 78 seconds.  None can stand on their own — i.e., there is not an intro, or a tag to the songs.  Each cut only contains a verse or chorus which, by any standard, is too short.

Prior to creating the recording, these 13 tracks were a medley.  Vocal Point used it as the opening number for their spring show. It actually had transitions between the tunes.  Each member of Vocal Point sang one of the solos. When it came time to record, they dropped the inter-tune modulations.  They felt by putting each tune on a track, it gave the listener easier access to the cuts that the listener wanted to hear.  Yeah, but .... I really would have liked to hear what the full medley sounded like.

In the area of sound/production, there were several problems noted on the CD.  The most obvious was the incorrect volume relationships between the sections of Vocal Point.  On many songs, the  background voices were too loud or the soloist was buried behind everyone else.  Being able to hear the melodic line is very important.  Equally important is hearing just enough background audio (singers, vocal percussion, etc.) to blend with the soloist.  Deciding how much of each part  is "just enough" is one of the keys to a good final mix of any CD.  This has nothing to do with the group's singing ability, but they should make sure the recorded results reflect their best work.

I can hear y'all saying, "What a curmudgeon this guy is!". To which I say, in spite of the above comments, some of the songs were performed very well. Cut 4, Will You Still Love Me Tomorrow, has a lovely soloist, lots of great energy, and is well sung. Although the whistling is flat, cut 14, Tears of a Clown, is really good and enjoyable. Even the "medley" had its moments. Madonna's Express Yourself, the very short Candy, and Shania Twain's Feel Like a Woman were sung very well by all the participants.

I hope the ladies of Vocal Point retain a little more control over the final results of their next CD. The objective should not be to finish recording the last song. If you wish to have your family, friends, and admirers listen for many years, the objective must be to lay down the first song exactly as you want it. Then, you can move on to the next song and do the same for it. Finally, you will finish a quality CD. You have the voices to do it. Best of luck.