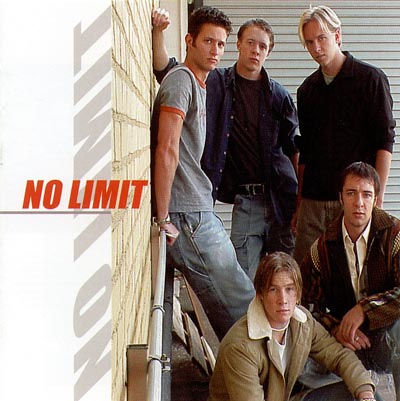 True/False: What this world really needs is another talented, adorable boy band, ready to take over the airwaves with the help of a few talented producers.

Judging by U.S. music sales, the answer is clearly yes, and I'd say No Limit has a decent shot. I suspect this is almost entirely due to the Herculean efforts of producer Jeff Thacher, who is the hands-down MVP of this disc. The production is gorgeous, especially on the opening and closing cuts, the dance-lite of All of My Love and the very catchy True Lies. Thacher gets a little help from a pretty falsetto tenor, the only memorable soloist, but otherwise this disc is a production triumph. It certainly doesn't get much help from the lyrics. Sample: "You say that you don't want me/but I know it's not true/so why you always on me/when it's not what you wanna do."

The one thing that gives me pause is that the boys of No Limit can't consistently nail a chord. This may be because of their heartfelt strained breathiness (a genre requirement) or it may be in part because they aren't very good musicians, or it may be something else entirely. But when you have production this good, there shouldn't be any missed chords anywhere. When there are as many almosts as you have here — particularly in the flyover songs in the middle of the disc — it makes me suspect that all of the really good tuning is entirely due to the producer, not the singers. This may be a winning formula in the pop music world, but in the a cappella miniverse, it's gonna cost you points.

Another caveat is the lack of a bass presence. Even with the sterling production assistance, the bass sounds like his voice has just changed, not like the kind of guy who can hold down a really great sound. (Actually, my analogy may not be too far off — judging by the pictures in the liner notes, group director and lyricist Luke Adsit is the only one with a fighting chance of buying a drink without a fake ID and an inside track with the bar staff.)

But really, No Limit is a nice little boy group, with the skater-punk heartthrob looks and sound to lure many a fan in their demographic. For Jeff Thacher's sake, I'm totally pulling for them.

If imitation is the sincerest form of flattery, then the guys of Rockapella should be quite flattered. If only this were a better imitation.

Whether intended or not, the five young men (from late teens to early twenties) of No Limit make no secret of their desire to be viewed as a Rockapella-in-the-making: from enlisting the help of Jeff Thacher to produce, record and mix their album, to the blond Scott Leonard-like 'do sported by one of the group's high tenors, A.J. Moen, to their "in-depth" website bios where three of the five cite Rockapella as a defining musical influence. News flash: Guys, you've got a ways to go.

OK, so it's not entirely fair to compare a group of well-meaning young singers to a group which has been at the very top of the a cappella singing world for over a decade. But as I listen to No Limit's self-titled second CD of six songs, all original, I can't help but feel that these guys are asking for it. Understand that I'm hardly the world's biggest Rockapella fan, especially since Sean Altman's departure, but like 'em or not, Rockapella is an exciting, energetic, tight, crisp, harmonically and rhythmically sophisticated ensemble. These guys...well...not so much.

First off there's the music which, for lack of a better word, falls under the category of teen pop. The songs are virtually indistinguishable from one another, typically relying on very basic and predictable chord patterns. The verses and the choruses are themselves often hard to tell apart, an unfortunate fact not helped by the first, second and fifth songs, which actually begin with the chorus.

Then there are the lyrics, which primarily consist of monosyllabic rhymes — or sometimes even false rhymes — that have a children's-book simplicity about them (and that's not a compliment). "Past" and "last", "will" and "still", "bad" and "sad", "see" "me" and "be" — pairings that would make even Dr. Seuss cringe. And with the possible exception of Hold Off the Rain, which at least dabbles in similes, check out Da Vinci's Notebook's classic parody Title of the Song and you'll basically have heard the other five on this album.

Next, there is the performance of said music. Now, bad music performed brilliantly is still bad music, so these guys were pretty much doomed in my book. And in all honesty, there can be no question that all of these guys can in fact sing, and well. But that said, no matter how much they all want to be Scott Leonard, they're not there yet, and the vocal gymnastics the soloists do attempt become repetitious and unimpressive. What's more, there is an energy that is noticeably lacking in the accompanying vocals — a "pop" or a crispness in the attack on each note, or an energetic pulse in the long sustained background chords, which could have at least enlivened the listening experience for me. The varying amounts of reverb, chorusing, and other effects employed by the engineer can't hide the fact that the singing is almost "too cool" — so relaxed that it's relatively uninteresting.

I know there is a group of people out there who might hear this album and think I'm nuts. After all, No Limit has fashioned a recording which is indeed suitable to be played on most Top-40 radio stations around the country. It's classic bubble-gum pop, albeit perhaps of a B-grade level. It has all the vapid lyrics, musical hooks, and boring backbeat that one has come to expect of the lesser boy bands. What it lacks is virtuosic singing, dynamic performance, compositional sophistication and a certain, unquantifiable flair.

But if you — or more likely your teenage child — like this sort of thing, knock yourself out.

With the six tracks on their self-titled sophomore CD, the five young men of No Limit deliver a technically strong performance, but one held back by their songwriting and soloing. Great engineering, mostly tight tuning, and solid percussion carry the CD, so that it sounds pretty good as long as you don't pay too much attention to it.

All six songs are originals, penned by the group's director, Luke Adsit, and his collaborators. While it's great to hear a CD full of originals, these unfortunately lack substance. The lyrics are cliche' and simplistic, failing to delve to a deeper level. Lines like "Storms can be good, but in the heart they leave pain" and "Seeing each star as a memory of you and I" leave me cold with their amateurish stabs at generic themes. As for the songwriting itself...well, have you ever heard Da Vinci's Notebook's parody of formulaic boy-band ballads, Title of the Song? It might as well be the songs on this disc that they had in mind. An exception is All My Love, which has well-layered melodies in the chorus and a good driving beat throughout.

Soloing, too, is a weak part of the album. More often than not, tuning issues are due to the leads. They also attempt pop acrobatics that they just don't have the voice control to pull off yet. For example, the peak of True Lies falls flat when the soloist starts struggling to wail, and the verses of All My Love are sloppy on the 16th-note figures. Even in the background, the moving runs need to be tightened up. They have good voices, but there are definite weaknesses that could be coached out with some time and effort.

That being said, there is promise on the disc. The arrangements are interesting and well sung with great energy. Jeff Thacher's production is slick and smooth, and the percussion is strong and artfully layered, although the percussionist isn't credited. If they learn to take their lyrics and songwriting to a deeper, less-generic level, and develop their soloing abilities more, they stand a chance of going places. A lot of the groundwork is there.

For ordering information, visit No Limit's web site, or look for it at Mainely A Cappella and Primarily A Cappella.