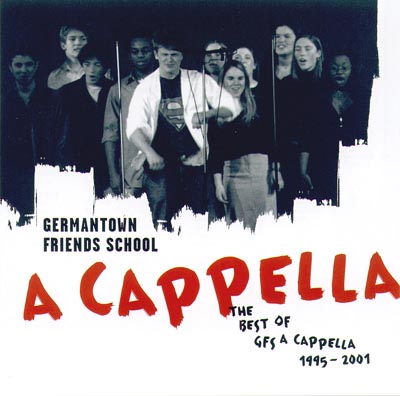 This album is an inspiration to anybody who sings in, directs, or wants to start a high school a cappella group. Not only is most of it pretty darn decent, it shows a tradition of continuous strength that covers a mind-boggling seven-year period. There are a lot of college groups out there that can't put together such a win streak, even if you cherrypick the best stuff.

Most of this stuff is about the caliber of an average college group that shows flashes of brilliance. That may not sound like much, but anyone who's been around a cappella for a while knows that high school groups are rarely out of the bottom tenth of the vocal group universe. Most high school groups are high on enthusiasm, low on tuning, with voices that still crackle and whisper in their newly acquired registers.

The kids of Germantown Friends don't fall prey to either of those stereotypes, which to me suggests excellent direction and a helluva talent pool. The tuning is quite acceptable and sounds like it was acquired naturally, not through overzealous production. The solos are all plausible, and in a few cases, really pretty good. Mike Terry's Land of Confusion and Kelly Bixby's MLK stand out as the best of the lot — I'd be proud to have either of them singing in just about any group I could think of, from high school up to post-college singing for money.

The arrangements are pretty nifty too, a cut above your basic do-it-yourself start-up college group. This suggests to me that music teacher/director Dave Buffum has good chops and an exhaustive network of friends and colleagues willing to help out (including CoCoBeaux/Metronomes star Garth Ross and Jon Ryan from Ball in the House). There's so much variety in this disc, of both voices and arrangements, that the 21 tracks don't start to wear you down halfway through. Some cuts are all male, some are all female, some coed. No one arranger seems to have a monopoly on contributions. That kind of breadth is astonishing.

If you have any connection at all to high school a cappella, buy this disc to see just what a good group is capable of. And if you're in college, buy one too so you can get a good look at the next generation running up behind you.

Philadelphia's reputation as a hotbed of contemporary a cappella extends into the high school realm with the release of the Germantown Friends School's Best of GFS A Cappella.

Showcasing surprisingly mature soloists and some fantastic repertoire, this mostly live (and live-in-concert) album represents almost six years of male and female a cappella under the tutelage of David Buffum, with the occasional coed effort featuring both groups together.

The singers display a rhythmic integrity that's rare for their age group, with only a few songs revealing quickening tempos at the chorus or breakdown. What's more impressive is that studio work appears on only a third of the tracks, and even those tracks sound like not a lot of cheating went on. It's impressive, but truth be told, I would love to hear GFS with some high-tech studio wizardry (maybe using Off the Beat's engineer...?) behind them.

I have to mention, too, that I was pleased to see Buffum's choice to make two separate groups at GFS, male and female. Most choral programs have an "advanced" mixed group and an "intermediate" women's choir, an arrangement which usually shortchanges the women (as the men are almost always less developed musically and socially, and sometimes are so rare and desirable they don't even have to audition). I have no doubt that the men are hilarious and get screams at concerts, but the women's tracks are more enjoyable, with better intonation — I just wish their soloists would tear into the songs the way the male soloists do (check out the energy on Bring It to Me and Change in My Life).

The quintessential yearbook album, The Best of GFS A Cappella represents tracks from six years of prep-schoolers at Germantown Friends, including the Bufftones (all boys), Double Treble (all girls), and multiple tracks where they join forces. The Bufftones tend to deliver nice energy in their tracks, while Double Treble leans towards sop-heavy, classical-sounding chords. The latter can produce beautiful work with a strong solo (U2's MLK) or monotony (Beatles' Because).

In general, the single-sex songs tend to be stronger than the coed attempts, where the large-group sound (nearly 25 people at times!) seems to overwhelm the singers and accentuate their problems with tuning and unison rhythm. Many of the tracks here were recorded live, producing a nice blend, but making the album's ubiquitous pitch problems that much more apparent. Lack of vocal control presents itself on most of the solos and almost all the blocks, leading to large tuning issues that sink blocks, tracks, and ultimately the album.

It is a rare song where the GFSers (and many college groups) are able to pull together tuning, energy, and a strong solo. For instance, Scott Cope turns in some really impressive riffs on tracks 2 and 20, but out-of-tune blocks drag the overall impression of the tracks downwards. Vincent achieves some dramatic moments, but little pitch problems in both block and solo prevent it from reaching the new level. In addition, the sheer volume of music here (21 tracks) leaves the listener pretty tired by the end; the sum total becomes far less than the parts. Standouts like the Bonnie Raitt closer, with strong block singing and an inventive trio approach to the first verse, lose their power when surrounded by more average contributions.

It pains me to give the enthusiastic singers of GFS these scores, especially when they are above the bar for high school choruses (but not reaching the baseline necessary for the average listener). They sound like they both enjoy and care about the music they're putting out. That's a vibe that many more technically proficient groups out there aren't able to capture on slicker albums than this "Best of" collection. I also appreciated the eclectic repertoire. With fewer tracks and more focus on tuning, GFS could put out something really special the next time around.