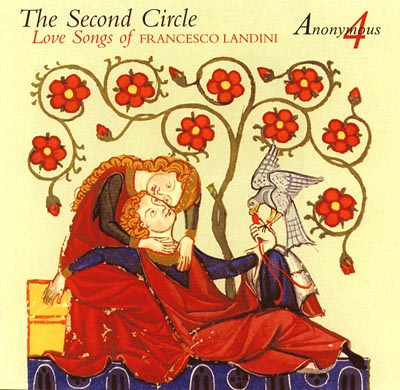 What an incredible pleasure to review an album so exquisitely sung, tastefully noted, and beautifully packaged as Harmonia Mundi's latest release from the inimitable Anonymous 4.

This album focuses on the work of one Francesco Landini, a blind, 14th-century Italian composer. The seventeen love songs that comprise the album might seem like overkill — wouldn't an album of Medieval Italian love songs generally have been a little more accessible? — but the tracks are nicely contextualized by Susan Hellauer's brief but thorough liner notes. It is also exciting to hear the evolution and variety in the work of a single composer, much like the popular albums of today.

Anonymous 4 once again reaffirms their reputation as one of the top vocal groups singing early music today. Don't pass this one up as a boutique album — put it on, read a little about it, and you may be surprised at what you hear.

Seven hundred years of love songs haven't rendered these Italian ballate obsolete. We may no longer believe that unchaste lovers will be condemned to spend eternity in Dante's Second Circle of Hell. But as sung by the women of Anonymous 4, the two- and three-part ballads by his contemporary Francesco Landini are as lovely and as lively as they must have seemed back in the 14th century.

While the material is enjoyable, it's technical achievement that distinguishes this disc. The RARB five-point scale just wasn't designed to measure tuning at this level. The crisp-yet-natural diction, perfect octaves, and unified vowels practically brought a tear to this choir dork's eye. Hearing four voices melt into one for the final breathtaking unison of track 18 will do the same for the less obsessive.

I do have one small criticism. On the tracks which feature only two or three members of the group, the alto tends to overbalance. This is especially noticeable on tracks 6 through 9, where a slight buzzing tone from the alto sticks out in contrast to the smooth, floating soprano.

My only caveat is that the tracks don't vary much; the most significant differences among them are details like untexted vocal lines and contrasts of tempo. Even if a chord is beautiful, it can get tiresome after it pops up in ten or twelve consecutive songs. But if you're looking for early polyphony, beautifully sung, Anonymous 4 is a great choice.

Anonymous 4's The Second Circle: Love Songs of Francesco Landini is a beautiful professional recording of what I might call "museum music". That is, music I'd like to have playing on headphones while walking around a museum or, better yet, while sitting in the sun in the museum's courtyard, enjoying and reflecting. It is an album of love songs from 14th-century Italy, all in two or three parts. There are no catchy melodies, but there's a whole lot of beautiful counterpoint, rich harmonies, and wonderfully controlled singing.

While I am not able to comment on the stylistic accuracy of their interpretations, I can say that it sure sounds appropriate given the texts. Lilting melodies ebb and flow like waves on the shore, gently rising and subsiding, with the supporting texture flowing just as smoothly. Sometimes there is a clear melody with accompaniment from the voices underneath (Non dò la colp' a te, for example), but more often all voices contribute to the motion. Some songs have a more upbeat, dance-like feel (Echo la primavera is a fitting example, as the text describes the joy of life and love that comes with the spring), although most have a more reflective tone, sometimes evoking contentment, sometimes longing, and sometimes just pure and simple beauty.

While there are four women in Anonymous 4, most tracks feature only two or three of them at once. Susan Hellauer always supplies the soprano melody line, with enormous vocal control and bell-like clarity. The other voices enhance her tone wonderfully, sometimes blending seamlessly, and sometimes adding a color of tone amazingly reminiscent of a muted string instrument, like a viola de gamba. Most of the time I notice this coming from Jacqueline Horner, although Marsha Genesky and Johanna Maria Rose each evoke a similar timbre when singing lower accompanying lines.

It's tough for me to give scores for energy/intensity (they give what is called for), innovation/creativity (they're trying to remain faithful to 700-year old art), and to soloists. Regardless, this is some beautiful music. The tuning is impeccable, the musicality entrancing, and the recording is clean and clear. If you're in the market for a disc like this, you won't be disappointed picking it up.