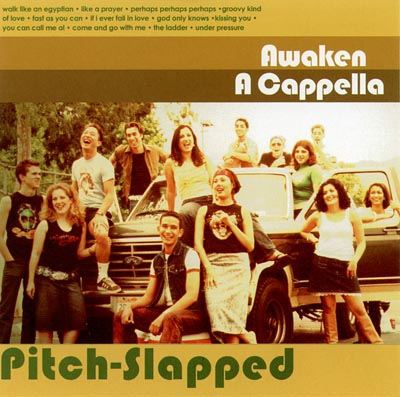 OK, so I'll admit I was excited. A co-ed a cappella group from Southern California (a recent hotbed of quality a cappella), in its ninth year (so it's had time to mature), releasing its 3rd CD, featuring a wide variety of repertoire, mixed and mastered by Gabriel Mann. Who could ask for anything more?

Unfortunately, I suspect you will if you check out UCLA Awaken A Cappella's Pitch-Slapped, a polished, ambitious effort which starts strong but fades significantly as it goes along.

The opening two tracks are rock solid and very much raised my hopes that the rest of the album could match this stellar beginning. Both tracks feature a seemingly dance-club-influenced bed of processed basses and vocal percussion, over which is laid a rather simple but nevertheless effective background vocal arrangement and solos. You may have your personal quibbles — the mezzos/altos sound a little lifeless in their background on Walk Like an Egyptian and some of the interpretive liberties taken in Like a Prayer may not suit you — but the arrangements work, they are well-rendered, and overall, they engage and entertain the listener.

With Perhaps Perhaps Perhaps, the group takes one of several diversions into vocal jazz which, while within their abilities, is not their strongest suit. Also evident on certain later, less "rock n' roll" tracks, the blend wavers at times, scattered pitchiness in the tenors and altos is noticeable, and enunciation in group solos could use some tightening. These are followed by an all-too-cheesy rendition of Groovy Kind of Love, whose first two minutes sound like they should be aired over the closing credits to a Disney movie.

Back on track they go with a very creative and interesting take on Fiona Apple's Fast as You Can and a predominantly male rendition of Shai's If I Ever Fall in Love, arranged and performed wonderfully by John Torres with a wink to Boyz II Men. But they derail again on a pitchy and ultimately boring rendition of God Only Knows by the Beach Boys, followed by a richly chordal but ultimately mind-numbing version of Kissing You by Des'ree.

And so it goes...one or two solid tracks followed by one or two that leave me disappointed. Mind you, none of it is in any way bad — but when you've seen what a group can do, it's frustrating to see them frequently NOT do it.

Perhaps some explanation can be found on the group's website which, in the "About" section includes the following remark:

Eschewing any description as a "choir," "chorus," "chorale," or "choral group" — terms that usually invoke the staid image of massed singers standing reverently on choral risers in flowing robes — the members of Awaken prefer to describe the musical group simply as "a UCLA student vocal ensemble".

Most songs performed by the group are original Awaken arrangements and go beyond the boundaries of traditional a cappella music. In fact many of the member in the group refer to themselves as "the a cappella group that hates a cappella music".

So for Awaken, there appears to be a definitive intent to mix up the repertoire as well as a push toward non-traditional interpretation and performance of said repertoire. With that in mind, the forays into vocal jazz make a bit more sense and some of the very original, but to my ear unsuccessful, stylistic choices in sections of certain songs (part of You Can Call Me Al comes to mind) might be better understood in the context of this agenda.

But ultimately, the entertainment value is more important than the philosophy, and in that regard, Pitch-Slapped falls just a little bit short. It's enjoyable in the moment but doesn't leave me with that urge to keep it in the CD changer. For what it's worth, I'm definitely excited to hear more from Awaken, but this one doesn't do it for me.

UCLA Awaken's latest album, Pitch-Slapped is a solid production deserving of its CARA 2002 nominations for Best Mixed Collegiate Album, Song (The Ladder), and Arrangement (Fast as You Can), as well as its track on BOCA 2002 (Walk Like an Egyptian). Perhaps the reason they were not nominated in the soloist category is because many of the tracks switch soloist from verse to chorus to verse. More on this later.

This album ranges from oldies-but-goodies to pop and '80s hits. In an interesting decision, the album includes one guys' track (If I Ever Fall in Love) and one girls' track (CARA-nominated The Ladder). Awaken demonstrates that they can hack it as a female or male group — and they are more than adequate as a mixed group.

The artwork is very stylish and just plain cool. Their album screams "we are not a dorky, cheesy a cappella group", and Awaken definitely gets the point across.

The tracks range from good to dazzling. Some of the song choices could have been different. Groovy Kind of Love, which is just a dull song whether a cappella or not, precedes the dynamic Fast as You Can. A slightly messy You Can Call Me Al is soon followed by a fantastic rendition of Under Pressure. Will Heermance gives a great performance, soaring to the highest of high notes with ease.

Gabe Rutman, who was recently nominated for a 2002 "Artist of the Year" CARA (for producing so many top-notch albums), lent his engineering and production skills to the making of Pitch-Slapped. On the whole, this album was nearly flawlessly produced. The effects weren't overpowering; the mixing was great. However, there were a few decisions I disagreed with.

First, the soloist's voice was doubled on the opening of Kissing You. This sounded odd because her vibrato on each track was different, and her cut-offs didn't overlap perfectly. It would have been much better to keep her solo a solo. Second, on many of the tracks the soloist doesn't sound like he/she is in the forefront of the song.

This is a tiny thing, but something I think would make Awaken's next album even better. The Awaken women have a tendency toward vibrato, which isn't great for block a cappella singing. Straight tones blend the best. Leave your training behind, ladies. I know it's hard!

I'm sure you were wondering when I was going to get to the "more on this later" part of the review. On their next album, Awaken needs to choose one soloist per song. I understand Awaken's desire to showcase all their soloists — who are all very good — but it disrupts the cohesive nature of the song. It is distracting. It also keeps them from a sweep of nominations in the CARAs.

But please don't let my criticisms keep you from buying this album. The things I mentioned are fine tunings for a superb a cappella group on their next production. Great job, Awaken!

Collegiate a cappella has finally caught on in Southern California. The north picked it up a good bit earlier, but now top-rate groups are springing up all around the southland. Out of UCLA comes one of these: Awaken A Cappella. With their latest album, Pitch-Slapped, they clearly show they're a group to keep an eye on, although they still have some distance to travel.

Their sound is different from the Off the Beat-wannabes out there. Some of their arrangements are more reminiscent of '80s collegiate doombada a cappella, sung with skill and charm, but much of the time they manage to spice these up. Perhaps Perhaps Perhaps has a nice dual scat section, Come and Go With Me has some scat and a great trumpet solo, and You Can Call Me Al has an intriguing modal shift in the bridge. Having multiple soloists per track also mixes things up a bunch; only 5 of the 12 tracks have a single soloist. While this is occasionally distracting, it DOES manage to add a new dimension to the done-to-death Like a Prayer, and that's not an easy task. Their experiments with men-only and women-only tracks (If I Ever Fall In Love and The Ladder), while not the strongest tracks on the disc, are proof positive of their desire to keep things exciting and new.

Their forays into more "modern" sounding tunes work well, too. Walk Like an Egyptian and Fast as You Can benefit from solid, driving percussion and tighter, more obvious production, although they went overboard with the bass enhancement in Fast as You Can.

The soloing on the disc is pretty good. I'm rarely blown away, but rarely does someone solo for long enough to really have a full opportunity to do so. Sarah Ziemba is worth noting, though, as she does a wonderful job with Des'ree's Kissing You, one of her several turns on the disc.

But there's still room for improvement. Tuning isn't always solid, and there are even occasional wrong notes (sometimes arranging faults). One person (I'm almost positive it's the same one throughout the track) inhales with amazing volume consistently through Kissing You. Most importantly, they need to loosen up sometimes and rock less self-consciously. Most noticeably in Under Pressure, the group feels too careful and polite, missing the all-out, balls-to-the-wall wailing that is required of them. And they should have put the unfunny hidden studio antics (all four worthless seconds of it) on its own track instead of attaching it (and an introductory minute of silence) to Under Pressure, if they insisted on including it at all.

I haven't even mentioned the insert design yet! This is '70s style at its finest, complete with a parking lot barbecue, Tab, do-rags and Greg Brady belts. Even if the music didn't make this a worthwhile purchase, the insert would.

Available from Mainely A Cappella.