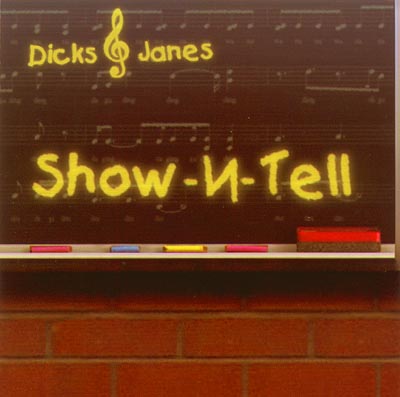 Such lovely soloists in the Michigan Dicks and Janes, a coed group I had never heard of until this disk showed up in the mail. Apparently they have been around three years, recording a little bit every year and saving up for this, their debut recording. It's a dandy.

The singing on this album is terrific, that's really the crux of it. They pick repertoire that suits them and they sing it well. There's a certain uniform sound to the soloists, like they studied in the same music department with an eye toward Broadway. Strong voices, more than a hint of vibrato, earnest and enunciated throughout. This means they all sound great, but there are no Janis Joplins or Mick Jaggers here — these folks are higher on technique than on soul. This trained musicality also gives them a great blend, pretty good tuning and strong arranging skills.

Song-wise, most D&J repertoire falls into two groups: good material sung well, and bad material sung well enough to overcome its inherent lousiness. An example of the first group is Blood of Eden, a song I never get tired of and which gets a beautiful treatment here with Mike Yuen's heartfelt solo. Tonight and the Rest of My Life is the poster child for the second camp, a dreadful song that soloist Aimee Austria does her level best to breathe life into. Here's a song with no dramatic or melodic range, that's basically sung on one note and is far more annoying than it is catchy, and there's Aimee, singing her heart out trying to get me to care anyway. She made me pay attention, and her skill should not go unnoticed.

Everywhere is my favorite track, a lighthearted number sung lightly and cleanly by Christy Lombardi. Private Emotion, in contrast, was a song that did nothing for me, but Andy Sievers sang the hell out of it and earned my respect. Clearly this group has a line on where to get the best tenors — if they keep this up, they should be able to make millions on the black market. They even have stealth star tenors; amid a fuzzy and less ear-catching turn on Everything You Want, soloist Josh Bueller suddenly takes a sharp turn toward the bridge and delivers this incredible clear tone that took my breath away. His light-and-fuzzy routine is certainly pleasant, but when he gets going...wow. Here's a guy with a future. On this disc, we also get to listen to him scat on Trashin' the Camp, a joyful little Disney vamp that I think is supposed to be a latter-day Zip-a-dee Doo Da, bluebirds on shoulders and all.

All of the arrangements are strong, a remarkable achievement for any group, let alone a start-up. The vocal percussion is subtle but well done, and it always sounds good whenever it comes to the fore. Sure, there are a few things that could have been better. Galileo, with another Aimee Austria solo, is heavy-handed and needs a lighter touch, but it's got some nice moments in the background accents. Babylon has a great background and arrangement, but also needed a lighter, more forward-moving touch, and Stay, the only live number on the disc, has pretty sloppy tuning; it's jarring after such a tight, polished set of tunes. Also, the Dicks and Janes don't quite have the ensemble tightness of the very best groups, which can transcend the choir format and head entirely into the pop arena.

This album was a delight, despite its unprepossessing packaging and song list. I suspect I won't be the only one who liked it.

There's something very...hmm...what's the word...timely? about reviewing the first CD issued by the University of Michigan Dicks & Janes, entitled Show-N-Tell right about now. No doubt by now you're aware of how quickly Michigan has staked its claim to being a new, abundant source of quality collegiate a cappella. And it's not just Amazin' Blue anymore. Michigan's Compulsive Lyres just took first place in the ICCA and the aforementioned Dicks & Janes are not far behind — but, at least based on this CD, they are still behind.

Recorded over the group's first 2.5 years or so, Show-N-Tell is actually something of a primer for what to do and what not to do in creating a new group and recording a CD. To their credit, the Dicks & Janes have a collection of talented singers who create a wonderful ensemble sound. The soloists, while shading a bit too much toward a trained, pure sound even on the grittier fare, are nevertheless spot-on pitch-wise and generally a pleasure to hear. But there are newbie mistakes as well: rather basic arrangements (with a few exceptions) which fall back too often on long block chords (oh's and ah's abound); a lack of energy and enthusiasm in the backgrounds which saps the groove out of the very few upbeat tunes the group chooses to sing in the first place; and a CD order which leads with two near-ballads, thereby failing to engage the listener from the get-go.

Now here's where it gets even more interesting. Remember the Lyres who won the ICCA? Well, their MD is none other than the lately-oft-under-fire Mark Suprenant (see RMAC for more on this subject), who had his humble beginnings as a member of the Dicks & Janes and whose work is featured prominently on this CD. It's fascinating to me because clearly Suprenant has grown as an arranger and hearing his contributions to this album — a Walking in Memphis which falls flat due to a tame solo and ineffective replication of the opening piano riff; a 7 minute, 28 second Blood of Eden which, while pretty, feels longer than War and Peace; and a Galileo which is so close, but just misses — give me an even greater appreciation for how far he has come.

Fortunately for the Dicks & Janes, they have another equally talented arranger in Clark Haynes, who has given the CD its two best tracks: a rockin', full-throated version of Vertical Horizon's Everything You Want (deservedly included on BOCA 2002) and a perfectly realized take on David Gray's Babylon. Also on the plus side for the group is their recording studio and engineers, who have managed to let a new group use vocal processing and special effects without getting carried away, and who almost always give the group a full, rich blend. My only quibbles are an occasional solo placed a bit too far back in the mix, and the lack of a pronounced drum backbeat in a few places.

It would be an understatement to say that a cappella is alive and well at the University of Michigan, and the Dicks & Janes have turned in a solid effort which will only enhance the school's a cappella reputation. The D&J's may not yet have joined the uppermost echelon of collegiate a cappella groups, but they're well on their way. You might want to pick up this CD so you can say you "knew them when".

Show-N-Tell, the debut CD from the Dicks and Janes, is a wonderful first CD that shows a lot of promise. Recorded over two years, the disc shows the group's cooperative musicality and increasing comfort in the studio.

The sound is tight and smooth. The group has a talent for infusing slower, contemplative songs with forward energy, which is often lacking in collegiate a cappella recordings. The CD begins with one such mellow tune, Tonight and the Rest of My Life, with an ethereal background and a beautiful solo by Aimee Austria (the standout solo of the CD). Rather than starting the CD with an upbeat bang, they start confidently on a more melancholy note. It works well for them, and sets you up for the rest of the CD, which doesn't have too many upbeat tracks.

In fact, you don't hit a more danceable tune until track 3, which is a dynamic, head-bopping cover of Michelle Branch's Everywhere. With the exception of that track and Trashin' the Camp from Disney's Tarzan (and Galileo, if you want to consider that upbeat), the whole disc stays on the slow side. Given their strength with material like this, it makes sense and works well. This is not one of my complaints with the disc.

My biggest complaint is that it sounds too clean, too musical-theater. While the soloists are quite strong vocally (lots of guys with lots of notes!), their diction is a little too clean, their notes a little too exact. I'd be a lot more impressed with the disc if the leads would loosen up more, and be willing to lose a bit of the spit and polish for more engagement. In Trashin' the Camp, the whole group loosens up, the wordless melody line dances around, there are animal noises, and it's a lot of fun. I'd like to hear this energy transferred to the slower repertoire, too.

I'd also like to mention the Monster Ballad Medley, arranged by Melinda Wenner, one of the group's musical directors. It's one of the best medleys I've heard a cappella. The transitions work well (it helps that these ballads are so similar), and the final fusion of the four featured songs is quite beautiful in its cheesiness, bringing you back to junior high dances.

I really appreciate that growth can be heard when comparing the earlier tracks (Walking in Memphis and Strong Enough) with the most recent ones (Tonight and the Rest of My Life and the BOCA-chosen Everything You Want). This fledgling group (founded in 1998) is finding its sound and honing it well. I'm sure it will continue to grow and change, and I'm looking forward to checking out their progress with their next release.

Available through the group's web site, Collegiate-Acappella.com, and Mainely A Cappella.