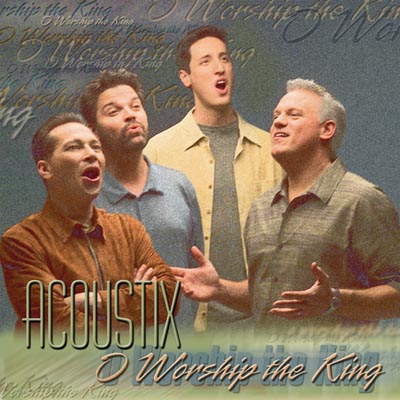 Acoustix is a barbershop quartet that won the International Championship over 10 years ago on their first attempt. That is correct. However, it doesn't even begin to tell you about the Acoustix journey and their latest stop.

The members of Acoustix had a rich music heritage prior to joining voices. Since that time, this foursome has challenged a cappella music in every way possible. They have produced highly acclaimed CDs that started with their fundamental sound, barbershop, expanded into a jazz repertoire, and pressed a platter of patriotism before and better than the current wave of patriotic music.

Now, they again prod their devoted following in a new direction. The 'Stix hail from Dallas, Texas, the western edge of the southern Gospel Belt. Their new CD is titled O Worship the King. It has elements of the southern male gospel quartet, contemporary Christian music, traditional worship songs, and good ol' American patriotism.

If that doesn't challenge the faithful enough, this collection has four cuts that are accompanied.

So just how good is this multi-directional assemblage of music? Very good. In fact, excellent. A cappella aficionados are moaning, "But it's got instruments ... yech!!". Don't let that slow you down in calling your favorite music source. This is good stuff.

Did I find any problems? Yes, but they never really detracted from the resulting album. Too often you can hear the singers' inhalations. Even though I really like the song, the bass's voice on the first cut is significantly over-amplified. On other solos, he never comes close to the basso exuberance of Worship the King. The Lord's Prayer does not have the edge and energy that I have heard from other groups.

You can guess my opinion of this CD by ignoring the last paragraph. This is truly a collection of hymns and sacred music for all ages.

While there are many songs on this CD that I really liked (O Worship the King; Fear Not, My Child; What Wondrous Love is This / O Sacred Head, Now Wounded), there is one that needs a special comment. The twelfth song, Anthems/Ode to Joy, is a Jay Giallombardo arrangement that combines Ode to Joy, The Star-Spangled Banner, and O Canada. It is a duet sung by The Toronto Northern Lights Chorus and Acoustix. I have listened to it more than six times, and each time my body is overcome by goose bumps. The first three times I had tears rolling down my cheeks. The arrangement is fantastic and the singing is awesome. Thanks to Jay, The Lights, and the 'Stix for this very memorable vocal performance.

Train wreck! Look away! Too late. Poor unsuspecting Acoustix fans, subjected to such a monumental lapse of judgment, with not enough rewards tucked in between.

The ratings system fails me for this album. It was not average, it was awful and excellent. But not at the same time. The excellent parts were as you'd suspect: four Acoustix singers doing their thing, ringing chords and being their heartland barbershop selves. The awful parts are truly awful, in a slick help-I'm-trapped-in-this-used-car-dealership way. There's a big band playing this horrible oompah stuff, and there's the quartet sounding like they're wearing American-flag waistcoats and standing in front of a sign that reads "Deals, Deals, Deals". It's the sort of music you might encounter at a Tri-County Chamber of Commerce picnic. Jesus lyrics or no Jesus lyrics, you certainly wouldn't want to hear it in a church.

I'm not sure where religion fits into all of this. Most of the songs are ostensibly hymns, but only a few put me in anything like a religious mindset. The Wondrous Love medley, yes, and I suppose The Lord's Prayer. They were a cappella, and they were nice. So was You'll Never Walk Alone, although it's a stretch to present that show tune as a hymn. Fear Not, My Child was less successful, probably because Acoustix was singing as solo-and-background, not as homophonic barbershop quartet.

This album makes me want to send 50 bucks to the KIBber contingent, those "keep it barbershop" puritans who count seventh chords and are constantly vigilant against stylistic departure. I'm not usually one of their allies, as my previous Acoustix reviews will attest (I loved the big band on Jazz, Jazz, Jazz, and some of the tunes on Cool Yule were downright catchy). But this new album is like an electric tuner. The further Acoustix get from straight-up barbershop, the more the little red lights come on and the green light fades to black.

Departures can be good for groups that are stuck in a rut, but with this album, Acoustix has departed too far. Its singers need to get back to their roots and remember what they are good at, and why people started to listen to them in the first place.

RARB readers will testify that I've extolled the virtues of the exemplary barbershop quartet Acoustix on many an occasion. No matter the material, this group could always manage to move the listener with expressive, dynamic musicality. Even songs so rooted in tradition that they had lost their contemporary vitality found new life with Acoustix. They had a magic. Sadly, on O Worship the King, the spell seems to be broken. These consummate performers are still exceptionally musical and still well-produced, but the group that once billed themselves as "The New Science of Sound" now seems reluctant to push the edge. And with material as well-worn and potentially hokey as that on Worship, the result falls short of what this amazing quartet has produced on prior CDs.

That said, the arrangers on Worship read like a who's who of vocal jazz, pop choral and barbershop. How about Grammy award winner Gene Puerling (Hi-Los, Singers Unlimited, Manhattan Transfer)? How about world-renowned choral music composer/arranger Kirby Shaw? (What choral student hasn't sung at least one Shaw arrangement?) And how about two of barbershop's brightest, Jim Clancy and Jay Giallombardo? Now imagine every track recorded on the highest quality equipment under the attentive ears of expert producers. Worship is unquestionably quality throughout.

The vocal production is reminiscent of groups like AVB. Acoustix's new "fattened", slightly chorused tone makes their sound incredibly rich, yet less intimate and raw than on previous CDs, especially during some of the barbershop-style passages.

Purists may find themselves frustrated by the four accompanied numbers, in part because the instruments are high enough in the mix to partly obscure the harmonies. But it should be noted that the instrumentalists are excellent nonetheless.

Fans of the genre will likely enjoy Worship and its guest stars, but if you're looking to be converted to Acoustix, I suggest purchasing one of their prior releases.