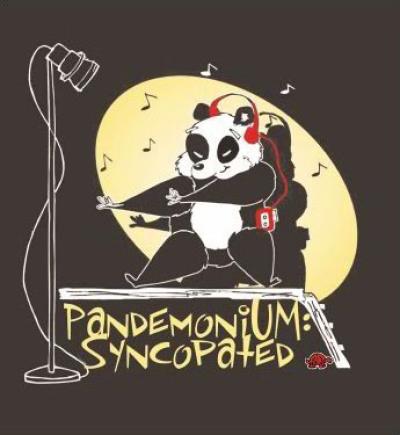 I hate to be the bearer of bad tidings, but such is my unhappy task in reviewing Syncopated. PandemoniUM bites off considerably more than it can chew on its latest release in nearly every respect. The arrangements are unobtrusive at best and ridiculous at worst. Vocal percussion is anemic, but not offensive. Intonation is troubled throughout. Mix, blend and dynamics are weak. And, except for a scant few tracks, PandemoniUM's leads can't handle the challenges of their chosen songs. The songs are pop-rock, but the group is not. Even the most forgiving ear will find PandemoniUM an unpersuasive imitation of the genre. This is a young group that needs to start with the basics.

Several tracks use the medley technique. But instead of pairing songs in which the listener discovers hidden connections, PandemoniUM has paired several songs which just don't sound right together (Superman; Man of Constant Sorrow/Johnny B. Goode; What I Like About You/ R-O-C-K In the U.S.A). The arrangements seem not to reflect the last ten or fifteen years of evolution in collegiate arranging. I thought the "neer-neer" guitar solos were gone for good. Sadly, no.

(Just as a note about my track scoring: Each 2 is just shy of a 3, but each 3 is just above a 2. The difference was slight.)

My best advice is for the group to start with songs which are well-suited to the leads. It's not enough that you like the song; it has to like you too. Next build some simple arrangements around that anchor. Then it's practice, practice, practice until the intonation and blend lock and the musicality can really be explored. Right now mezzo forte describes 95% of the CD. There's a great deal left to be discovered here.

Once the music locks, the joy these singers have for their art will shine through. This CD is really a product of graduation schedules more than readiness. It's step one, and undoubtedly, with hard work, PandemoniUM will make great strides between this and their next release.

Pandemonium…the group's name alone conjures up images of chaos and activity. The liner notes of Syncopated also tell us that the group is UMD's "most outrageous and unusual a cappella group". So you might expect new sounds, innovation, and high energy, right? Unfortunately, you won't find that here. I didn't hear anything novel or unusual on this album. Nothing chaotic, even; the group sounds so careful and rigid throughout.

The group's sound is what I would expect from a fledgling a cappella group several years ago. The tuning is OK, although their blend is all over the place. The arrangements are quite bland and "doombada". I am OK with bland and "doombada" if it's done well, and if it's appropriate, but when covering bluegrass (Man of Constant Sorrow, credited to the Soggy Mountain Boys instead of the Soggy Bottom Boys, a nearly unforgivable error), you need something that at least vaguely resembles picking. Their version is devoid of buoyancy and twang (yes, twang can be great). The soloists are generally mediocre, sounding more like karaoke singers than rising stars giving songs new life and energy. And speaking of energy, the performances (from the block and soloists) are very square and careful, leaving me wondering if they're as bored as I am. I feel like Syncopated is a very odd name for a CD that features so little swing.

Don't get me wrong: the album still has merits. Zach Friedlis brings his own edge to If You Could Only See, and the solo/duet of Don't Speak has some good power. The group lifts their energy for Parachute and there are nice dynamic contrasts in My Favorite Game. But more often than not, other forces counter the good moments. The basses have a deep, round tone on Foolish Games that supports a fluid solo/duet, but the higher male parts of the arrangement destroy the fluid feeling. Flood gets nice energy from the group in the verses, but the soloist's weakness on the higher choruses results in a drop in energy instead of the necessary kick.

To earn the name they have chosen for themselves, I'd like to hear Pandemonium let loose more in the future. If they develop their fundamentals, work on their arrangements, and then get into the music they're making, they should be able to turn out a disc more worthy of wide exposure.

Someone tried to convince me a few years ago that the majority of a cappella listeners aren't even remotely interested in background parts, and that, contrary to the beliefs of a cappella singers themselves, the soloist is really the only thing most folks give a damn about. Of course, as an arranger I naturally objected. But after hearing PandemoniUM's latest disc, I'm afraid the argument may hold water. The disc features a number of lackluster solo performances, to the point that otherwise solidly sung backgrounds are rendered equally as insipid. Many soloists are pitchy, unconfident, lack memorability, and are often drowned out in the mix. The result is an average disc.

That isn't to say that the backs are flawless, by any means. Overall, the arrangements could use some work. Often, energy-building moments are squandered by inappropriate arranging decisions. For example, the pre-chorus of Breathless is done on tasteful "oh" syllables with some tight harmonies, only to open up to a stale and busy chorus that is truly anticlimactic. Others, such as Soak up the Sun, rely too heavily upon tired "ba da" and "doo doo" for measures on end. Further, the group seems overall less than comfortable with groove and rhythmic feel. There is a tendency to rush which makes for an unsettling, liquid tempo.

Though I respect two of the members for carrying the entire vocal percussion load on this album, the album features a very limited range of sounds. The album could use a lot more "pft" and a lot less "kch" for the snare hits. There is a dearth of crash cymbals. Someone in this group should really study drum sounds before they hit the studio again.

The pitch was fairly good. I gave an overall score of 3 because the blend suffers at the hands of strident sopranos — a recurring issue for mixed groups since the dawn of a cappella.

There are more flaws I could point out, but for the sake of positivity I will give a shout-out to a few highlights. Guster's Parachute has a distinct passion and energy that PandemoniUM recreated powerfully with a strong arrangement and fantastic blend and even a rocking solo on the outro. The album's opener, In the Meantime, has a cool energy that is only slightly aggravated by a somewhat awkward solo performance. Unlike many of the other selections on this disc, I've never heard a better a cappella version elsewhere.

Ultimately, this disc has enough areas that need work that I would be hesitant to recommend it to the discerning a cappella listener. But because there is strong energy from the backgrounds overall, I look forward to hearing their next go-round.