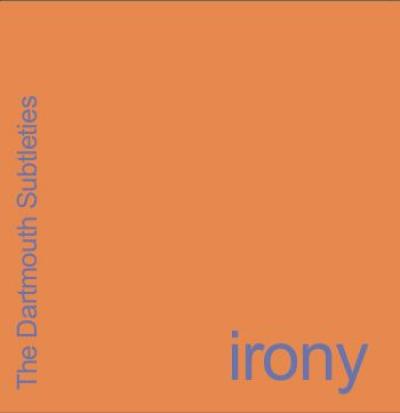 Recorded women's a cappella has progressed by leaps and bounds over the past few years as more and more groups discover how to use the studio to play up the subgenre's inherent strengths (the blend of good female voices is a sound unmatched in beauty) and overcome its common weaknesses (wimpy bass and percussion, a tendency to "over-prettify"). Irony is a classic old-school women's a cappella disc. That, alas, is not a compliment. The RARB scoring guidelines work perfectly for this disc: it's not terrible, but I can think of no better word to describe it than "weak".

The Dartmouth Subtleties fall into all the usual traps on Irony. Soloists are generic and interchangeable, though all have pretty voices. Many don't seem emotionally committed to their material. More than a few strain to hit their low notes (Amanda Cropper on When I Grow Up, Catherine Buck on Silent All These Years). The only soloist who really bothered me, though, was Melissa McDaniel on Stupid Girl; her vocal inflections are corny and overwrought.

The Subtleties' arrangements are poor. Their charts tend to concentrate too much on hooks and background melodies and not enough on chords; a good arrangement needs to contain both. Their arrangments sound messy. This tendency most hurts No Scrubs and Come On Over. Rap and R&B's spare backups can translate to a cappella, but not without some chordal padding. Also, it's never a good idea to give the basses the third or fifth of the chord when they ought to be singing the root. Study your theory, people; inversions serve a completely different musical function from that of root-position chords. Your basses can't hit the root, you say? It's better to bring them up an octave than to destabilize the chord by changing their note.

In block, The Subtleties sing tentatively, with gorgeous blend and hit-or-miss tuning. Sweet Surrender contains some wonderfully slinky soprano harmonies that elevate it above the rest of the album. Slinky is good. Do slinky more. The Subleties' bass section lacks the depth and power of the best women's groups (even without studio enhancement). And the VP is just plain awful — totally amateurish, doesn't drive the songs at all.

In short, even before they can reap the benefits of real production, The Subtleties have a lot of work to do on the basics. They need to take risks in their audition process. Place limits on the number of light, pretty, blendy mezzo voices you'll take in a given year. Take the more distinctive, powerful soloists instead — then teach them to blend if needed. Make low voices a special priority, and invest in a group copy of the Wes Carroll percussion video. Arrangers: make sure you've got the song's basic chord structure down first. Then add the fun background melodies. And my advice for consumers? Wait for the next album and see how The Subtleties do.

I come not to bury The Dartmouth Subtleties, but to praise them. They don't have the voices, the polish or the budget to compete with the good collegiate groups, but given what they have they did everything right. That sounds terribly patronizing, and for that I apologize. But better to get the bad news out of the way first.

First good thing about this album — it's short. Only ten songs. Carefully chosen, no obvious lemons to drag the album down. Second good thing — simple arrangements that sound like they've been rehearsed. Living within your means gets short shrift, in finances and artistic ambition, but sometimes it's just the thing. If your group doesn't have the time or the chops to go for the tricky stuff, how nice to stick to something that you can nail instead.

Third good thing — nice songs. The repertoire converts well to treble voices. The solos are all in a comfortable range. And in related fashion, the fourth good thing is that uptempo tunes outnumber the dirges. This is not to be undervalued, especially if your group (like most groups) is less than perfect. As a former collegiate arranger, I can identify with the urge to fall in love with some moody monotone piece, lovingly arrange it and proudly bring it to your mates to sing. But when every group member does that, it generally leads to an album of mush unless you have a big production budget amd a professional coach or producer. Also, a poorly tuned uptune (He Wants Me Back) is tons more fun than a poorly tuned lament (Two Points for Honesty). A good selection of cheerful songs does half your heavy lifting for you.

These four Good Things (sorry Martha) can be tickets to success for just about any amateur organization. The Subtleties ace them, and then they come through with optional good thing five: at least one very nice song. Silent All These Years is sung well and stands out from the pack. Because The Subtleties are on the ball, they put it up close to the front of the album, where the best stuff belongs.

I wish I could say that The Subtleties made a great album. I can't, but they probably know that already. They don't have any star voices, the tuning is amateurish, and the blend comes and goes despite their best efforts. I can say, however, that they did a really great job, which made it a great treat to hear. I hope that gives them almost as much satisfaction.

The Dartmouth Subtleties and Kid Jonny Lang have something in common. Because both of their songs address serious, soulful, heart-wrenching subjects with emotional depth, there is an inevitable question that must be asked: can the youthful, inexperienced performers pull it off? In the case of The Subtleties, the answer is no.

Irony is one of the more conservative albums I've reviewed. For the most part, I love the covers they chose. I just don't care for their renditions. The backing vocals are timid, and the soloists simply don't invest themselves enough. It all comes across as careful, inhibited, and withdrawn.

Arrangements aren't very interesting. Stupid Girl is the exception. There's a hint of bite and bitterness in the solo that's missing from all the other songs. In addition, the lip buzzes, R trills, and overtone shifting create an interesting, catchy vocal texture. The other songs could use plenty more of this kind of creativity.

The album sounds natural. No octave pedals, very few effects, subtle use of EQ if any at all, and a conservative mix. Because of these choices, the album can sound squeaky and thin due to the limited ranges of the voices involved. It's nice enough at times, but never captivating or compelling.

It may be that The Subtleties intended to make a vastly understated, emotionally distant, flat album that ironically contrasts with the intensity of the lyrics and music involved. Whether it's intentional or not, it's possible to be too subtle. And that's why Irony doesn't work for me.

For ordering information, email the Subtleties at Subtleties@Dartmouth.edu.