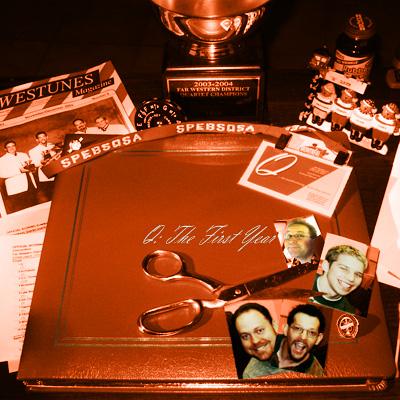 Q is one of the hippest names I've yet heard for a barbershop quartet. The implication surrounding the choice is that something very new, very different is bubbling here. But after that buildup, Q fails to deliver anything groundbreaking. Despite the wide age range of its members, Q is definitely your dad's barbershop.

That aside, the voices are good, with sky tenor Raymond Davis standing out as a talent. But chords, while never out of tune, take their own time to lock into the perfect ring barbershoppers pursue. And blend, while also usually quite good, is upset at the climactic moments where vocal extremes make Q sound like 4 singers, instead of the unified force suggested by their monogrammic name.

Song choices and arrangements are tried and true and therefore also nothing noteworthy, though Q's unswerving attention to dynamics and phrasing breathes life into them. Given the time pressure these gentlemen were under to get competition-ready, the lack of originality is no surprise. And they do a beautiful job with standards like When She Loved Me.

I would like to see Q do some more interesting arrangements, drop the ineffective saccharine humor, and put a little more work into cut-offs and blend on their big tags.

Q, to support younger quartets, includes a fine track from guest artist Whirlwind. Though these singers are a bit rougher around the edges, they have an infectious energy and have chosen a song suited to their talents (I've Been Working on the Railroad)

Q:The First Year is a fine achievement for a young group (two years old, to be precise). Now that Q has run through the basics, it's time for this group to step up and deliver a sophomore effort that realizes the full potential of these championship level musicians.

The back of Q's debut album says it all: "from first rehearsal to district champion in nine months!" This is an astounding success story and a quick rise to the top. Not only did Q win the SPEBSQA's district championship, it went on to place 28th in the International Competition. Not bad for a group not even a year into things.

The album gives a clear picture for Q's success. It simply sounds great. This barbershop quartet is full of talent, energy, and a drive to succeed.

Vocals parts are consistently excellent, with the baritone part often falling a little weaker than the other three. This is understandable however when one realizes the baritone is only a senior. In high school. In time, his pipes will be able to match up.

Q's greatest strength is the strength and intensity of the sound. Every single note is in tune, with zero exceptions. Lenoil has just enough of a "tongue-in-cheek" sound — not too forward or nasal, but not too guttural and chesty — to make us swoon on lead. Stewart clearly has the range for the low notes and an excellent sense of setting the bassline tonality. The strongest member, however, is Raymond Davis on tenor. His clear, perfectly tuned voice pierces through the quartet, never wavering. Fantastic breath support and precision control of vibrato add to his arsenal of singing talents. The sound is rich, full, and uninhibited.

Q can still take it further, however. Hunt's voice needs to come into its own maturity, and nothing can hasten that. However, Q needs to find a way to capture the intensity of its closing cadences (which are loud, bright, and perfect) throughout songs. After hearing the sparkle of the final harmonies, the rest of the songs just seem dull. If Q can keep up the intensity without kicking up the volume, they'll be nearer that #1 spot.

Their engineering could also use a bit of work. This album is about as organic as they come. Yet with a few slight alterations, future projects can be even better. First off, get rid of the breath before every song. It's unprofessional and even a bit irritating. More than that, however, swap Stewart's mic out. The bass notes are clearly there, but the equipment wasn't picking up any resonance on the low frequencies. A little more booming bass for the album would be well suited.

Finally, a word about energy. The slower numbers (e.g., Don't Blame Me, Love Letters) swell with emotion and feeling. Try a little of that in the faster numbers. The straight-tempoed, stiff-legged faster stuff (Santa Claus, This Is It) just isn't fun. Relax a little and enjoy the music! Take a little rubato when needed. Bring the interpretation of the slow tunes up to the level of the faster ones.

All in all, a superb effort, especially for a debut album. Keep up the good work.

As one might expect, Q's debut album is true to its title: a selection of tunes from the group's first year of existence. And yet, other than 18-year-old baritone Cory Hunt (who appears to be the only member under 30), there is very little that's young or immature about these West Coast barbershop champs. Q boasts a command of the "barbershop sound" that I suspect is highly superior to the majority of fledgling groups in the genre. That is to say, this ensemble showcases a blend and dynamic range as polished and well-executed as any barbershop group I've heard, and in no way reveals their relatively brief cooperation. I strongly recommend the disc for even the most discriminating barbershop fans.

Again, unsurprisingly, Q's most remarkable and charismatic voice is lead Robert Lenoil. In addition to delivering the melody with the genre-fitting camp and the appropriately scooped phrasings, Lenoil displays his chops on this disc to the utmost by sustaining piercing, held high notes that last for what seems like about five minutes. Strangely, almost every song ends this way. Nearly as impressive is Q's bass, Mike Stewart, who thumps his way powerfully throughout the album. The two other background figures, tenor Raymond Davis and the so-called "punk kid," Cory Hunt, do a great job of not being noticed, which seems to befit their barbershop mission.

Unfortunately, like most of the barbershop discs I've had the opportunity to examine with a critical ear, this recording is crippled by the very goals that the barbershop genre establishes. I will even go so far as to say that it is hard to avoid an indictment of recorded barbershop in general when dissecting the problematic aspects of Q's debut. Insofar as the primary goal of recorded barbershop is to capture the live performance as purely and crisply as possible, Q has succeeded. Indeed, it's a good live-sounding album. However, the recording disappointingly ranges from painfully quiet to speakers-rattling-oh-shoot-that's-too-loud, so that I was forced to continually monitor the volume knob throughout. The barbershop genre exalts the creation of dazzling, ringing chords with umpteen harmonics (which can be found in overabundance throughout The First Year), but it is these same sounds that, while spine-tingling live, can surprisingly annoy when recorded and sent back through one's stereo.

I certainly didn't intend for this review to become a diatribe on barbershop as a recorded genre, so I will move on and save the rest for the RARB Forum.

The bottom line with Q's recording is fairly straightforward: if you already enjoy barbershop music or have a keen interest in this particular style of vocal music, you are sure to find this recording worthwhile. As for the rest of us, you are better served checking out Q, or any other world-class ensemble, at a live concert.