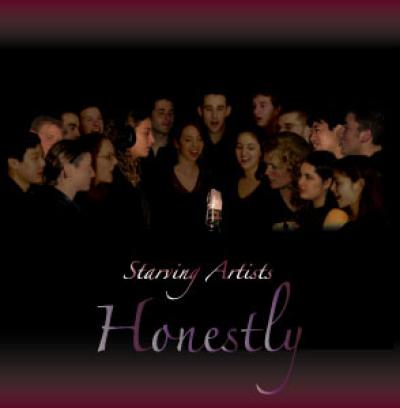 It's hard to believe the Brandeis Starving Artists are a full-fledged college group, just like all the others whose discs roll down the pike. This group's winsome and natural sound gives the impression of a good high school group, or maybe a bunch of eager freshmen. But as far as I can tell, they're not.

That creates an expectations problem for Honestly. On the one hand, it's not a bad effort. But on the other hand, it's not a very good one, especially for the universe they're operating in. The kindest thing I can say about the tuning is that it's not as bad as I initially thought. Likewise, there are no power solos, but after a few spins I started finding things to appreciate in many of the voices. I like being able to find the good in things, but I also hate to recommend something that won't appeal out of the box.

I really don't have much more to say about Honestly. The songs are nice but normal. The arrangements are bland and run to the simple side. The energy is sincere, but can't overcome some of the technical hurdles. And the production is subdued, allowing the group to sound like ... well, themselves, as near as I can tell.

If you already like this group, you'll probably like this disc, since you already know where to listen. For the rest of us ... well, there will be another college album along before long. This one may just roll by.

The return address for my copy of The Starving Artists' was Ashley Firestone, East Setauket, New York. I work in East Setauket and live a mere 10 minutes to the west. I was delighted to discover that most of the album was recorded in Port Jefferson, 15 minutes from my home. Although this is a Brandeis group, they get an enthusiastic North Shore, Suffolk County, Long Island shout-out from me.

Although the album isn't very good by any empirical standard, I found myself won over by Honestly. It's the yearbook album of a group that really loves what it does, and that stood out above the musical flaws.

Take the group's soloists. With the exception of Kate Perch, who turns in a lovely performance on White Flag, they just don't have the voices to do justice to the material. But within their vocal limitations, the right people are singing the right songs, they're giving it their all, and they're making the right stylistic decisions. Firestone's shrill alto is a surprisingly good match for Hoobastank (Running Away) and, especially, The Police (Message In A Bottle). (I wouldn't complain if she canned the gratuitous shrieks and growls, though.) From a timbral standpoint, music director Bert Huang (Just (You Do It To Yourself)) is too whiny to pull off Radiohead, but from an emotional standpoint, he nails Thom Yorke's eerie paranoia. Josh Geyer's voice (Dosed) is almost painfully thin, but The Red Hot Chili Peppers' Anthony Kiedis has a thin voice too, and his songs sound good for thin voices.

Similarly, while energy and dynamic contrast are not exactly present in spades, joy and pride in being able to pull off some very complex arrangements radiates from the backing vocals. The Starving Artists pretty much stay in tune throughout; exceptions typically occur when the sopranos go very high.

The group's arrangers, Huang, Dara Wald, Geyer, and Jessica Peres, have a good grasp of the complex Off the Beat style of arranging that is prevalent today. Occasionally they'll do something really cool; I thrilled to Dosed's effervescent riff, loved the tenor harmonies on the chorus of White Flag and the countersolo at the end, and deeply dug the quotes on Message In A Bottle. Some weird choices also pop up in the charts; Walk On The Ocean inexplicably quotes Sarah McLachlan's "Ice Cream". But the arrangers' ear for syllables is not nearly as well developed. On a few songs, the basses sing repeating eighth notes on "doo-doo-doo". This is a no-no; parts that move that quickly need to be sung on "bm" or "dm" to avoid sounding awkward. The dreaded "za-za-za", which I've never heard deployed successfully, pops up all over the place. "Yabba-dabba-yabba-dabba" rears its hideous head in Just (You Do It To Yourself). And, Starving Artists, please don't ever use "jew" as an acasyllable again, even if you do go to Brandeis.

A few tracks don't work at all. Feels Like Home is irredeemably boring. (Why on earth does the album OPEN with it?) Faded is a mess from beginning to end. It begins not with the song's signature synth hook but with a chord sequence newly composed by arranger Geyer. That's not a problem, but these chords are set to ungrammatical, nonsensical lyrics. From there, the Artists launch into the most anemic performance on the disc, topped off by a soulless solo from Craig Lareau. Mind you, Soul Decision is not exactly a paragon of hip-hop authenticity, but this version makes Soul Decision sound like Chuck D. Not only are The Starving Artists poseurs on this song, they're posing as poseurs.

And ... sigh ... another CD, another bad version of Bring Me To Life. The main culprit here is the arrangement. The crunchy guitars on the verse are replicated with muddy lower-register chords while the women float above on the piano part. They should have opened up the voicing and used some altos on the top note. The syllables don't help either: "ja-nin, ja-nee, ja-na, ja-na". Oy. Becca Reiman does a decent job with the solo, but the unidentified screaming guy part is unbelievably awful.

The Starving Artists are a relatively new group, and they seem to be coming along nicely. I predict great things from them a few years and a couple CDs down the line. In the meantime, while I enjoyed Honestly, I wouldn't go out of my way to acquire it.

Mediocre from start to finish, The Starving Artists' latest album, Honestly, fails to present a case for greatness, or even...goodness (for goodness' sake!). The verdict is in and the album is guilty as charged: one count of producing another typical collegiate mixed-group album consisting of thirteen not particularly bad, but nonetheless mostly-forgettable pop covers, the majority of which contain moments of problematic tuning (primarily in the upper voices) and a resulting strident blend. Mindlessly heterogenous arrangements are sung with an overall lack of purposefulness, passion and direction. Ultimately, it is the listener who receives the true punishment.

To its credit, the album puts its best foot forward with the opening track, Feels Like Home. A thick, warm, close-miked sound showcases the Starving Artists at their best, tuning-wise and blend-wise, though not as intense dynamically as the best collegiate groups. If every subsequent track had this sound, the album would be much better. The soloist, Jessica Peres, delivers a heartfelt and stylistically appropriate lead. The only drawback is the vocal percussion, which is mixed too low and performed with insufficient "oomph" to secure a solid feel.

Every track has issues regarding percussion. Beyond the aforementioned lack of volume, the groove throughout the album feels liquid and unstable; sometimes the sung parts can come across as out-of-sync. The best collegiate recordings typically have the best vocal percussion; it is used to create and build energy, not just to keep time. This is true whether the song be slow or fast. More crash cymbals, more fills, just...more. The Starving Artists can improve their recorded sound dramatically by focusing more time and energy on their percussion.

Of course, first and foremost, the group needs to eliminate the kinds of problems that caused a number of their songs to receive a score of "2". The most overdone collegiate track in recent memory, Bring Me To Life, is made worse by a lack of energy when the sound should be voluminous. Like many tracks on the disc, this track is limp and timid. The next egregious offender is Faded, which is the most uninspired and least danceable a cappella version of this track I've heard. Perhaps if the tempo were faster this one could get off the ground. Tuning issues aside, Walk On The Ocean contains some wholly inappropriate arrangement "samples" from other pop tunes which have no business being in the chart and pretty much ruin an otherwise successful track. Last but not least, the group sounds plainly tired in King Of New Orleans, as if they did this one at the end of a long recording session. One can actually hear the group breathe at the ends of phrases instead of building towards the next section. The last chorus is sung with the same intensity (or lack thereof) as the first one. Such amateurism makes it impossible to score these tracks higher.

This group will hopefully continue to improve its recorded sound. In the meantime, consider skipping Honestly.

To purchase your copy of Honestly, please visit the Starving Artists' website or send an e-mail to s_artists@brandeis.edu.