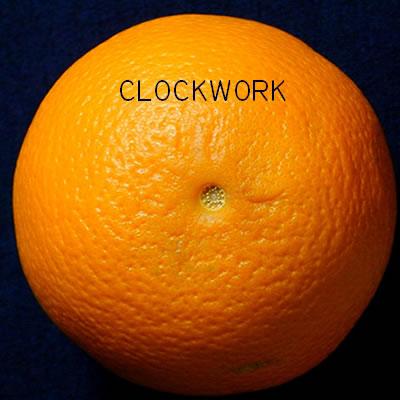 Clockwork's album has an edgy sound. Arrangements are tooth-grindingly dissonant at times, though the group's pitch is good. The group spreads diphthongs almost to the breaking point and doesn't stay still for very often, leading to a show-tunish feel. As is often the case in this style of vocal jazz, the group often sacrifices blend and balance to achieve that biting jazz chord sound.

Clockwork's sound is angular and cool rather than warm and fluid. The group tends to favor abrupt chord motions, which suits their precision timing very well. Sibilant "s" and "t" sounds, along with breathy singing and in-yer-face miking add to the angularity. The album feels a little harsh, like it's been recorded under a bright, white operating room light.

Though jazz groups often skewer blend to magnify bite, many groups still pursue balanced chords. Clockwork furthers the sensation of coldness with a top-heavy balance (especially Corcovado, Lush Life). Though the album's bass is eq'ed with reasonably warm tone, the almost over-the-top style and cutting vocal tones of Clockwork's soprano and tenor are domineering. The soprano line, which seemed to be miked as a perma-soloist, rudely yanked my ear out of balance through most of the album. This singer's deliberate scooping into notes, manipulated tone, and delayed-action vibrato were constantly on the verge of over-singing (especially Polkadots and Moonbeams). Only occasionally, as during the tenor's strained, belted last note of the Gershwin medley or a during a rough patch nearing the end of Lush Life, would any other voice part demand as much attention. I'd be blasting these higher voices for their horrible blend if cutting tones weren't part of the vocal jazz genre. It's clear, though, that on songs where they are obvious soloists, such as In the Garden of Eden and My Baby Just Cares For Me, the higher singers' jazzy style and technique overcomes their rough tones and lifts those songs to a higher level.

Every reviewer is biased in some way, and I must disclaim that I do not prefer vocal jazz. Many of the stylizations that I've mentioned in this review are standard to vocal jazz, and fairly offensive to my ear. I think my preferences show themselves in my favorite track on the album. By far my favorite track was the group's jazz spoof on Iron Butterfly's classic rock tune, In-A-Gadda-Da-Vida. The group cuts loose with an octave pedal, some distortion, reverse cymbals, and stylized jazz-then-rock singing. It's all very cleverly done, and I love the concept.

Though the album could have benefited tremendously from some warming up (de-esser, compression, mix out imbalances, etc.), any group that can pull off a genre-bending Iron Butterfly song has clearly got some brains and some skills, which should take Clockwork far in whatever genre they choose to sing.

Clockwork (the cover features a giant orange) is the first offering from the group Clockwork, an a cappella ensemble from "a jazz point a view". This quintet of singers, with four men and one woman, recently took the Harmony Sweepstakes by storm, placing second overall in the 2004 competition. This six track EP will leave the listener thirsting for more.

The album opens and closes with a bang. The first track, In the Garden of Eden, is a jazz take on the Iron Butterfly super hit In-A-Gadda-Da-Vida. Thankfully shrunken from its original 17 minutes, they deftly transform this rock powerhouse into a practical jazz standard. The group's greatest asset, bass Stephen Saxon, masterfully shows off his chops here with tonally perfect repetitions on the song's chromatically difficult and vocally taxing bass lines. He keeps a furious pace and drives the song throughout, never letting the energy down. The soprano carries the melody in traditional jazz style, with improv and heavy syncopation, until the bridge hits with a tongue-in-cheek imitation of the original. Tasteful effects have been added, including subtle chorusing, delay, and reverb. This piece is truly a fantastic find, and I would love to see them perform it live.

The album closes with their rendition of the Gershwin classic I've Got Rhythm, somehow finding a way to produce an original arrangement despite how many times the tune has been covered. Here they show their more traditional chops with complex chords, leads bouncing from part to part, numerous versions and takes on the A theme, and a great understanding of jazz arranging.

The voices are great. As stated above, Saxon is the most consistent member of the group, with an almost supernatural sense of pitch, incredible range, and an uncanny ability to stand like an upright bass. He never falters. Soprano Angie Doctor's voice is a little too sugar-coated to my taste, but is well-suited to the genre. They are rarely out of sync, and tuning is great (but helped by delay effects).

One unfortunate thing about the album is the lack of liner notes, and I wasn't able to explore the band's history, background, or philosophy as much as I wanted. Also with this it is often unclear who is singing each part. This is most problematic with track three, My Baby Just Cares For Me. The tenor solo is fantastic, with clear pitch and maximum vocal control. Unfortunately I can't give a name credit as there are two tenors in the group.

Production could stand an upgrade. Most of the inner four numbers suffer from a compressed feel, without ring or fullness. Based on the caliber of the singers, I would tend to associate this with engineering (and a tight budget) rather than singing. I'd like to see them record their next album in a larger venue so their natural resonance can shine on higher quality equipment.

The final unfortunate thing about this album is its length, coming in at a scant 20 minutes. I felt I only got a taste of what Clockwork has to offer, and I look forward to being able to hear their next (hopefully full length) release. They are a great ensemble that offers well written arrangements, developed musicality, and plenty of energy and style.

Clockwork features an impressive collection of vocalists, including two founding members of Phil Mattson's Grammy-nominated sextet, The P.M. Singers. Given the pedigree of the Clockwork singers, I have to admit I was expecting a little bit more from "Orange". Still, it's a lovely album.

Arrangements, by the singers themselves and influenced by Gene Puerling and Phill Mattson, are the biggest strength of the album. In the Garden of Eden is energetic, complex and crisp. The longest of the bunch is the varied and challenging I've Got Rhythm/Fascinating Rhythm. Antonio Jobim's stunning Corcovado is pleasantly lilting and full. And Lush Life is beautiful and appropriately, well, lush. But that's not the only reason it stands out.

Angie Doctor is the brightest vocal gem among Clockwork. She shines from start to finish, but especially on Lush Life where she turns in the most emotive, detailed solo of the recording. Detail is something I was expecting to hear more often, though. It's there but inconsistently. Despite the lovely arrangements, more could be made of direction in phrasing, sustains can be static and lacking motion, and ends of phrases too often stop abruptly without appropriate shaping. It's these things that keep it from hitting an overall rating of 5.

Strong tuning and consistent ensemble, coupled with wonderful and diverse arrangements, provide enough reason to support Clockwork whether you dig vocal jazz or not.