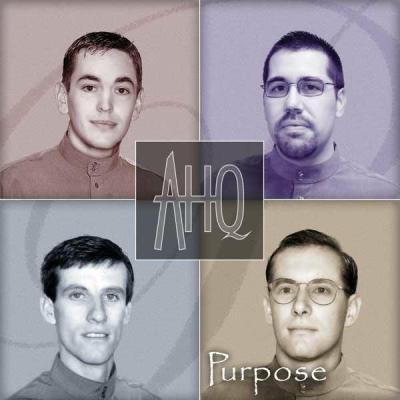 The A Cappella Harmony Quartet, or AHQ, a Christian group out of Oregon, has released its fifth recording, entitled Purpose. Offering up thirteen songs of worship with good musicianship, the CD remains mostly forgettable due to the generic simplicity of most of the tracks.

Musically, these four men make some very nice sounds. From what I can tell, the CD was recorded live by group member Tom Troyer, and the group's tuning stays quite good for a live recording, though there are the occasional glitches. More impressive than the tuning, though, is the blend. The unison line that opens the disc highlights this quality, and they maintain it as they open up into harmony. The bass has nice, round depth, and the tenor has some nice moments way up high (listen to I'll Live Again for examples of both). The singing, from the block and the leads, is honest and sincere, which is important for a disc full of simple tunes.

As I've mentioned, the biggest drawback to the disc is its blandness. There is a gentle sameness to the majority of the tracks, and many of the tracks have too much repetition for their own good to begin with. By the end of the disc, I don't want to hear another gentle song with several similar, if not identical, verses and choruses that sound very similar to the track before. And Can it Be could have been a nice, simple closer to a disc, though it offers nothing different from most of the tracks preceding it. Three originals penned by tenor Byran Smucker meld right in with the other tracks.

The sameness of the tracks highlights the two tracks that differentiate themselves, most notably Invocation and Soul's Been Anchored in the Lord. The former is a beautiful composition that creates a mysterious ambience which is unfortunately abandoned on the next track, and the latter is a gospel tune which gets better energy and spark from both the lead and the block than the other tracks. Keith Lancaster's Sweet Fellowship is a nice piece in the middle of the disc, but it still doesn't differentiate itself as these other two do.

The bonus track, Jonah, caught me off guard. After a CD full of tracks discussing God's love and forgiveness, we're left with a track designed to scare people into obeying God (or "like Jonah you'll find out the hard, hard way"...yikes!). Not only does the track give me the willies, it just doesn't seem to mesh with the rest of the album.

In general, there's some nice singing on this album, but I find very little on here to distinguish this disc from any other well-sung recording in the same genre.

When we last left AHQ, they were an earnest but very cloying Christian barbershop quartet with a tenuous-at-best grasp on their musical basics. Their new album, Purpose, represents such a drastic improvement over its predecessor, Lookin' Up, that I find it hard to believe it's by the same group.

Their intonation is better, though they are helped here and there by a little tasteful Auto-Tuning. Their blend is infinitely better, though Konrad Krabill's low notes are still throaty instead of resonant. Konrad's solo turns still bother my ears, but his brother David now sounds quite good when he takes a solo. The album is well-produced, not just a bunch of run-throughs around an omnidirectional microphone. Their songs, both originals and covers, are far less syrupy, often carrying enough force to move even me, a deeply committed Jew who has never in his life felt even a twinge of Christmas envy. (The one song that does cloy, Sweet Fellowship, written by ACAPPELLA's Keith Lancaster, has a gorgeous melody and chord progression to mask the lyrics.) And praise whatever deity one chooses, they even have soul! Soul's Been Anchored in the Lord, the kind of spiritual they would have made a mess of last time around, is given a beautiful, convincing reading here.

Looking at the writing and arranging credits, it appears as though Byran Smucker (whose name it seems both Hanna and I misspelled as "Bryan" last time around; sorry about that!) has replaced Tom Troyer as the group's driving musical force. I applaud this development; Smucker is a better songwriter and a better arranger. His lyrics have more emotional and spiritual impact, his melodies are more singable and less facile, and his voice leading is impeccable.

Smucker's songs do still have sort of an amateurish charm to them, so I will give a couple of suggestions. Hit the Mark's catchy melody is relentlessly syncopated, so the other voices should ground it with steady quarter notes. Otherwise the arrangement sounds herky-jerky. And on the title track, after the I and iii chords, I really want to hear a vi chord on the word "purpose". It's disappointing when the melody instead floats without harmonic support for a measure before going right back to the tonic. Also, on some of the weaker material (Stand in Awe Medley, Forgiven Says It All), AHQ does lapse back into weak dynamic contrast and shapeless phrases. But on the whole, this is a completely different group from the one I heard on Lookin' Up.

I'm going to tread on some thin ice here for a moment and talk about the group's faith. In a past review of another group, Rebecca Christie got in trouble for an uneasy reaction to what she described as "confrontational Christianity". TeKay concurred in his review. Some people were offended; but I thought they made valid points and I defended Rebecca on the RARB forum. There is nothing confrontational about AHQ's Christianity. Sinning isn't talked about in hellfire-and-brimstone terminology; it's "missing the mark". They're constantly singing about how in awe they are of God and how much they love Him; they're much too humble for moralistic grandstanding. They will never sing a line like "I believe that God is really righteous, and He won't put up much longer with lies like these." To co-opt from the present political debate, they don't know God is on their side. Rather, like John Kerry and Abraham Lincoln, they pray they are on God's side. As someone who does not and cannot believe the same things they do, I am deeply grateful for that.

Anyway, Purpose is a remarkable achievement for AHQ. They probably wouldn't take credit for it. In an interesting essay on their website called "Confident Inadequacy", Konrad Krabill writes:

When we don't feel inadequate, we usually think that we can handle the situation based on our own capabilities. This will tend to cause us, likely unconsciously, to consider only those ideas from within ourselves and to become blind to a broader range of quite possibly better avenues with which to get the job done.

Feeling inadequate, on the other hand, leaves us feeling vulnerable and, even according to Merriam-Webster, in need of a greater power other than ourselves to get the job done. It leaves us much more likely to listen to that Greater Power (that Greater Power, obviously, is Jesus Christ) Who actually knows what we're trying to accomplish and how best to get it done. That's where, and only where, the confidence comes in; He can get it done!

Personally, I prefer to think that God gives us potential, and it's up to us whether or not we fulfill it. But no matter how you look at it, if you're in the market for some powerful testimonials, powerfully delivered through music, you won't go wrong with Purpose.

The most obvious aspect to AHQ's Purpose is its clearly-defined sense of, well, purpose. Each of the thirteen tracks deals with Christian faith and fellowship; the liner notes even contain supplemental commentary on each song by the group members themselves. Though the styles and sources of the music vary among barbershop, traditional, classical, and original compositions, Purpose never strays from its theme.

The album's "sound" is as consistent as its message. The recording method throughout is basic and unobtrusive, with no apparent doubling or multi-tracking, no effects beyond reverb, and no studio wizardry. The album was recorded in Ripchord Studios in Oregon (where AHQ is based), but it would be easy for the untrained listener to imagine the performances taking place in a church or cathedral. Though a natural, chapel-style mix is appropriate for the material heard on Purpose, the album suffers from a sameness of sound from track to track.

Overall, the ensemble tuning is unquestionably good. Clearly demonstrating its grasp of barbershop stylings, AHQ is excellent when it comes to robust, tag-style endings to its songs. The guys seem to know this, and as such, the majority of the tunes on Purpose end with big, held-out major chords. However, aside from these powerful endings, the blend between the timbres of these particular four singers is not as consistently seemless as they are probably capable of.

Performance-wise, the group includes a solid, but not superlative, set of musicians. Leads and melodies carried by Tom Troyer and Byran Smucker are imbued with personality and occasional charisma. Conversely, although their background singing is good, baritone and bass singers David and Konrad Krabill (respectively) are notably more stilted and wooden when given melodies or exposed lines.

Good original songwriting in the a cappella world is rare commodity. Of the three original tunes by Byran Smucker, only Strong (co-written by member Tom Troyer) employs a less-is-more approach that is catchy and simple enough to be sucessful. The song comes across as a classic, really. I actually had to look twice in the notes to confirm that it was an original. The other two originals, Purpose, and Hit the Mark, are performed well, but are made uninteresting by vague and overly wordy lyics.

For fans of Christian vocal music, AHQ's Purpose would be a welcome addition to any collection, though not a crucial one.