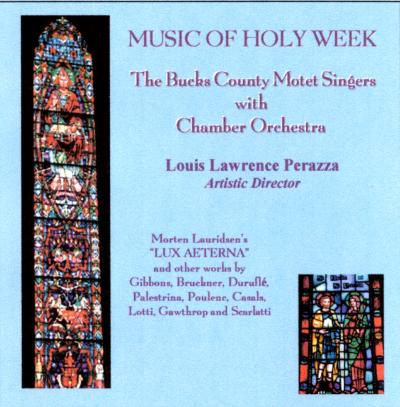 Oh, what a shame.

Though I've been more involved in contemporary a cappella of late, choral music is my first love. The tracklist on this CD reads like a laundry list of my favorite composers; Bruckner, Durufle, Palestrina, Gawthrop, Lauridsen. As far as I can tell, The Bucks County Motet Singers are even a good choir. Possibly very good.

But I really can't tell. You see, this is an unimaginably awful recording. The Trinity Cathedral in Trenton, New Jersey is apparently a very resonant space — nothing wrong with that. But it sounds like the microphone was so far away from the choir that it only picked up the resonance, not the actual singing.

To the group and its director, Louis Lawrence Perrazza, I'm sincerely sorry that I was unable to judge you on your musicality. But when a CD that essentially consists of nothing but reverb doesn't give me a lot to work with.

Go see The Bucks County Motet Singers next time you find yourself in the suburbs of Philadelphia. But don't buy their CD.

Though I have never before given a 1 for sound/production, I will be rating Music of Holy Week's recording work as low as possible without batting an ear. The sound is muddy for many reasons. First, the group was poorly area miked. Second, the cathedral is reverbalicious, but the recording was not eq'ed properly to deal with harsh reflections. The result is similar to an unpleasantly clammy room. Third, as a public cathedral with a live audience, there were the typical coughs, shuffles, etc.. There is an ambulance siren clearly audible during Ubi Caritas.... Last, and this is unforgivable and the main inspiration for the lowest possible studio/production rating, the album clips like crazy, especially during later tracks. Clipping is that incredibly grating, horrible electronic distortion of a sound that overdrives the recording gear. It's probably the worst sound ever. Clearly an amateur sound engineering job.

Contributing to the album's ragged sound are some singing problems. Though I'm sure the huge dynamic swells were exciting during the live performance, the swells are so dramatic that voices gush forth and sound a little forced. Oftentimes, it is these violent gushes that push the recording gear over the edge.

During swells and sustained loud phrases, another of the group's weaknesses rears its ugly head. The Singers have a very difficult time with blend. Individual singers sing much too loudly, probably in attempts to carry weaker singers. The soprano section has an especially guilty party, especially during Tantum Ergo... and Mary Speaks. One man blasts clamorously through Tristis Est Anima Mea. Blend suffers at the hands of chronic pitch problems as well. High-pitched entrances are invariably flat. Rising phrases tend not to reach top notes and vice versa. Loud, sustained, high notes tend to sharp in the soprano parts (Tristis Est...).

Compounding the blend problems are timing problems, both with individual singers and the group as a whole. Tristis Est Anima Mea, a disaster of a track, features a howitzer of a male voice who not only blasts out his line, but also enters each phrase early. A particularly noticeable soprano in Lux Aeterna tends to rush phrases, as much as a half a beat around 26'00". Or maybe the other singers enter their phrases late. Either way, the main group of singers lumbers behind these two tempo pioneers, clumsily trying to keep up.

The signs of improvement are audible, however. Quieter passages are better tuned, the blend is better, timing becomes less of an issue. The group's huge dynamic shifts and good enunciation show that the group is clearly paying attention to the director. The first half of Lux Aeterna, accompanied by strings and woodwinds, almost sounds like a different group. The tuning is much improved, the chords make sense, the timing is coherent. By the second half, though, the group is back to its old tricks. Exsultate Deo shows more restraint and warmth, except for one soprano who sticks out harshly and rushes some phrases.

When "alleluia" is said and done, the album feels heavy-handed. Poor miking, clipping, clumsy rhythms, and some overzealous singers brutalize some of the material.

The Bucks County Motet Singers sound like your average amateur choral group. In keeping with that tradition the women of the group fare a bit better than the men, but not by much. The basses don't have the low, rich resonance to support the women and the tenors frequently come through thin and reedy. When the women keep their vibrato in check, they're more tolerable than when they're engaging in a virtual battle of pitch wavering.

The repertoire is pretty standard stuff for a choir of this caliber. Some of it is challenging and interesting (Lauridsen, Poulenc); some of it is simple in a pure, basic sense (Palestrina, Gibbons). But the group struggles to keep my attention no matter what its singing. On the Gibbons, Palestrina, and Lotti the music should sing itself but instead it sounds labored, chunky, and plodding. The Lauridsen isn't confident enough to really impress and lacks the subtlety one might hear from a more established choir.

This is the type of group I'd be perfect for. I could sing the right notes, and my adequate, average, medium-bland voice would be inoffensive and acceptable. The music is diverse enough that it would hold my interest, and I wouldn't be completely bored. And I wouldn't have to worry too much about matching my vowels to the choir. I think I'd enjoy singing in a group like The Bucks County Motet Singers, but I don't really want to listen to a recording of it.

For ordering information, please write to: