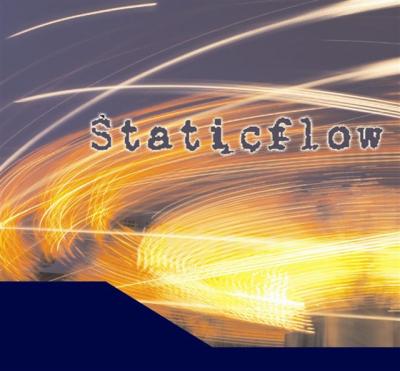 Brilliant album from Staticflow. Terrific sound, flawless production, fine solos, and a nice lineup of mostly original material. The songs make a very pleasing listen, and the lyrics are notably less banal than most original pop songs. If only I could remember what any of them sounded like.

Seriously, this is a brilliant album of background music. After at least a dozen listens, I am unable to hum a bar from any of the songs more than five minutes after the disk stops. I remember that there are a couple dancy tracks, a beatbox track, and that one sung by the chick with the great voice. And that's it.

Bizarre, ain't it? I don't want to sound like I'm criticizing this disk, 'cause really I like everything about it. It sounds great. It's fun to sing along with. The songs don't all sound alike, and the soloists sound like themselves, not like imitations of someone famous. All great stuff. But no memorable melodies, not a one. It's more like universal karaoke — for example, the chorus from the Pierce Pettis song Family sounds great as an overlay on the either of the final two tracks.

Right now I have the CD blaring so I can tell you more specific things about the tracks. The first song, Eliza, has some nice changes of pacing, a good bridge and a lovely flip of a chorus hook. Andrew Callard has a yummy tenor voice that reappears on the dancier track six, This Time. The fifth track, My Immortal, is a cover tune sung by Lauren Chrissos. It's probably from Dido or Evanescence or one of those other monosound bands. And Track two, The Less You Say is a nice dancy number that reminds me of the bridge to a Beyonce Knowles song, or maybe Jamiroquai. Track three, Go My Way, is arguably the weakest song, but it's still a nice listen, and it has a nice bubbly breakdown and a cheerful groove. Last but not least, track four, The Fill is a beatbox track with lots more neat sounds.

So what's the bottom line? Music lovers should buy this CD, there's a lot to love about it. That way Staticflow can stay in business long enough to write some catchier tunes.

Despite the six tracks, Staticflow's eponymous release is really a five song demo with a single filler track of VP. Thankfully there's only one cover (Evanescence's top downloaded single, My Immortal). Sadly, despite promising writing and good lead deliveries, the production and arranging range from average to weak, often pulling focus unintentionally and making some moments practically unlistenable.

Eliza's lead Andrew Callard has a Dave Mathews/Level 42-ish quality to his tone: a little airy, sometimes a little covered, but inviting and engaging. Unfortunately, the production drowns the voices in reverb to the point where everything but the lead is a bit muddy. The back up syllables of "doo-zay-doo" etc. put the nail in the coffin here.

Eric Olsen's lead on The Less You Say is very early nineties and again soaking wet with effects which again muddy what might have been an engaging performance. By contrast, Jeremy Goldman has a much brighter tone than Callard or Olsen. This helps his lead cut through the (still) muddy mix. Ironically, in a better mix, his tone would have been a bit too bright and nasal. "Skinameebop" is this track's most wholly inappropriate backup syllable.

From personal experience, I can tell you that, for years, Dave Baumgartner has been an impressive vocal percussionist. But not on his cut-and-pasted, multi-tracked solo, The Fill, which goes nowhere and doesn't strut any of Dave's impressive VP skills. He's far better showcased on the other tracks.

My Immortal features the quintet's only female, Lauren Chrissos, on a lead which displays her voice nicely but cannot overcome the sinking gravity of the collegiate style backups ("chow ch ch chow") and fails to conjure anything in harmony or musical line to rival the powerful string arrangement of the original.

This Time brings back Andrew on a lead where he shines a little brighter. The arrangement is eighties techno-pop, which makes it sound somewhat dated, but here it's much easier to leave these backups behind and get lost in a strong delivery. Just in time to ruin the mood, the ending of the song is just an unsatisfying dead stop, which leaves the listener practically agitated.

I have to believe that, contrary to most groups, Staticflow is far better live than recorded. One gets a sense of a group coming together, still finding its sound. But this CD isn't it. I look forward to the next release from this collection of talented singers, but I can't recommend this one.

Short and sweet, Staticflow's self-titled debut EP emerges with what in the a cappella world qualifies as a ton of hype. And while it's not quite the sort of disc one absolutely must have, it does mark Staticflow as a group to watch closely, perhaps even one that could eventually get mainstream radio play.

Extraordinarily for such a new group, this is the best-sounding disc I've ever reviewed. The bass shakes the room, the five voices fill the audio spectrum as you've never imagined only five voices could (OK, so there's some overdubbing), and the light, tasteful effects fit the music perfectly. I've said it before, and I'll say it again: 'dio is a production genius. Staticflow was wise to utilize his talents. So would be any group looking for someone to mix its disc.

But it's not just the production that makes Staticflow sound amazing. The group's tuning and blend are flawless. Their arrangements are economical and interesting. Backing vocals are somewhat lacking in energy, but that's a minor quibble. And Dave Baumgartner's VP is driving, nuanced, and varied; it's no accident that he's developing into a percussion star.

I also love the fact that Staticflow has chosen to concentrate on original material, but the group is clearly still developing its songwriting skills. They've mastered the art of laying down great grooves for verses, but none of the songs has a particularly memorable hook. Eliza and The Less You Say come closest, but on Go My Way, one of the album's most promising verses collapses into a musically nonsensical train wreck of a chorus.

Also, for such a short album, there sure is a lot of filler on here. Baumgartner's VP showcase, The Fill, is not particularly impressive; his prowess is much more on display on the real songs. And a serviceable-at-best cover of Evanescence's My Immortal should have been relegated to Staticflow's live show.

Aside from tightening their songwriting, as I have no doubt they will, there are a couple other measures Staticflow should take if they're really serious about making it big. (The Washington Post has already recognized their huge potential.) I fully sympathize with the democratic impulse that rules most vocal bands, but for branding purposes they should pick one or two main, though certainly not exclusive, lead singers. Were I the group's manager, I'd choose the gutsy Eric Olsen and the gorgeous-voiced Lauren Chrissos over Jeremy Goldman and Andrew Callard, whose pipes are a little thin. Also, though the arrangements are beautifully layered, intrusive syllables like "doo-zay-doo" and "skibbity-bop-skibbity-bow" won't encourage airplay; they label the music firmly as "a cappella", rather than "awesome pop that just happens to lack instruments".

This is one of the most promising debuts, a cappella or otherwise, I've heard in a long time. Bravo.