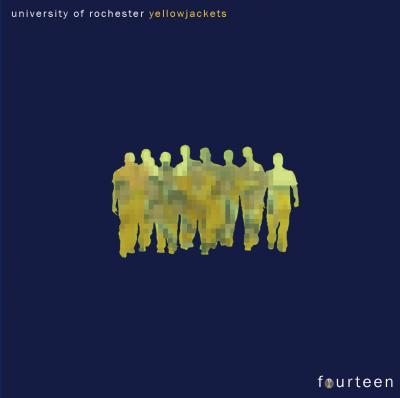 Time warp time! The University of Rochester Yellowjackets' Fourteen sends me back 10 or 15 years in the acappellaverse. Retro singy sound! Low-fi production! Bouncy '80s-type tunes! Plus some familiar faces: the Yellowjackets have been on the scene for a long time and their new album shares its name with a Tufts Beelzebubs album from the Deke Sharon years.

Funny thing about the Yellowjackets — they've been sending albums to RARB since 1996, which was my second year as a reviewer. That's seven previous albums, and I never heard any of them. Yup, that's right, ships passing in the night. In 1996, RARB only reviewed nine albums, and I was involved in every single one except the Yellowjackets. How weird is that?

Anyway, I feel like this album is making up for lost time. Besides that — well, it's pretty average, which is to say well behind the state of the art. Still, it's higher energy than a lot of the overproduced crap out there, so that's a good start. It has the good sense to front-load the album and put the weak stuff at the end, which always scores points with me. Also, this incarnation of the Yellowjackets appears to have a bona fide ace in Dave Marvin. He delivers a star turn out front in And We Danced and also has a nice interpretation of Hear You Me. And he arranged all the songs but three. One of those exceptions was Insomniac, the work of Andrew Hamada and Ian Koff. It's actually a nice little arrangement, and blessedly different from the Virginia Gentlemen workhorse that's been making the rounds since my days in the college scene (1990-95, for anyone counting). The solo's a bit broadway-baritone for my taste, but I did enjoy the arrangement very much.

At the end of the day, this album will have to be relegated to the yearbook category for most purposes. Still, it's fun to listen to, and I bet it was fun to make. I can think of a lot worse reasons for a record.

When I received Fourteen, the newest CD from the University of Rochester's Yellowjackets, I had high hopes. Truth be told, I have only heard them on BOCA ‘98, but that track had me expecting some simpler arrangements tuned really well and sung with some nice college boy charm. Unfortunately, what I got was an album riddled with tuning problems and lackluster soloists. Years ago, this CD might have been passable, but these days, it just doesn't hold up.

The biggest issues with Fourteen are the tuning problems and the weak soloists. Chords not only don't lock, but they are too often severely out of tune. Insomniac is the earliest track to present major tuning issues, and there are painful moments throughout the disc.

Soloists exhibit as many tuning issues as the backgrounds, and they don't bring much to the table as far as warm tones and emotional commitment. Ed Bender has some nice moments on Trace Adkins' I'm Tryin and Jason Rotoli gives us the only one of the many falsetto moments that doesn't sound way outmatched on Somebody Else, but that's about it for noteworthy solos. Also, why are these tracks buried at the end of the disc? If I weren't reviewing the disc, I wouldn't have made it that far in the listening process.

The production is mostly invisible, which is fine by me, though there are a few moments (And We Danced and Hear You Me to an even greater extent) where there is some seriously distractingly long delay added to the solos.

I don't enjoy simply harping on problems with a disc, especially when I know how much work goes into putting out an album, but there's just not that much on this album that grabs my attention in a good way. I can only hope they spend more time nailing the fundamentals before going into the studio the next time, but in the meantime, I have to recommend leaving this one to the family and friends.

In the late 1990s, the University of Rochester Yellowjackets were one of the top college groups out there, releasing two bona fide classics in Wilson Boulevard and Common Time. The next two, Visions and Darwin's Gambit, were not as strong but still respectable. On the other hand, their last album, Nature's Call, was the most grating, headache-inducing, unlistenable mess I've ever been asked to review, and I got in a lot of trouble for a scatological pun on the album's title. Fourteen represents a marked improvement and, one can hope, the beginning of the Jackets' resurgence.

Continuity of leadership appears to have been the key to the group's relative success. As a sophomore, Dave Marvin directed the group responsible for Nature's Call. I suggested in my review that a lot of their problems that year might be due to his being essentially a rookie. Sure enough, Marvin stayed at the helm for two more years, and his arranging and directing skills grew significantly. Gone are the whole-note block chords and cringeworthy syllables, replaced by subtle, textured charts that retain the Yellowjackets' trademark naughty, lighthearted touch. (One suggestion: write higher baritone parts. Basses need a fifth to an octave of breathing room to avoid a muddy sound. Oh, and the "touch-a-la-touch-me" stuff in Sweet Caroline doesn't work.) The upper voices are now blending, and intonation, though still somewhat spotty, is much better. Marvin also developed into the group's best soloist; his emotional reading of Jimmy Eat World's Hear You Me blows the ueber-boring original out of the water.

It seems that the problem throughout Marvin's directorial tenure was, and it pains me to write it, that he didn't have a lot to work with. Most of the Yellowjackets simply aren't very good singers. Solo after solo on this disc is sung with an ugly, stiff tone and hangs onto the pitch like a mountain climber desperately grasping a cliff with one hand to avoid plummeting to his death. Only Marvin, Brian Resnik, and Jason Rotoli manage better than that. When one hears them as soloists, one is better able to understand the group's foghorn bass section and the upper voices' intonational inconsistency. Marvin as director deserves tremendous credit for coaxing decent performances out of this ragged bunch.

As for production, the bad news is that they're still using OhmCo, the studio that botched Nature's Call. The good news is that OhmCo did a much better job this time. Voices sit more comfortably in the audio spectrum, no longer trying to elbow one another out of the way. Only one soloist, Rotoli on Running Away, gets buried. Those horrid basses, usually mixed extra-hot-'n'-annoying on Nature's Call, are inconspicuous here. But the overall sound is still thin and cheap, and I would still encourage the 'Jackets to go studio shopping for their next disc.

The Yellowjackets have too good a reputation to be attracting such weak singers, and I hope they fare better in future auditions. They're doing just about everything else right after a period of decline, though, and they should keep up the good work.

To order an album, please visit the group's website.