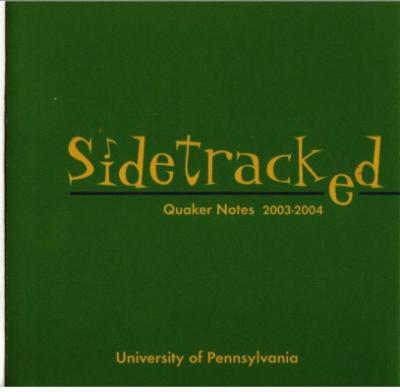 Before I started typing my review of the Quaker Notes' Sidetracked, I took a quick peek at the RARB reviews of their most recent previous album. I was struck by how closely the shortcomings mentioned in the review of Siren can be applied to this latest one. Many of the reactions penned by my colleagues Tom Czerwinski and TeKay were so appropriate to Sidetracked that I felt it necessary to simply utilize the "Copy — >Paste" feature by using the shortcut key "CTRL-C" and "CTRL-V," respectively. Hopefully I can flesh it out a bit so that the Quaker Notes won't suffer from complete deja vu. All over again.

The best thing going for the Quaker Notes is their depth of soloist talent. — Thomas King

Indeed, the soloists are the best thing about Sidetracked. Unfortunately, they are also the only consistently good thing. The leads have plenty of charisma, energy, dynamics. Overall, the voices are well-suited to the styles of their respective tunes; only a few tunes could have been raised a couple of keys so that the lead could more solidly pump out the low notes originally sung by men. Particularly impressive is Mariesa Lopez-Buhl's confident, robust take on the oft-covered Ghost by the Indigo Girls. Hers is the best rendition I've heard of this tune. I will probably add it to my regular playlist.

But all these positives are overshadowed by poor tuning. The problem is that the tuning is never atrocious. It's slightly off the entire time. It's like instead of being stung by one big bee, you have a swarm of gnats around your head all day. Very few chords lock, due to any number of reasons: different vocal placement, non-matching vowels, and varying degrees of breath support — Tom Czerwinski

Yes, Tom, well said. I especially enjoyed the analogy with the gnats. The soloists sound so big and good, but the backgrounds sound so small and lifeless. Tuning is truly the fundamental issue with this disc. Then again, tuning might be easier if the arrangements were more conducive to blending. I suspect every track would sound fuller if the arrangements were more cohesive and less heterogenous. If there's one thing the backs are not, it's tight. By and large, they are overly busy and purposeless.

One thing that has not been mentioned is the importance of solid vocal percussion. One of the most notably lacking aspects of the disc is an audible, steady beat. The percussion is mixed very low relative to the other parts. The kick drum has almost no presence and the sounds are very rudimentary. The Quaker Notes can improve their recorded sound dramatically by placing a greater emphasis on the drums.

I have not heard Siren, but from the looks of previous reviews it would appear that the Quaker Notes have not exactly made another "gallant stab at becoming a part of the royal court of female collegiate a cappellaists" (Tekay) with their latest release. In fact, they may have taken a small step backwards. Unfortunately, Ghost aside, the album does not fall into the recommended category.

Sadly, the Quaker Notes, an all-female group from the University of Pennsylvania, have taken a turn for the worse with their latest effort, Sidetracked. Without fixing the tuning problems of the last album they have lost many of the compelling elements of their last release, Siren.

The album is speckled with pitch problems. This is especially true when transitioning in and out of bridges, such as in Harder to Breathe and Clocks. Harder to Breathe, despite being the track with the best energy, fares worst pitch-wise. There isn't a chord on the album that truly rings with tonal clarity.

Soloists are touch-and-go this time around as well. While most soloists bring energy and flair to their efforts, few have the vocal chops to actually sing the piece. Notes are sloppy and intervals are imprecise, while some soloists are out of their ranges. David Duchovny is the worst offender, while Dancing Nancies stands out as the best solo on the album. Even sloppier, however, are the duets. Duet partners are rarely in sync with their soloist, either in tempo, timbre, interpretation, or vowel production. Unfortunately, soloists hamper otherwise solid songs.

Arrangements are still solid. This is impressive considering the numbers of arrangers on the album. They tend to be repetitive and formula-driven, however: floated descant with syncopated rhythmic middle parts, leading to an overall monotony. I would like to see the girls venture from this comfort zone, as they certainly have the talent.

Production is mediocre. The sounds have fallen victim to heavy compression or poor mastering, leaving a deadpan presentation that doesn't leap out at the listener. I was also irked by the kick drum in Clocks, which in its overpowering presence and constant repetition reminded me of someone attempting to throw up. Distortion is effectively used on Control and Taking Over Me. Overall I think the CD could stand a few more bells and whistles, or alternatively, a treatment that allows the voices to really ring.

Overall, this is an uncompelling and average album. Many of the elements for a stellar album are there, but they didn't gel. With some more pitch work and a better recording I think the next effort could be much better.

Bit of a step back for the Quaker Notes, who have released a nice album that just doesn't stand up to their previous one. The voices are still nice, but the songs on Sidetracked rarely gel.

Tuning is my biggest beef. The album opener, Harder to Breathe, is the only song that really offers a cohesive sound. The rest of the disc sputters and never comes back to even that benchmark. Most of the songs have a decent premise, a few flaws, and no offsetting plusses. For example, none of the solos wow, though most are reasonably strong.

Clocks is particularly dissonant; its faithful arrangement of sustained pitches sinks quickly and stays submerged. This crop of Quaker Notes doesn't have the precision to record this tune, and the principles missing here are the same ones that weaken most of the rest of the disc. It feels like the group isn't listening hard enough, isn't taking the necessary care to keep the song in line. Likewise, Bright Lights shows some passion but drops enough details to put a big dent in its effectiveness. The whole album seemed a little ragged, not up to what I felt this group could do.

All in all, this is a yearbook album for the current incarnation. Maybe next year will bring back some of the magic.