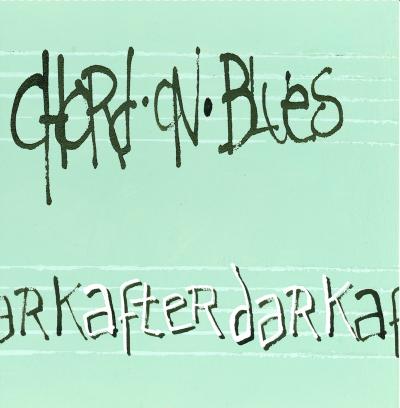 Chord On Blues' Afterdark would probably only have earned a C+ grade had it been released about the time that I was Penn. But in the intervening 11 years, collegiate a cappella has come a long way while the Chords — at least as evidenced by this album — have not.

The praises I can offer are few: the energy is good and the guys sound like they very much enjoy what they're singing. With Catch Her, the guys take a chance on a foreign language pop song and they're to be commended for being risk-takers in that regard. When opportunities for slightly more formal singing are available (Lonesome Road, Sound of Silence), there are hints that this group might have more to offer with less hard core material and better-crafted arrangements.

But overall, it gives me no pleasure to report that this album is really a mess:

Repertoire — is all over the map, careening wildly from Simon & Garfunkel to Linkin Park to James Taylor to Metallica to The House Jacks, and even the best of groups have trouble singing everything well.

Arrangements — What I imagine were efforts to put new twists on existing classics typically fail: a sedated Nothing Else Matters lulls rather than excites. Sound of Silence with a power rock beat for the 2nd half is just too heavy-handed.

Rhythm/VP — Background vocals are often not in sync with VP which periodically is also not in sync with the soloist. The VP itself aspires to be complex but the sound palette consists primarily of variations on hi-hat and snare with nary a truly effective kick drum to be found, thereby rendering lifeless otherwise halfway decent arrangements like that for The Cars' Just What I Needed.

Tuning — is scattershot throughout with the first tenors being the most egregious offenders though in their defense, the arrangers often call upon them to sing notes they just don't have except in a fragile falsetto. Even more inexcusably, there are blown notes in a number of the solos, even when the song isn't unusually range-y.

Blend — in the uptempo songs is sketchy at best where generally, the more movement in the vocal lines, the more the blend suffers. The sound is more of 4 or more separate sections rather than as a true ensemble. In the slower songs, or when block chords are called for, the results are a bit better but the blend is often undermined by the aforementioned spotty tuning.

Production — which might have masked at least some of these flaws, is just plain sub-par. Lord knows, I prefer a cleaner, less manipulated sound, but even someone mildly proficient in ProTools could have done a lot of cleaning on this album that would have helped immensely.

In a nutshell, it's not a complete disaster but it ain't very good. As a Penn Quaker myself, I'm hoping these guys can and will do better next time.

If anyone is not familiar with the NBC-syndicated reality show by the same name, the concept is that six women are given a chance to "start over" by combating and correcting issues that they have in their lives in order to move forward to a more productive and positive future.

The show's premise is an apt description as to what I wish the guys in University of Pennsylvania's Chord on Blues could do with their newest recording Afterdark.

Let's just forget that this one happened; it was a trial run, now the group can actually go back in the studio and make a real recording.

Think of me as the Iyanla Vanzant (the sassy life coach on the show) of RARB, helping the group help themselves.

Liner Notes: Next time remember to include soloist and song information in the liner notes. Remember to add contact information so that people who may want to book Chord on Blues for a gig after listening to the album can get in touch. Acknowledge percussionist(s), he/they is/are the best part of the album and that/those guy(s) need to be given credit. The harmonists as well, but who cares about them?

Music: Make sure there is ample rehearsal time to lock down parts, learn better phrasing technique and work out blending problems. Establish a sense of controlled emotion, engaged rhythm, dynamic range and relevant energy to imbue a since of purpose in the songs. In other word, perform! Make sure the arrangements highlight the talents of the group and not aren't done (or copied) simply because the original song is cool. Make sure the soloists are paired with the right songs. Some of the guys are killing their chords singing songs they shouldn't. Rethink singing up-tempo numbers at a snail's pace or ballads in less than 60 seconds.

Production: Hire a professional producer. Someone with strong technical capabilities had to have been involved while recording Afterdark because the enhanced percussion is usually spot on. Even the more organic stuff is given some love and attention. Why not have whoever was in charge of sequencing the percussion devote as much attention to the singing as well? Not all parts are created equal, blocks aren't as important as soloists. Since according to Motownphilly there are only 10 singing members (I see only 9 in the photo, another liner note correction) have at least 10 tracks per song. Ain't nothing wrong with a little bit of artificial dynamics if it's going to help the musicality of the song. Auto-tuning is a godsend when the capability isn't there to do it live. Create an aural soundscape that doesn't make the group sound hollow and uncentered.

As the recording stands, to quote Ticket to Ride: "I think I'm gonna be sad." No, I know that I am. And you will be too if you buy this album. One can only hope that starting over will give these guys a new chance at making music.

It's clear that the men of Chord on Blues are having the time of their lives. Their audible joy and zeal reminds me why collegiate a cappella is so important and permanent. So I hate to rain on their parade, but this album should have stayed within the Chord on Blues family.

I might as well start with the most damning information: this entire album is out of tune. But the delivery is strong and confident, which tells me that the members of Chord on Blues are either tone deaf or completely aware that they can't sing and also don't care. Either way, it's hard on both the listener's ears and psyche. Motownphilly is an embarrassing start to an album that will evoke both pity and introspection. How is it possible to actually sing more wrong chords than right ones in fifty-four minutes? Isn't this harder than just singing the right chords in the first place? And so the real criminal of Afterdark is finally arrested: these men are working way too hard.

Each member has so much gusto, so much go-for-the-gold, that it has to be impossible for them to hear their severe intonation problems. There is a strange internal competition with no trophy in sight. These men are strong-arming each other like athletes. Technically, they could get a 5 for the Energy/Intensity category, but since their efforts only hinder the album, a 5 would be unjustified. Their race is particularly intense on Wasting my Time and Hallelujah. All this comes to a head on Catch Her, the worst track I have ever heard. And I don't just mean that Catch Her is the worst a cappella track I have ever heard — I mean it's the worst track I have ever heard, period. This song is going to haunt their reputation for a long time, costing them more than their Ivy educations.

The production caps off the dismal journey that is Afterdark. The sound levels are uncontrolled and startling. The whole work is quite comparable to a radio station signal that is losing strength as you leave town — soft and fuzzy on the outskirts, followed by unpredictable noise bursts on the freeway. I couldn't hear anything when the first verse of Just What I Needed kicked-in, so I turned my dial way up. When the chorus hit, my speaker blew. Sometimes the guys are too close to their microphones, sometimes they're too far away. Sometimes the soloist is overpowered by the support, sometimes the percussion makes the line crack. I understand that the members of Chord on Blues can't take full responsibility for their voices. After all, you've got to work with what you've got. But their botched audio job could have been prevented.

We've all heard high-grade albums come from the University of Pennsylvania, so clearly someone in town knows what they're doing. Consultation and collaboration might be the only way for Chord on Blues to save themselves.

To order AfterDark, write chordonblues@gmail.com or visit the group's website.