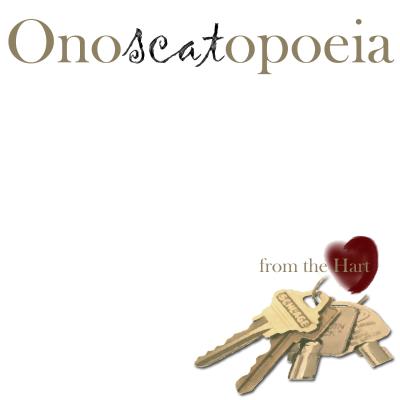 Except for leading off their debut album with a juvenile choral rendition of I Want You Back, the University of Toronto's jazz choir Onoscatopoeia (Onoscat for short) is outrageously good.

And that's the problem.

Technically, I can't find a lot to fault the group; what they do, they do well. Tightly blended voices that are as creamy as any smooth jazz you can wish for, a nice buoyancy in the upper voices that never overpowers, pinging rhythmic work like crystal clear bell tones in an autumn breeze and warmly lush chords that can't be learned, only innately experienced. They are skilled musicians who (with the help of Cadence's Dylan Bell as their director and vocal percussionist) live each song, each phrase, each note. 59th Street Bridge is the perfect example, I was driving down the street listening to this tune and their soundscape washed over me and just mellowed me enough to forget my daily trials and tribulations for a moment. Onoscat, I THANK YOU!

And then you realize that each track sounds nearly the same -– the same choral blandness that denies any life or mystery to the track. The sopranos are guaranteed to give a whisper soft lead; that is, when the lead isn't inexplicably shared by several people. Human Nature is by far the best track on the album, and while both soloists are fantastic, you have to ask why they split the solo. I can also explain my production score for this reason. Two of the tracks, Brown Eyed Girl and Human Nature are reversed, something that should have been caught in post-production.

It is interesting that the group chose to close the album with Gabe Rutman's CARA award-winning track of You Gotta Be. The sound and arrangement is so irrevocably tied into the Off the Beat sound for me that by the time the tenors got to the "wanna na na, wanna na na, whoa-oh-oh" bridge, I didn't know if I wanted to laugh or cry. While Onoscat sang it well, to me, it wasn't a song for them to sing in the first place, at least in that arrangement.

From the Hart is a good album, especially if you dig a nice jazz choral sound on some pop standards.

When I saw Onoscatopoeia's new album show up in my mailbox, and saw that they were from the University of Toronto, I automatically felt bad for them. After all, who could follow in the footsteps of Wibi(jazz'n')? And Cadence, even though professional, sets a terribly high bar for any jazzy vocal group in the area.

Then I opened up the album, and saw the pedigree, and thought, "maybe there's some hope after all!" After all, two of Cadence's geniuses, Kevin Fox and Dylan Bell, contributed to From the Hart. Dylan Bell even founded the group, and still directs it in between singing with Cadence and getting nominated for a Juno (the Canadian version of the Grammy) for best recording engineer. So surely Onoscatopoeia's going to do something right.

And they do. The songs are tight, and have a TON of great energy, throughout the album. This is a group who loves singing well, and has every reason to – the CD sounds awesome. For a 21-member group, the album sounds surprisingly intimate: individual voices rotate to the forefront, and all hold up their part of the bargain. The (very) rare tuning mistake just serves to highlight how good the tuning is in the rest of the album.

Why just a 4, then, you ask? Why does this excellent group not deserve a 5? Well, for starters, only one of the arrangements on the album is by an actual group member. The rest, all by musicians who are now pros in their field (Anders Edenroth of Real Group, Gene Puerling, Kevin Fox, Cadence, Gabriel Mann, and three by Dylan Bell), are outstanding, of course, but lead me to question whether Onoscatopoeia could have pulled something like this off without them.

Which brings me back to Wibijazz'n', the "other" Toronto group, who DID pull it off, and whose In The Pocket is still easily the best college a cappella album I've heard. Sure, it may be unfair to compare groups with other groups, but this is as close to apples-to-apples as it gets. And it seems as though they asked to be compared to Cadence when they pulled two of Cadence's arrangements (Feelin' Groovy and Brown-Eyed Girl). I listened to the originals and to the Onoscatopoeia versions, and the latter group just doesn't come close. Yet.

It's clear the group has it in them to be out-of-this-world good. But the members will have to take the group on their own shoulders, and do more of their own work; use Dylan as a director, not as a do-everything-besides-sing-all-the-parts man. Taking more responsibility will prove that they're not trying to be just another vocal jazz group, but rather that they're putting themselves on the line in order to be the best.

I truly can't wait to see what they have in store next, but for now I'll keep listening to Cadence and Wibi.

An average debut album with some treats at the end, From The Hart offers a varied track list for a jazz choir, but a sloppy final product.

The undermining, persistent problem on From The Hart is the rather chill, laid-back approach the jazz singers take, which sadly translates into listlessness. I know, one expects jazz to be chill and laid-back, but it just doesn't jive with a track list like this. I Want You Back should not be sung in a holding-hands-at-camp manner. I expected my speakers to burst from all the Jackson Five excitement. Alas, they remain intact and I remain disappointed. Chili Con Carne suffers the same fate and includes some rhythm problems, and My Romance is so weak and messy that "cold" is a better descriptor than "chill". I advise Onoscatopoeia to listen to Pieces of 8 for appropriate jazz energy guidance. Also, the blend is rather jarring on this album, with individual voices slipping out of every seam and a blanket studio production fuzziness coating what should be lush and readily present.

I'm happy to report that the last tracks of From The Hart are solid, compelling offerings. Though it should be noted that there's a liner note boo-boo, with Brown Eyed Girl playing before Human Nature on the actual album, despite Brown-Eyed Girl appearing after Human Nature on both the liner notes and the back of the jewel case. Oops. But moving on to the praise, Human Nature has an intensity not heard on prior tracks, with an interesting, dynamic rhythmic arrangement for the singers to dig into. Onoscatopoeia puts a refreshing spin on For What It's Worth, and You Gotta Be has real movement, growth, expression and sensitivity, showcased for the first time on From The Hart, with a gorgeous vocal percussion foundation for support. Definitely a strong, fun finish.

I really enjoy hearing international albums. It's nice to know how much we all dig a cappella in this crazy world. I hope Onoscatopoeia's next work offers a cleaner, feistier sound that I know they're capable of.