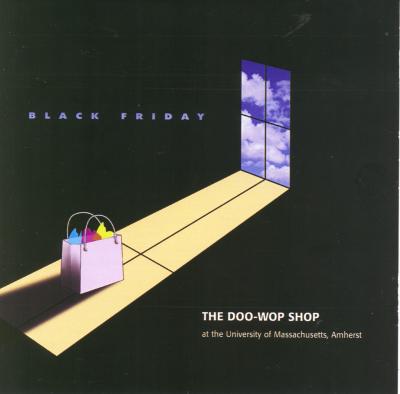 What's in a name? Well, in the case of The Doo-Wop Shop's first studio CD Black Friday, not that much.

That's not intended as a comment on the quality of the CD, but doo-wop this most certainly isn't, and as for Black Friday, they lost me.

But I shouldn't get too caught up in semantics — except to point out that while we're on the topic of words, I was a little perturbed that the group, performing solely covers, didn't bother to credit the original artists anywhere in the liner notes. This bothers me not only on principle, but even more when your opening two tracks are by Taxiride and by Thicke ... some of us old folks need a little help recognizing the source material.

Of course, all of this would fall by the wayside for me if I had just gone bananas over this CD, but despite its pedigree — tracking, editing and mixing by Ed Boyer and mastering Marc Soucy and Tat Tong — this is an effort that, both as a whole and in parts, starts strong, fades, and finishes weakly.

All of the tracks on Black Friday are arranged by the group's musical director Cooper Cerulo, and as I've often seen on other one-arranger albums, this is a mixed blessing. Cerulo has a talent for creating solid grooves for the uptempo songs that grab the listener's ear right out of the gate. That's a plus. But with only one arranger, his weaknesses become pervasive throughout the album, and that's a big minus. In Cerulo's case, it's a failure to develop his arrangements at all beyond the initial established groove. Just Like Heaven had me nodding with a smile, but two minutes into the song with virtually no variation to the background drone, it had me nodding off to sleep. Ditto for Father Figure, which has been done to death and needs either a much more virtuosic solo or a novel approach to the atmospheric background to sustain my interest. And while I'm at it, ditto for 25 or 6 to 4 whose groove never quite gets off the ground with horn licks come off as just plain cheesy. It's a shame really because Cerulo definitely understands the foundations of a good arrangement but he just doesn't seem to know what to do to expand and develop them so that they become exciting rather than just commendable.

Solo-wise, the group does pleasant work but nothing stellar, with tenors occasionally straining a bit for the beltier notes in the higher registers. As if he hadn't done enough, Cerulo turns in the best solo performance for my money, but it's in his underarranged, hypersimplistic and ultimately uninspiring take on Some Kind of Wonderful which I enjoyed solely for the Hammond sound that appears on Can I Get a Witness and my assumption (correct or not) that this was the inventiveness of Senor Boyer at work.

It should be noted that Doo-Wop Shop is a 7-man ensemble that has a studio sound which rivals groups twice its size. Whether that's studio trickery or just great ensemble singing is tough to judge on this CD but it's worth pointing out because this CD — with the possible exception of an overly complex Pure Imagination and the final track which is devoid of any trace of vocal music whatsoever — is not an aesthetically unpleasant listen. Just a rather uninteresting, unengaging one.

It's been rare for me to review a collegiate a cappella group with less than 12 members, so it was quite refreshing to get The Doo-Wop Shop's latest, Black Friday. It was even more refreshing to realize that this group of seven men from UMass was able to match the efforts of what's become the trend toward big, complex sound.

Any collegiate group would be lucky to have a group of such talented members. Everyone has at least one solo which they perform with aplomb featuring good production and good energy. The backing is impeccable as well: crisp, clear, precise, energized, blended, musical, and most importantly in tune. I found the bass to be a bit heavy most of the time, but not grossly so.

The Doo-Wop Shop seems to have melded traditional and contemporary facets of a cappella in a well-proportioned mix. There's much to this group that points toward the traditional glee-club sound. Arrangements sport a strong grounding in theory, but are simple enough to let musical performances — and not arrangement action — drive the album. More traditional sounding tracks like Sleepin' To Dream (complete with hand snaps!) compliment the more updated style of Talking in Your Sleep. Production tends toward natural sounding, though it's obvious the group has taken advantage of modern trappings to deliver a consistent sound and isn't afraid to use some of the bells and whistles out there. In general I found the percussion to be out of sync with the overall feel of the album, and would have preferred a more natural or live feeling to that.

My favorite track on the album was 25 or 6 to 4, though I must admit my love of the original as well. The articulations were incredibly precise and clean, and the group handled the sometimes difficult chords with ease. While the solo wasn't always perfect, you have to admire someone willing to wail that number out. The preceding Father Figure was also tremendous, and were it not for the average solo would qualify this version as the definitive recording of this track for me. I appreciated the sentiment behind the jazzy Pure Imagination but it seemed out of place on the album — especially juxtaposed with I Begin to Wonder.

One thing I always find a need to comment on — not listing the original artist for the track listing. I wasn't familiar with several of the tracks, and this offered me no clue as to their inspiration or even possible originals.

Overall, this is a great album. Those firmly entrenched in the "bigger is better" camp of a cappella would do well to give a listen and reconsider.

All twelve arrangements are offered from the capable Cooper Cerulo, who is also a member of (surprise, surprise!) Hyannis Sound. Normally I'd worry about one arranger, who was also the music director during the album's recording, taking the reins alone for a group. Obviously this would be a very different album if Cooper couldn't arrange as well as he can sing, but bless his heart, he's equally talented at both. It takes a few tracks to get Black Friday off the ground, but it's worth the wait. Just Like Heaven is wonderfully complex and has an awesome solo by Dave Duran. Octopus's Garden will have you smiling from start to finish (even though "Octopus's" is spelled incorrectly as "Octopusses's" on the liner notes). Father Figure is both intense and gorgeous, with a blow-you-away chorus, and Chicago's unforgettable bass line on 25 or 6 to 4 comes through loud and clear from the Doo-Wop Shop as soloist Doug Landry steals the show. The middle section of Black Fridayis as solid as solid can be.

The rest of Black Friday didn't leave as strong of an impression, but I was still wildly satisfied. It's hard to accept a rendition of the Chili Peppers' Otherside lead by a strong musician who, unfortunately, sounds like a sweet choir boy. It's also hard to accept another version of Otherside when The SoCal VoCals left such a huge mark with their exciting rock version. But, the Doo-Wop Shop climbed right back up again with their funky, nearly video-game-music-esque take on Talking in Your Sleep. And how happy was I to hear a high energy, well-done version of Some Kind of Wonderful? So happy, that I sometimes put the darn thing on repeat for awhile. Pure Imagination slips at the end when the blend gets squirrelly, but who cares about that when the last track, I Begin to Wonder, is so hot that it should get required spins at clubs across America?! Now that's an ending.

I consider Black Friday a must-own album. I figure you will, too.

To order this album visit A-cappella.com.