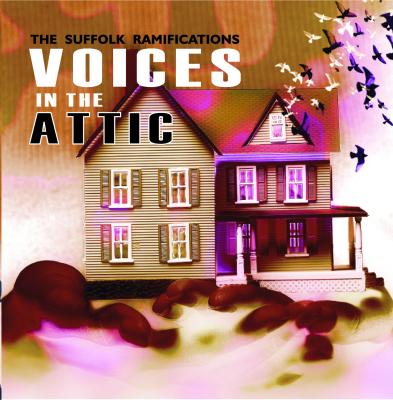 Voices in the Attic from Suffolk University's Ramifications is one of those CDs that really challenges me to review product rather than process, but if you'll permit me, I'd like to examine both.

As a finished product, Voices in the Attic is one of the slicker, more polished debut CDs I've heard from a collegiate group in recent memory. Thumping, octaved bass and sampled VP are becoming something of a staple on the collegiate scene, especially for groups hailing from the Boston area, and though still a bit too inhuman at times for me, they are used to mostly excellent effect here. Not a "clunker" track to be found, but the amount of post-production varies quite a bit from song to song and it's worth noting that the less manipulated the group's sound, the less satisfactory the results.

Arrangements do occasionally rely a bit too heavily on their electronically-enhanced rhythm section and settle for power chords and lush "ooh's" and "ah's" with little in the way of texture other than the VP. But the whole is often greater than the sum of its parts, especially on the uptempo tracks. I did find myself wondering quite often whether this was a mixed group or an all-female-group with a few male basses. Sometimes it's hard to tell behind the processing, but the men feel woefully underused on this CD as much more than bottom notes in chords. Even solo-wise, of the 13 tracks, only 3 feature male solos — a little more variation in this area would have been welcome.

That said, soloists are strong, with Denise Trubia on My Immortal turning in fine work, Christopher Agular showing off his chops on both Every Little Thing She Does Is Magic and Say Goodbye, and Lisa Cronin mixing soul and attitude on the closer Show Me Love (though she is mixed a little too far back for my tastes when she's singing against all of the other ladies).

That's pretty much my opinion of the product, and in truth, I've already let some comments on the process creep through. There really can be little question that what makes this CD as good as it sounds are the hired guns that have been enlisted in the producing, recording and arranging departments. Two tracks arranged by Victor Sandman from the BU Dear Abbeys/Hyannis Sound/Firedrill! (among the best on the CD including the BOCA 2007 Breakaway); a track from Nathan Altimari also of Firedrill!, a track by singer/arranger/producer, former 'Bub Ed Boyer and a track by producer extraordinaire John Clark — that's about half the CD right there (not to mention a few from the group's faculty director Irene Antonellis)! And to boot, Clark produced, recorded and mixed the whole CD with his trademark studio touches (meticulous VP sampling, well-chosen voice processing. interesting and purposeful stereo manipulation, etc.) everywhere to be found in the music. On their website, the group displays the following quote from Deke Sharon: "Ever heard of Suffolk U? The Ramifications? Well, you will now, thanks in part to Mr. Clark." — I'd say this is something of an understatement.

Maybe it's unfair of me to list the above as a negative since I've never heard the Ramifications live. But the level of talent from outside the group that was brought in to work on this CD is so significant and pervasive, and the Ramifications were so unknown to me until I received this CD, that I'm finding it hard to give the group most of the credit for their achievement. How many other groups have I heard — countless — whose scores would have received a huge boost if they had utilized almost exclusively professional arrangements and embraced a "studio" sound with both ears. Indeed, listening to some of the less-adorned tracks such as I Love You Always Forever or the sweet, but entirely uninteresting Down To The River To Pray, you do get a sense of what the group sounds like behind all of the studio wizardry, and the results aren't nearly as impressive.

Nevertheless, as a CD, the Ramifications have done terrific work (it's a very high 4). As a performing group, though, at least for me, the jury is still out.

There isn't much more than I can say. Yet again, a group has delivered a sensational debut disc like seasoned professionals — and I've never heard of them. The Suffolk Ramifications' recording Voices in the Attic is a very pleasant surprise. Spanning a two-year period of the group's five-year existence, the configuration of men and women recording the album results in a sleek and sophisticated sound. This is a polished and professional product — one of which they can be very proud.

Running the gamut of current collegiate styles, the Rams offer a smattering of alt-pop, techno-pop, euro-pop, power-pop and pop-R&B. And the combination works much better than one would expect. The angsty ballads are nicely tempered by the unabashedly optimistic dance numbers.

As a group, these kids can sing! The blend is phenomenal, especially evident in the group number Uptight (Everything's Alright). I always enjoyed singing section-led songs, so the splitting the melody in this Stevie Wonder classic between the tenors and the sopranos brings back fond memories. There is a unified sound though you can hear the individual components. Quite remarkable and intriguing.

Not to say that the album is without fault. The track listing is horrible on two accounts. First most of the songs are mid-tempo (that terrible inclination of collegiate groups). So when you open a disc four tracks that vary slightly less than 20bpm, there's a problem. A dullness forms that's very hard to overcome. All of the energy is sucked out of the experience. It's hard to say how I would shift the tracks that they've offered, though Uptight and/or Move Your Feet would have been earlier. And I know, ending with an Ed Boyer (The Bubs/The Hyannis Sound) arrangement should be a no-brainer ... but his Show Me Love doesn't pack the punch needed to close out a CD. Unintentionally trailing off into nothingness isn't the last impression you want to leave with your listeners in closing a recording.

Which leads to the second account. I'm going to preach! With a co-ed group, there should be a better parsing of male and female soloists. Here, out of 13 tracks, three of them feature the male voice on lead, two of those tracks are the same guy and one is a group number. The album has a noticeable lack of male presence. While not being exactly treble-heavy, a lot of the tunes seem more like a girl's group using an octaver/octavizer.

Occasionally, there is a disconnect between the quality of the soloist and the production values. Such Great Heights and Goodnight and Go are prime examples. The arrangers and producers have created a supremely glorious sonic palette on which the soloist could have been catapulted into stardom. That's how great the background is on these two tracks. I wish I could adequately describe how captivating the arrangements are. The pinging stereo ... just wow. John Clark has done an amazing job.

I wholeheartedly recommend this CD. Voices in the Attic is a wonderful addition to the a cappella canon.

The sound on Voices in the Attic is fuller than a stuffed thanksgiving turkey.

And it is indeed the sound production that makes the Ramifications' debut album the best debut album I've heard. I've been hard on John Clark in the past. I've scolded him for creating instead of enhancing. But it's hard to be unhappy when his work here is both groundbreaking and unforgettable.

Clark's talent is immediately present in Breakaway, with crystal-clear, vibrant vocals that stun the listener into wonder. Such Great Heights is a shiver-worthy digital orchestra of production, wholly unnatural yet audibly irresistible. And his treatment of 80s powerhouse classics is absolutely standing-ovation worthy. Against All Odds and Every Little Thing She Does Is Magic are rather like the best rides at Six Flags — you'll wait an hour to experience them, and you'll run to the back of the line as soon as they're over. Man do I love these songs. Clark also wins my cheers with strikingly unique Goodnight and Go, and fabulous Move Your Feet, which opens in an urban street style before transitioning into the party of the year. Add these marvels to gorgeous album art and you've almost got the total package.

Almost. While the Ramifications are making strides toward the professional level, a few areas fall short. When you set the bar this high, anything less than stellar is twice as noticeable. The background vocals are superb, but a few soloists are shaky (with the huge exception of Christopher Aguiar, who definitely holds up his end of the deal). Oozing-with-potential My Immortal flops with its super slow tempo, refusal to go anywhere, and soft jazzy percussion that is as random as its entrance into the song. Down To The River To Pray also sticks out for being too ordinary.

But, my complaints are short, and my praise is high. I love Voices in the Attic. It's a sure-fire buy for your collection.