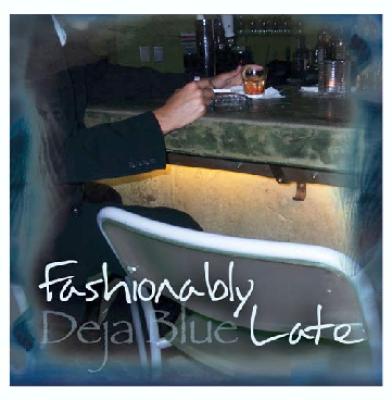 Deja Blue's Fashionably Late draws the listener's attention most strongly to the combination of arrangement and mix. In collegiate a cappella this is an especially difficult balancing act: arrangements are frequently called upon to serve the dual and often contradictory roles of (1) filling the unamplified live concert hall and (2) simultaneously sounding honest and sonically rich under the intimacy of the studio's microscopically attentive mics. It's a Herculean task and one has a hard time faulting Deja Blue for their failings. But to be honest, Fashionably Late has trouble harmonizing these two worlds and this reviewer had a hard time getting past it.

Whether true or not, the album sounds like a proud second soprano arranger mixed it. And by that I mean that backgrounds, back-up syllables, and generally unimportant parts are consistently mixed too loudly for my tastes. In the rare cases of homophony, the mixing choice is not fatal. But since the majority of the album consists of very active, and to my ear overcomplicated, arrangements, there are a significant number of times when leads just get buried (Criminal's opening; You and I Both; Tell Him's opening; Let Go and Summertime). Is this a deliberate cover-up? Intonation errors masked by mults and a soft mix? Hard to tell. But the result is still a lost lead as compared with the unimportant "jin-jin-jah-jiggy" and "dohs" of would-be backgrounds. It brings repeat listenability to the very bottom of the average rating and engenders some frustration. After all, even perfectly sung back-up syllables, when thrust into the spotlight are an awkward listen at best.

The generally smooth if not aggressive production often reveals a studio trick or two to bring interest and slickness to the texture whether through a string, guitar or vocal percussion sound. Interestingly, we seem to be treated to these rather sparingly in any given song. They're great sounds, even if oddly rationed.

Most of the song choices are good ones. In particular, La Belle Et Le Badboy/Zara Zara brings the lead volume up just a notch compared to the other tracks and though it remains too low for my tastes, it's loud enough to appreciate some of the phrasing subtleties. It's also the best vocal percussion of the album and the CD's most exotic flavor.

Some leads aren't quite up to their assigned challenges. Sometimes the energy or dynamics seemed a tiny bit anemic. But despite its failings, this is an album that fans of Deja Blue can still easily appreciate: very few clunkers, very rich textures, quality production, great song selections. I can't recommend this release for the community at large, but there's plenty to please the home crowd.

I continue to be amazed by the productivity of Duke's a cappella groups; they churn out albums like a factory and they are almost all of decent quality. The all female Deja Blue's latest — Fashionably Late — is no exception.

Fashionably Late is decent but not spectacular. On the plus side, it is one of the most creative album I have heard in a long time. Some of the song choices are highly original, such as Lauryn Hill's Tell Him and a foray into foreign music with La Belle et Le Badboy/Zara Zara. Many of the other tracks are standard fare, but arranged in a completely new way from the original. This album strangely reminded me of the Swedish group Riltons vänner with their album Har Ar Passion. Everything is slow to mid tempo, has a slick groove sound, and sounds too much like it is trying to be cool. Unfortunately the end result is boredom. Bottom line — Deja Blue has substituted creativity for energy. Maybe the album is ahead of its time and my simple ears can't keep up, but the sound didn't work for me.

The disc opens with a version of Criminal which despite being the strongest track on the album sounds like it belongs on an ambient soundtrack for Nip/Tuck, and Frou Frou's Let Go is haunting but stark, weak, and difficult to pay attention to. The album ends with Your Love, a track pretty much guaranteed to get me pumped in about 30 seconds, but its laidback feel had a lackadaisical effect on me. The low point came with Tell Him which, despite its originality, was a horrible track. It's the same two measures repeated for four and a half minutes, and helped me through a bout with insomnia.

Equal blame for the lack of energy lies with mixing and production. There's little to tell that humans are singing at all. Nuances such as dynamics and crescendos seem electronically added. Pitches, blend, and notes are honed to perfection but lack any sort of emotion. I would love to hear these girls sings, but they always seemed to be constrained. The result is an album I would play in the background at a party, but would never be a choice for something I would actively listen to.

Something else Deja Blue needs to work on is the quality of its soloists. Katie Lee on You and I Both is almost impossibly nasal and strident, and just gets worse with each repetition of the chorus. Sonali Hippalgaonkar also falls short on Summertime. Both Criminal and La Belle have decent solos, but sound heavily processed and unnatural.

I didn't much care for this album, and it deals less with talent and more with the artistic choices the women made. Maybe I'm wrong and the world will later look back on Fashionably Late as a watershed moment in a cappella, but for me it illustrates that an album can sound too slick, too processed, too "cool". I think these women have talent, but until I actually hear them sing, I reserve judgment.

Fashionably Late is an interesting business card for Liquid 5th Productions, but Deja Blue certainly has work to do.

Fashionably Late opens with a force of potential. Your head will snap up with big bang opener Criminal. Are these girls the next powerhouse group? Listen to that slick beat, that luscious blend, that full sound!

Things go sour fast. It's pretty hard to gauge what Deja Blue sounds like without this excessive coat of studio makeup. But the soloists and arrangements can be accurately evaluated: they both add to a pretty lackluster album, with quiet leads, and arrangements that hover around a midtempo with seriously repetitive lines. So repetitive that I'd bet the little sisters of these girls could learn these parts in a few tries, certainly on You and I Both, Tell Him, Summertime, and Come Away With Me. I'm surprised Liquid 5th's lipstick and blush made such a dull final product.

A refreshing work on the album is La Belle et Le Badboy/Zara Zara, with its striking moodiness and mix of languages. It shows a better side of Deja Blue: a risk-taking, distinctive side that I'd like to hear more of. Deja Blue must strive for more of this creativity, more surprises in their arrangements. A push back to the natural — with the bold, confident female kind of natural that doesn't need artificial treatment, and tight mouth drumming that doesn't require much construction — will create a sound that's uniquely theirs without the heavy production. More fire and more uptempo tunes wouldn't hurt, either.