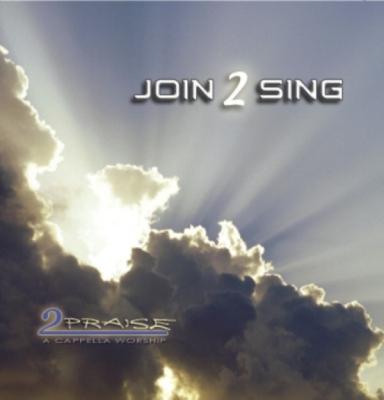 2Praise: 5(ish)-parts ("ish": all parts are sung by two singers), all-male, 99% a cappella, partly-modernized Christian hymns sung in rock-influenced straight -tone, computer edited to rhythmic and pitch — near-excellence (it's perfect until some weird artifact or warble pops through, then back to perfection). 2Praise delivers nothing if not a margerine-ly smooth sound, but though their production would technically be called warm by engineers, their delivery left me cold.

The rich studio production obviously covers up for some inexperienced singers, as their shallow tone color and alternately heavy-handed or absent phrasing reveal. But even at their best, perfectly (if artificially) blended and tuned chords don't, without more, make for an interesting listen (except perhaps for those whose passion for Christianity is such that all "Good News" is a good listen. But for them, the title should be enough; who cares what the review says.). Despite the passion the singers must feel for the topic of their 13-track glorification, 2Praise comes across as marching diligently through arrangements to which they feel no particular connection. Chords set to words of praise are only building blocks.

Whether through the engineer's hand or the singers' limitations, listeners are never given an emotionally vulnerable lead to follow along a dramatic journey. Everything sounds like a part of a wash of silky smooth back-up vocals. By choosing a pop-rock-influenced tone color, rather than a more traditional choral tone, 2Praise is asking to be listened to in a manner consistent with the choice. But the believability of what's performed, unlike many of today's Christian a cappella performers (much less the Universe of pop-rock performers as whole), never leaves the restraint and formality of the choral realm. The result is a creation that's best suited to (pardon the pun) preaching to the choir. If you're already converted to being a fan of 2Praise, then Join 2 Sing won't disappoint. It's easy on the ears, and sonically rich. And the album is incredibly consistent; if you like track one, you'll like all 13. But for mere fans of the genre, there are more artful and expressive choices.

By their own admission, Jeremiah Savage and Nathaniel Vossler — together 2Praise — started Join 2 Sing as an experiment in recording and overdubbing vocals. With the encouragement they received for their work in progress, the project evolved into a full-length CD.

Pity then, that for an album of deeply religious, heartfelt music, with truly noble intentions, I listened and felt relatively uninspired.

It's not that these gentlemen don't pour their souls into the music — there is a palpable joy in their worship and one can't for a second doubt how much the words and the music mean to them.

But as music, and a cappella music specifically, it's just too basic and monotonous to sustain interest.

Virtually the entire CD features music, arrangements and/or entirely original compositions by Savage, and I'd say he shows promise as a modern-day hymnwriter but lacks a certain sophistication. In places, there are flashes of harmonic inventiveness and OK, so religious hymns may not be the place for significant rhythmic and lyrical complexity. Nevertheless, there is a "sameness" to so much of the material — the Music Theory 101 chord progressions, the mostly rudimentary, block-chord, ooh-ahh or unison arrangements, the thoroughly vertical rhythms, the unvaried dynamics, the simplicity of the lyrics — that one track became almost indistinguishable from another.

Production, by Michael Vossler, is also no help to these gentlemen as the album sounds as though it has been auto-tuned within an inch of its life. There is no question that with only 2 singers, vocal manipulation was going to be a necessary evil. But the voices have been treated with such a metallic sheen that they sound almost mechanical at times. What's more, while the (assumed) auto-tuning does yield some barbershop-worthy ringing chords, the cumulative effect gave me a headache.

Understand that I do not relish offering negative comments on a CD with a lofty and admirable purpose. And taken individually, one or two of the tracks might make a nice addition to a more traditional iPod playlist of Christian music. But as a cappella, there's nothing here that you can't hear elsewhere in more engaging and enjoyable fashion.

In a community where we often discuss achieving musical balance between voice parts, and a sonic balance between the vocals and production, it's highly unusual to hear a full a cappella album with just two voices present. Does it sound empty? Strangely, not really. Intense levels of doubling and attention to mixing makes the risky two-man approach workable. Does it sound boring? Despite the jam-packed assortment of original tunes and interesting harmonics, yeah, it does sound boring.

There are just too many mid-tempo, quarter note driven, little-to-no dynamic pieces comprising Join 2 Sing. Songs flow indifferently from one to the next, with a slight turn for the better on Vessel of Honor, where beauty reigns and mass listener appeal is possible. An engineering effort is employed on the short track Let God Guide, which feels more like a dramatic intro to an alubm, and thus sounds wildly out of place at the end of Join 2 Sing. Since these two are trying to achieve so much with but two voices, more production choices would have created more diversity. But fundamentally, more arrangement styles are necessary to keep the listener's attention. While definitely more interesting than standard and predictable Sunday hymns, Savage's style certainly becomes standardized and predictable by the album's end.

I suggest 2Praise listen to groups who push the a cappella religious genre boundaries through style fusion and originality, like Chapter 6 and Six13. Work hard to give arrangements unique twists, experiment with production, and keep refining your musicianship so you're the next must-hear group.