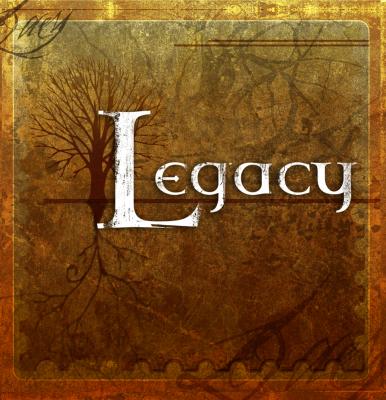 In its fifth year of existence, Legacy is a Christian a cappella quartet based out of Lubbock, Texas that strives to achieve a successful, modern contemporary a cappella sound with faith-based song choices. Unfortunately, they come up short with banal arrangements, lackluster backgrounds to support average soloists, and post-production that seems to cover up for shortcomings instead of enhancing solid musicianship.

Josh Wheeler performs all of the vocal percussion and bass and is the only of the four without a solo, while John Paul Sheppard and Jake Lierman dominate the ten tracks as soloists (Clint Dickerson has one solo). With the exception of two songs that were arranged outside of the group (such as Beautiful Like This), every song has a walking bass, a soloist, canned vocal percussion, and two background singers who alternate from "ooh"s and "aah"s to lyrics that respond to the soloist's words. I know that singing heard in churches often reflects the style of call and response with a lead soloist singing words and choir members responding back with select phrases, and this can repeat many times over. However, this formula simply does not translate well with a contemporary a cappella production, and is used all too often for tracks such as Who Is Here, Make A Difference, and Now To Him. If there were more passion in the background to reflect what the soloists are trying to do, it would've been more believable, but at times the singing felt robotic and disjointed.

In production, the bass is over-amplified, trying to make up for an otherwise empty sound, and the mere fact that the octaves are dropped separates Wheeler's singing a bit too much from the rest of the singers. Some choices in production were just useless, like starting the album with someone blowing a pitch pipe on Living On the Edge. The song then sound like it's sung through a megaphone or in a live setting for 30 seconds, and transitions into the richer production that continues throughout the album. I Will Praise Your Name uses too much reverberation and auto-tune (think of the auto-tune sound you may know from Cher's Believe), though Jake Lierman saves the song a bit with a passionate solo and nice use of his vibrato.

Legacy is clearly comfortable with having a quartet sing more than four parts (as shown by using Wheeler to sing both VP and bass on the album) and I believe that richer arrangements, even if limited to only four parts, would greatly help them in their next studio efforts. In addition, relying less on a full bass sound and more on an overall cohesion between how the bass, chords and soloists sound together on each track will help them achieve a better end result.

Fair disclosure: I'm an upper-middle class agnostic and a political moderate with conservative leanings. I find this album a little offensive. Lyrics like "Brothers and sisters, we're living in a lost world. Satan is after us every single corner we turn. Well, we need to stay strong, we need to carry on so that we can share the news. We've got to preach the word to a lost and dying world." rub harshly against my guardedly optimistic worldview and my image of humanity. For philosophical reasons, this is an album I will never touch again after this review. Listeners of a similar mindset beware. Fortunately, the message is separable from the medium, partly because the music and lyrics have little connection, a theme I notice in much contemporary worship music.

Legacy wrote about half the songs on the album, while the rest sound as if it were adapted from "The Generic Worship and Praise Book of Songs". Most of the album forces clichéed praise phrases into a formless musical style that is vaguely related to pop music (like this passage from the R&B-tinged Make A Difference: "and his name is Jesus christ, the son of God, the perfect Messiah, and through him we shall find, we'll find eternal life"). I'm not talking Michael Jackson or Madonna here, but a generic composition style that has almost no independent musical personality. Instead, the music serves only as a platform for religious declarations. The music itself is flavorless.

Most songs rely on a structure of block chords and repeated lyrics. It's a bland format, but one at which Legacy excels. The group is technically good. They can blend pure vowels and warm tones with the best. Each chord is nicely spread and balanced, with deep, resounding lows and soaring highs. The album sounds good; it's well produced. But when the background offers only blocks and phrases repeated after the solo ("I'm gonna' make a diff-uh-rence", "we've got to preach the word whoa oh oh"), there isn't much left to interest the musically-minded.

All that's left is the soloist and the lyrics, and so they become the focal point of each song. Soloists sing with the conviction of true believers, the warm and rounded tones of a televangelical choir leader, and a vibrato as big and wide as the heavens. These guys have great voices, colorful and pleasing.

In the end, I wished Legacy were singing about something else or through the veil of love song imagery. The "lay it right out there" approach of church praise songs always makes my eyes glaze over — just before they begin to roll. But elementary songwriting and occasionally inflammatory lyrics like "help me to make a difference, bringing souls to you" offered me little else to enjoy.

Legacy, the debut release from the Lubbock-based group of the same name, takes a decidedly minimalist and old-school approach to its source material, a collection of Christian-themed music written both by group members and outside sources. And while the album is successful in conveying the strong emotional connection Legacy has to its music and message, as a part of the modern a cappella canon it is wholly middle-of-the-road.

Having made the choice to bypass studio trickery for a more natural sound, Legacy left itself vulnerable to making a slew of mistakes that would have all but wrecked the album, but the group's hard work in the studio and rehearsal shows, as tuning holds up very well throughout the disc. The individual members are also competent soloists, all above average, but there are no jaw-dropping performances to be found on Legacy. Josh Lierman comes closest to that when he belts on Beautiful Lamb, but his voice lacked the same strength when the song required him to pull back.

If any one thing holds Legacy down, it is the arrangements, which favor a style that exposes the bass line and provides little support to the soloist. Verses consistently exhibit multi-part harmony that cuts before the end of a line, exposing the bass and giving seven of the ten songs a markedly empty sound. This style, which often has multiple parts singing the same rhythm, also calls unwanted attention to occasional sloppy entrances and cutoffs. Syllable choice is dull and monotonous, especially for the bass, whose only respite from "bum" and "dim" comes in a few measures of Without Love. On the whole, arrangements could have benefited from less repetition and more care towards building a full sound.

The album's two bright spots come on songs arranged outside of the group, I Will Praise Your Name and Beautiful Like This. Legacy's own Josh Wheeler wrote the former, whose lyrics, though predictable, are still moving, and whose arrangement (by M. Isaac Graul) abandons the style of the rest of the album by giving the bass part its own countermelody. Though the bass comes across a little strong, the fuller sound and Lierman's strong solo make this a memorable track. Bryan Rogers' arrangement of Beautiful Like This is equally impressive and does not seem to drag, despite being more than five minutes long.

Though Legacy's cause is noble, their methods could use some updating. Even Legacy's liner notes give off an old, homemade feeling (not to mention the font they chose to use is near impossible to read). But the two just-mentioned tracks hint at what the group's next album could be. Legacy sings well, executes well in the studio, and could, with a change of outlook, record an album full of good songs, instead of one just sprinkled with them.