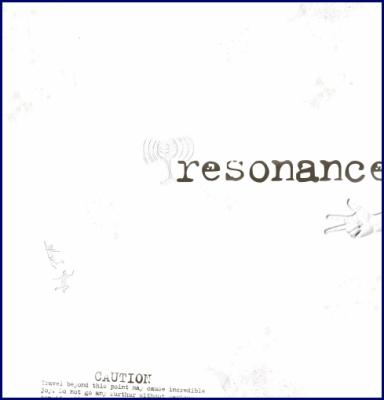 Resonance knows how to get a big reaction. From their talents at original songwriting with bittersweet So Little Notice, to their big-bang holy $*!# Snakes on a Plane closer, every song on this self-titled album is interesting and worth hearing.

At the heart of their talent and success resides masterful arranging. David Vincent dominates the line-up and makes his audience marvel at his gift. Each of David's arrangements steadily evolve and strengthen, taking the listener through distinct, fascinating sections. Actually, each song's sections feel comparable to well-defined movements of a symphony. Arrangements this thoughtful and layered rarely roll by at the collegiate level.

While many groups blow a bridge by not taking advantage of their chance to show creativity (sometimes omitting a bridge altogether), there are show-stopping legends on resonance. Carrie Niziolek's take on The Walk, with its sudden and stark contrast between the bass and soaring soprano, and the party atmosphere of David's I Want You, contain two incredibly cool and original bridges. But honestly, all ten tracks have their own "wow" factor to enjoy. From start to finish, each song feels complete and sounds compelling.

You'll definitely want to add highly satisfying resonance. to your a cappella collection. With the raw vocal talent, excellent production, and outstanding arrangements, it could certainly be a contender for your favorite a cappella album.

When I saw the track list for MIT Resonance's self-titled album, I was ready to hate it. To my pleasant surprise, I couldn't help but enjoy nearly all the tracks.

David Vincent, who produced resonance., has put together a more cohesive album than most of what I hear these days. The mixing fortifies the sound design of each arrangement, rarely distracting.

Two technical flaws and one artistic flaw undermine the album. The leads rush on many of the songs, most egregiously on You Oughta Know and on Fighter. In the Pro Tools era, there is simply no excuse for letting timing issues slip through the editing phase. A rushed lead sucks the groove out of a song, replacing it with aural vertigo. The second technical issue is harder to pinpoint, but it sounds like a mastering oversight. There are some weird sonic cavities in some of the songs — sporadic hollowness in the mix and tinny-ness in the female parts at the ends of Sins and You Oughta Know — and the kicks are anemic throughout the album, nearly always weaker than the snares. Finally, though texturally creative, nearly all the arrangements lock into vertical mode and stay there, meaning I get no sense of line or phrasing. The only lines I hear are bar lines.

Luckily, the textural creativity, the excellent syllable execution, and the mixing all go a long way toward hiding these issues.

I commend Resonance for their inclusion of the original song, So Little Notice. Regrettably, the execution fails to live up to the fairly ambitious song. Some strange syllable choices and voice-leading problems distract me quite a bit. Granted, there are some tricky transitions to deal with, but a less vertical arranging approach would yield more elegant solutions.

Now some rants. Later some raves.

I Write Sins, Not Tragedies, an irritating song to which I hope to never again subject my ears, doesn't, against all odds, make me ill. The ending is pretty spectacular, actually. The problem is that the lead, much the like original, is vastly oversung. I would much rather hear a genuine take on the song (or really just a different song entirely).

The valiant attempt at a creative, funky take on Harder to Breathe doesn't quite work out. The lead and sopranos are much too tuned, and the percussion needs to go either all-out organic or all-out electronica. The bridge recovers nicely, however, and I love the ending.

Koyel Bhattacharyya on Fighter drops my jaw during her improvised sections, but then through the body of the song adopts a thinner, more demure sound. She is also mixed too low and too muffled. The intro and outro ooze style and attitude, making the rest of the song, by contrast, an uninteresting listen. The aggressive tenor rhythm at 1:01 is really distracting.

David Vincent knows his vocal percussion. Though not nearly as consistently impressive as the Cornell Chordials' similarly styled percussion, his fills and rolls really enhance the songs. I like the organic moments, but I like the more complex samplings too.

I Want You boasts some cool flanging in the backs. The lead has a warm, intimate tone, and the ending is fun.

Finally, The Walk. Carrie Nikiolek's arrangement and Jia Lou's lead are unrivaled on the album. Resonance's lovely textures are there, but this arrangement delivers a clear emotional arc as well as graceful phrasing and line. Jia Lou has a darker tone than Imogen Heap, but she takes ownership of the solo and nails the flip in her own way.

Impressive. That is the first word to come to mind while the first notes of MIT Resonance's new recording unfold. MIT Resonance has carefully selected their gifts, taken them to the mall to be professionally gift-wrapped, and placed great care in choosing just the right color bow and poignant card to accompany their brand new self-titled CD, resonance. This listener is quite flattered they took the time to provide such a thoughtful present to the a cappella community, but you will still find this listener in the return line the day after Christmas.

My compliments to the staff for limiting this release to only ten tracks. Although I'll never know for sure, I believe this choice alone has increased the quality of the album significantly. My reasoning? There are no clear runaways in the great or poor categories. Mr. Brightside has the only slight edge above the crowd here with treatment akin to a major label touting a new single — the percussion a little tighter, the effects a little more present. It's the best track on the album, but not by much. This speaks to the group's commitment to quality across the board as much as anything. The best part of the album is consistently the backing vocals with appropriate energy, soaring crescendos, and open vowel sounds which leave the listener in a permanent state of relaxation. MIT Resonance has taken a page out of their Tufts neighbors and crafted a responsive block that would make any Amalgamates fan sit up and take notice (most notable in this style are The Walk and So Little Notice).

Production is present throughout, and while not overbearing, could still produce an effective album by taking a step backwards with the block and soloists benefiting the most from this. Most notable is the intro to I Write Sins, Not Tragedies where the pizzicato string intro and solo entrance is greatly hampered by the effect placed on top of the backing vocals. Rather than sounding warm and inviting, the voices are short and electronic.

For any group out there searching for a production method to get the most out of their vocal percussionist, dial up the producers of this album (Viktor Kray and Bill Hare). The kick drum and tom sounds are some of the most realistic I've heard consistently throughout an album.

I enjoyed David Vincent's arrangements, including a definitive version of I Want You by Savage Garden that brings me back to the late 90s. On an album where there is a sophisticated level of sameness to each track, this rendition is a welcome addition. He also serves up Bring It, the infamous Snakes on a Plane single that has swept over college campuses everywhere. While I don't quite understand the popularity of the movie or the music, fans of the B movie genre should be pleased with Michael Borohovski's driving solo and the lines from the movie woven throughout.

Impressive. This is the word I find to describe a group that formed in 2001 and has quickly ascended to the top of the collegiate ranks. A cappella aficionados may not rush out to buy this album, but upon listening will certainly be able to stand back and appreciate the carefully crafted gift MIT Resonance has offered up this season. The absence of tracks I want (need) to return to again and again for repeat listening is the reason you'll find me in the return line. I already own this recording. It just has a different college name at the top. I think Resonance has all the tools to take everything they like about groups from across the country and add their own unique signature to college a cappella. All it takes is a bit of courage to be different and a willingness to play to their strengths. Will Resonance be the group that changed the tide? Only time will tell.